Women who went to prison for killing their abusive partners are starting over at Home Free, an apartment complex created by design volunteers in San Francisco. 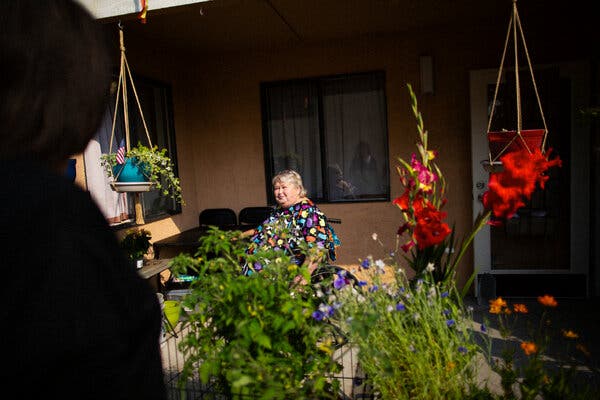 Rosemary Dyer on her patio at the transitional housing complex Home Free, where she has lived since her sentence for killing her abusive husband was commuted.Credit...Talia Herman for The New York Times

Nestled on her Chesterfield sofa, her electric wheelchair close at hand, Rosemary Dyer surveyed the glittering peacock figurines she had snapped up on her first solo trip to San Francisco’s Chinatown after leaving prison, and admired the bright tablecloth with silk flowers in her new living room.

Dyer, an effervescent woman with a mischievous sense of humor, brought these and other prized possessions to Home Free, a new complex of transitional apartments in San Francisco. It was designed for women who have been imprisoned for killing her abusive partner or being at the scene of a crime under the coercion of an abusive spouse or boyfriend. Dyer was convicted of murder and sentenced to life in prison without parole in 1988 for the 1985 shooting death of her husband of eight years, who had abused and tortured her, in an era when expert testimony related to domestic violence and its effects was not permissible in court in most states.

The insidious viciousness that defined her life included being repeatedly beaten, and sodomized with a loaded handgun. Her husband had dug a grave in the backyard, saying he intended to bury her alive.

The interior design for the apartments on Treasure Island, the former home of a naval base, was the work of students at the Academy of Art University in San Francisco and other volunteers. Retailers donated furniture and linens to the renovated units.Credit...Talia Herman for The New York Times

In an apartment ready for re-entry, paintings were donated by students of the Academy of Art University.Credit...Talia Herman for The New York Times

Home Free — where Dyer’s 2020 commutation from Gov. Gavin Newsom hangs proudly on the wall — was created by Five Keys Schools and Programs, a statewide nonprofit that provides education, vocational training, therapeutic programs and housing for incarcerated people and the newly released. The complex of five two-bedroom apartments is the result of years of advocacy by survivors of intimate-partner violence, and organizations working with them. Their efforts allowed women like Dyer to achieve release through clemency or by retroactively introducing evidence of their abuse to the state parole board or the courts.

“That women who had unspeakable violence committed against them were not allowed to bring in evidence of the abuse is the quintessential injustice,” said Sunny Schwartz, the founder of Five Keys. “We were committed to making a vibrant, dignified and safe home, a place that says ‘you’re worthy.’ ”

Previous transitional housing options for women were largely limited to those treating addiction. Home Free, on Treasure Island, a former Naval base in San Francisco Bay, was forged during the pandemic last year on a tight start-up budget of $750,000, including staff. The formerly grimy apartments were renovated with the help of nearly 100 volunteers — architects and landscape architects, flooring and cabinetry installers, plumbers, haulers, electricians and city construction apprentices. They all gathered on this somewhat bizarre island originally built for the 1939 Golden Gate International Exhibition.

The landscaping is largely in the form of container gardens of flowers and trees because the land is tainted by chemicals. Mithun, a design firm, help get the trees donated.Credit...Talia Herman for The New York Times

Interior design students from the Academy of Art University in San Francisco devoted a semester to the project, joining mini-charettes on Zoom with Irving A. Gonzales of G7 Architects. They also brainstormed with the women, whose desires included full-length mirrors (they had been deprived in prison of eyeballing their shape for years).

“We wanted color!” said Dyer, who visited the construction site while she was still in temporary housing. She and others had a particular aversion to gray, a shade associated with metal prison bunks and lockers.

A 69-year-old cancer survivor with congestive heart failure, Dyer has used a wheelchair since she injured her hip in prison. A huge pirate flag — a nod to the Treasure Island theme — greets visitors upon arrival. Her accessible apartment adjoins a patio where she grows pots of tomatoes and radishes.

The landscape itself was designed by Hyunch Sung, of the firm Mithun, who chose 10 different tree species. (Because Treasure Island’s soil is tainted by industrial chemicals, the trees are planted in brightly-painted containers.) Sung said she approached her work there as if she were designing for high-end clients. “The idea of beauty is underplayed for disadvantaged communities,” she said.

Nilda Palacios, 38, who lives upstairs, said it was “emotionally moving” to join the complex. She grew up with a history of abuse: She was molested as a child by an uncle and stepfather and then raped as a 15-year-old by a high school teacher. The stressful trial of the teacher led her to rely on drugs and alcohol (“I was trying to sleep my life away,” she said). Palacios became distraught and suicidal. When a panhandler cornered her one day, she said, she thought he intended to attack her and “lashed out,” strangling him. She was convicted of second-degree murder. Incarcerated for 17 years, she benefited from therapists in prison who helped her understand “how the depth of my crime was related to my history,” she said. “I confused someone who wasn’t a threat with someone who was.”

Nilda Palacios, 38, with her dog, Milo, in their Home Free apartment. Therapists helped her understand the relationship between her own traumas and the violent act that led to her imprisonment for 17 years.Credit...Talia Herman for The New York Times

Palacios was released on parole. She has benefited from a more expansive vision for Home Free, which now welcome women like her, whose crimes were linked directly to their abuse.

Moving in, she was “shocked” at the prospect of a private bedroom after years of sharing an 8-x-10-foot cell and cramming all her belongings into a six-cubic-foot box, with, as a current inmate puts it, “your panties right against the noodles and peanut butter.”

“No way, this is my room?” Palacios recalled. “It felt to me like a real home.”

A Path to Humane Housing

The idea for Home Free was born during a conversation between Schwartz, its founder, and the California State Treasurer Fiona Ma, then a state assemblywoman. Ma’s legislation, signed by Gov. Jerry Brown in 2012, allowed women who had suffered domestic abuse and been convicted of violent felonies related to their abuse the opportunity to have their cases reheard using Battered Women’s Syndrome (as it was then called) as a defense. The legislation also gave them the right to present evidence of abuse by intimate partners during the parole process. It applied to those convicted before August 1996.

From left, Tammy Cooper Garvin, residential coordinator of Home Free, and Sunny Schwartz, the founder of Five Keys Home Free, the group behind the project.Credit...Talia Herman for The New York Times

The number of Rosemary Dyers still behind bars is unknown. About 12,000 women are currently incarcerated for homicide offenses nationally, said Debbie Mukamal, the executive director of the Stanford Criminal Justice Center at Stanford Law School and the director of the Regilla Project, a three-year effort to study the frequency with which women in the United States are imprisoned for killing their abusers. Small studies, including one in Canada, suggest that 65% of women serving a life sentence for murdering their intimate partners had been abused by them before the offense. The link between abuse and violent crime was underscored by grim statistics in a 1999 U.S. Department of Justice report showing that a quarter to a third of incarcerated women had been abused as juveniles and a quarter to almost half as adults.

Despite increased public awareness, “there are still a vast number of criminal attorneys who don’t understand how intimate-partner violence creates the context for a crime,” said Leigh Goodmark, director of the gender violence clinic at the University of Maryland School of Law.

In New York State, the Domestic Violence Survivors Justice Act, enacted in 2019, was put to the test in the much-publicized case of Nicole Addimando, a young mother of two in Poughkeepsie who fatally shot her live-in boyfriend and father of her children in 2017 after years of harrowing abuse (the case is dramatically captured in the documentary film “And So I Stayed.”)

Sentenced to 19 years to life for second-degree murder, Addimando was entitled to a subsequent hearing under the Act, where her claims of abuse might be factored into a reduced sentence. The county court judge rejected those claims, believing she “had the opportunity to safely leave her abuser.” In July, the state Supreme Court’s Appellate Division reversed that decision, reducing Ms. Addimando’s time behind bars to 7 ½ years.

To Kate Mogulescu, an associate professor at Brooklyn Law School and director of its Survivors Justice Project, the case illustrates “the impossible burdens we put on survivors to prove their victimization.” Women are scrutinized in court in ways that are very different from men, she added. “With women, they’re a bad mother, or promiscuous. Tropes get trotted out on women and the punishments reflect that.” Nevertheless, so far, 16 women have been resentenced in New York.

By far the most common reason women who have been abused by intimate partners wind up in prison is the so-called accomplice laws, in which a victim is coerced into being at the scene of an abuser’s violence, such as driving the getaway car, said Colby Lenz, a co-founder of Survived and Punished, a national advocacy organization.

That was the case with Tammy Cooper Garvin, who was sex trafficked at age 14 and was imprisoned for 28 years for being in the car while her pimp murdered a client. Her sentence was commuted and she was hired by Home Free as its residential coordinator.

Rosemary Dyer, 69, outside her  apartment in the garden she calls “Freedom Forest” provided by Five Keys Home Free.Credit...Talia Herman for The New York Times

Another advocate — and a guiding force behind the founding of Home Free — is a fellow survivor named Brenda Clubine, who started a weekly support group at the California Institution for Women. Some 72 women soon joined. Dyer was one of the original members, though until Clubine encouraged her, she was so terrified of life that she could hardly speak.

Clubine herself had sustained years of abuse, including fractures and stab wounds, by her husband, a former police detective She hit his head with a wine bottle and he died of blunt force trauma. She served 26 years of a 16-to-life sentence. Her fierce retelling of the stories of the women in the prison group — which she sent to state legislators and governors — led to public hearings and the 2009 documentary “Sin by Silence,” which in turn inspired the California laws.

Clubine’s close friendship with Dyer has continued and is pivotal to Dyer’s rebounding confidence. At Home Free, Dyer now revels in making homemade noodles with chicken from her grandmother’s recipe. Clubine, her BFF, observed that a safe and fortifying place for her “sisters” has been a long time coming. “I can’t say how full my heart feels that it’s available to them now,” she said.