Behind the Science of AI Innovation: Five Fascinating Facts

With every passing day, artificial intelligence (AI) is receiving immense recognition worldwide, especially during the pandemic.

In 1955, AI was developed by John McCarthy who described AI as a quick means of doing any task that normally requires natural intelligence. In recent years, AI has been used to build robots or agents that can mimic human behavior and work on different tasks. Basically, AI uses human intelligence programmed into machines (such as computers and mobile devices) to develop human-like responses and characteristics.

Undoubtedly, the internet has provided widespread and easy access to these AI-driven services. AI is not only useful in tech or other industries but has already found its way into our daily lives. You interact with AI several times a day when you talk to Siri or rely on Netflix to offer better viewing suggestions.

Although artificial intelligence applications are widely accepted and publicized, however, there are some facts that are still hidden.

Due to this lack of exposure, many people don’t understand the potential of artificial intelligence. Listed below are five fascinating and mind-bending facts related to AI which didn’t get much public exposure.

1. The majority of AI bots are female.

According to different studies, people feel more attracted to the female voice than the male voice. Think of Siri and Alexa. Every time you ask a question, you will get an answer in a polite and pleasant woman’s voice.

Although women are underrepresented in the tech industry itself, you normally get a women’s voice response integrated into many AI-based services. Another justification for this fact may be the specialists working on artificial intelligence are mostly men. Sadly, only 22% of professionals working with artificial intelligence are women. Most of them work as secretaries or assistants.

2. Your household pets are about to get more intelligent!

Nothing can compare with real pets as they are loveable and give you loyalty and pleasure. However, AI science is always one step ahead of what a human mind can perceive.

There are a few setbacks to having real pets, such as keeping a proper check and balance of their diet and cleaning. Soon, AI-powered pets will remove these struggles and look, feel, and behave like real pets. Analysts expect these AI-powered pets will find their way to the markets by 2025. 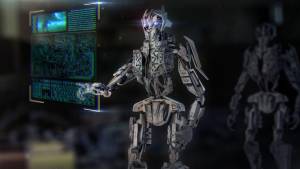 3. Bots develop familiarity with people through their voices.

In January 2018, Sundar Pichai, Google CEO, said that AI technology would be transferred to consumers far more widely than by purchasing some electric machine. As a result, global demands for data scientists are increasing due to the increased workload.

In a recent report, PWC predicted that AI-driven activities have the potential to increase the global GDP by 15% by 2030, which is equal to USD $15.7 trillion.

As a result, experts expect that the AI assistants would be able to recognize the human voice and perform work accordingly. This will help businesses to reach the highest potential faster than ever.

4. An AI-enabled bot can heal itself.

Typically, it takes a lot of effort to look for the right service company to fix your robot if it’s not working efficiently. Doesn’t it sound better to have robots that can repair themselves without any external human help?

If you haven’t thought about it before, consider the possibilities. It’s not a pipe dream. With the progress in AI technology efficiencies, such robots are now available that can automatically repair them.

It’s not as simple as a machine diagnosing a common system error. Instead, it’s a way to figure out that there is something wrong with their performance. After finding such errors, they can quickly troubleshoot themselves.

In the world of artificial intelligence, innovations have taken over the globe. Experts accept the idea that AI has the ability to learn things with time. This learning ability leads to an increase in the intelligence levels of AI-derived services.

In 2013 the intelligence level of AI was comparable to a four-year-old. However, analysts predict that in 2029 it will reach that of a human adult. Additionally, it will keep on increasing to the highest level possible. This intelligence factor may lead to replacing the human workforce due to reduced business costs and smart problem-solving abilities.

No one can deny the buzz and hype AI has created in many industries. It has received much attention from industry players and investors. Many businesses have started integrating artificial intelligence into their machines and deploying automation to perform different tasks.

Moreover, this technology has solidified its place in many spheres of human life. In short, it is changing the way we live and work.

This is undoubtedly the most recent (and obviously daunting) technological advancement. The next generation is going to witness unimagined innovation and social upheaval which promises to change human lifestyles to a great extent.