Joe Biden has won the 2020 presidential election, the Associated Press projected Saturday, sending President Trump to a bitter defeat four years after he shocked the world by winning the White House with victory over Hillary Clinton. Yahoo News is providing complete coverage, with live updates and reaction to Biden’s historic win.

How Biden will govern — if he can govern at all

Trump lost — so what happens to the GOP?

How history will view Trump — and us

The latest on key races:

• Pennsylvania: The Associated Press called the state for Biden on Saturday, giving the Democrat more than the 270 electoral votes he needed to secure the presidency.
• Arizona: The AP called Arizona for Biden around 2:30 a.m. ET on Wednesday.
• Nevada: At 12:15 p.m. ET on Saturday, the AP called the Silver State for Joe Biden.
• Georgia: Biden holds a tiny lead and the secretary of state has already announced that there will be a recount.
• North Carolina: Though Trump prematurely declared victory here early Wednesday, this race is too early to call.

Electoral vote count: A candidate needs at least 270 electoral votes — a majority of the 538 votes in the Electoral College — to become president of the United States. Here's where the count stands:

COVID and the election:

While the votes continue to be counted, the number of U.S. coronavirus cases continues to climb. There were a record 122,000 cases reported Friday, adding to the total of more than 9.7 million who've been infected. More than 237,000 Americans have died so far this year. 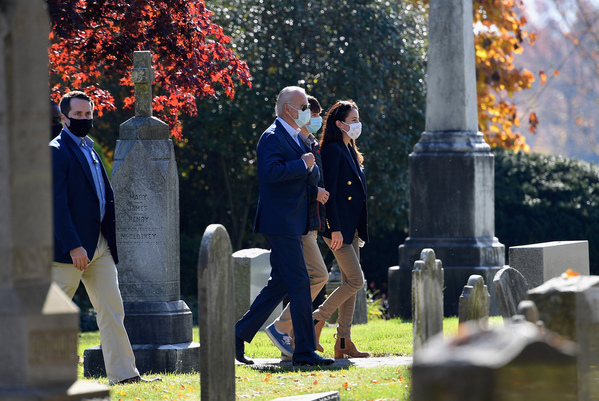 The president-elect arrives at St. Joseph on the Brandywine Roman Catholic Church in Wilmington, Del., on Nov 8. (Photo by Angela Weiss / AFP)

President-elect Joe Biden on Sunday attended church services at St. Joseph on the Brandywine in Wilmington, Del., with his daughter, Ashley Biden, and his grandson Hunter. After mass, he visited the the cemetery where his son Beau, his first wife, Neilia, and their daughter, Naomi, are buried.

President Trump, who has yet to concede the race, traveled to his golf resort in Sterling, Va., where he was on Saturday when the election was called for Biden. 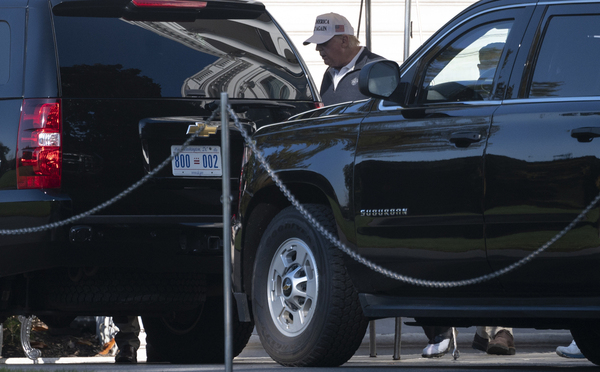 President Trump walks to his motorcade on the South Lawn of the White House before traveling to his golf resort in Virginia Sunday. (Photo by Andrew Caballero-Reynolds / AFP via Getty Images)

Mitt Romney knows something about losing a presidential race: He's lost twice before, in the GOP primary in 2008, and four years later as the Republican nominee.

As the country and world wait to see how President Trump reacts to his loss in the 2020 contest, Romney says they shouldn’t expect him to adapt the typical posture of a defeated candidate: a rueful concession of a hard-fought battle, thanks offered for the efforts of his campaign staff, a pledge to work with the winner on behalf of the nation.

"I would prefer to see the world watching a more graceful departure, but that's just not in the nature of the man," the Utah senator said Sunday in an interview on CNN's "State of the Union." 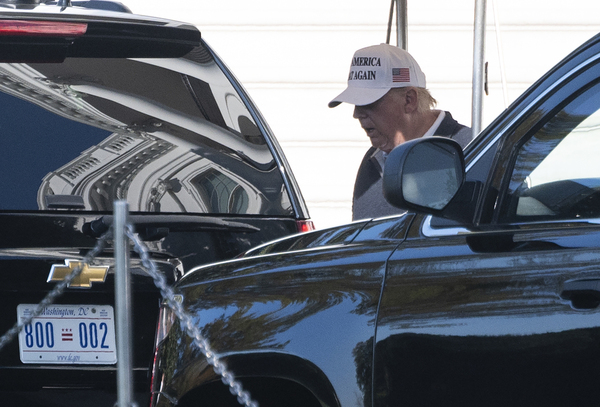 President Trump walks to his motorcade on the South Lawn of the White House on Nov. 8. (Photo by ANDREW CABALLERO-REYNOLDS/AFP via Getty Images)

Netanyahu, who has shared close ties with Trump throughout his presidency, delivered well-wishes to Biden and Harris hours after many other world leaders had made public statements following the announcement that Trump's Democratic opponent would become the 46th president of the United States.

On Sunday morning, the president took to Twitter, where he still did not acknowledge that his opponent would become the 46th President of the United States. Instead, Trump sent a series of tweets, the first of which he attributed to law professor Jonathan Turley, who testified as an anti-impeachment witness during the Judiciary Committee hearings almost a year ago. The tweets sought to highlight allegations of voter fraud, declaring that the election was still in the "tabulation stage" of the process. (Trump himself had falsely declared victory in states that were still too close to call last week.)

"[W]hat concerns me is that we had over a hundred million mail-in ballot in cites like Philladelphia [sic] and Detroit with a long series of election problems (to put it mildly)," the tweets said in part, though there is no persuasive evidence that any fraudulent activity occurred. He also reiterated his baseless claim that "this was a stolen election" in subsequent tweets quoting former Republican Speaker of the House Newt Gingrich.

Trump's campaign also issued a statement Saturday morning from president, who insisted Biden had not won the race that all major news outlets have determined that the Democrat had, in fact, won.

Alaska Republican Sen. Lisa Murkowski congratulated President-elect Joe Biden and Vice President-elect Kamala Harris in a tweet late Saturday night, saying she will "work with them to do what is right for Alaska."

Few top Republicans have sent public statements of support since Biden was declared the winner of the 2020 presidential election on Saturday. Sen. Mitt Romney of Utah, who was the 2012 GOP presidential nominee, was the first Republican senator to congratulate Biden and Harris.