Coming of Age on Mars

In the winter of 2004, Sarah Stewart Johnson, then a graduate student at the Massachusetts Institute of Technology, was on a field trip in the desert east of California’s Sierra Nevada. While learning to map geological terrains, she fell prey to an adolescent thrill. Boulders were perched on ledges; when nobody was watching, she would strain and push one over the edge just to watch it roll hundreds of feet, crash and break apart.

“It was just the power of it,” she said recently in an interview. “It would just echo up through that emptiness. The dust would come up and the boulder would clang into the rocks as it barreled down.”

The anecdote is one of many that Dr. Johnson, 41, relates in her first book, “The Sirens of Mars: Searching for Life on Another World,” which was published earlier this month. Part history, part science lesson and part memoir, the book is full of inside stories about the quest to find life, or something, on Mars, a planet we have been invading ever since the space age began.

When I read that rock-rolling passage I felt a shock of recognition, having had similar escapades with my friends in the Cascade Mountains of Washington as a youngster. But it was more than just rock-rolling we shared; it was the endless allure of Mars, that beacon of otherness looming red in the sky.

Interest in the red planet is again reaching a crescendo, with the launch of three robot missions to Mars, including NASA’s Perseverance rover, which will collect rock and dirt samples to be sent back to Earth. The planet itself is growing brighter in the sky as it edges closer in its orbit, bringing with it renewed questions about possible extraterrestrial life.

“Mars has been our mirror, our foil, a telltale reflection of what has been deepest in our hearts,” Dr. Johnson writes in the book’s forward. “We have seen in Mars a utopia. A wilderness. A sanctuary. An oracle. With so few landmarks, guideposts, or constraints, all is possible; without data that could be used to cabin our inquiry or limit our imagination, Mars has been a blank canvas. And tenderly, our human seeking has rushed to fill it.” 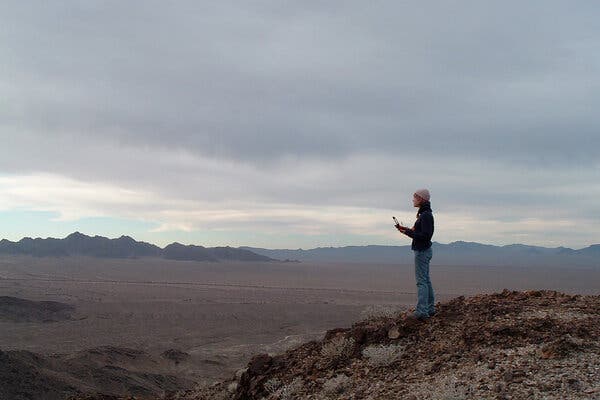 Dr. Johnson in the field in the Mojave Desert in 2004.Credit...via Sarah Johnson

The book is also a coming-of-age story for Dr. Johnson and a new generation of planetary explorers. In the next half-century, their machines are likely to determine whether anything like life as we know it resides elsewhere in the solar system.

At Georgetown, Dr. Johnson runs her own lab, which studies old rocks for signs of ancient exotic life of the sort that might be found on Mars or some other extreme world.

The lab’s website is festooned with pictures of her and colleagues combing the rocks and sands in Antarctica, Australia and the Atacama Desert in Chile, for signs of ancient life. She is also a visiting scientist at NASA’s Goddard Space Flight Center, where she is part of a team working with Curiosity, NASA’s older rover now climbing a mountain in a crater on Mars. And she hopes one day to be analyzing rocks returned from Mars in her lab.

Reached over Zoom in Kentucky, where she was visiting family, Dr. Johnson radiated an easy, unflappable manner. She responded to questions with a wide smile, as if the light had just broken on her face, and a drawn-out “Yeah” as she mulled her answers.

In “Sirens of Mars,” Dr. Johnson chronicles the personalities, the surprises, the dashed expectations and the claims — made and abandoned — of the discovery of life on Mars. It’s also a personal chronicle; the due date for her first pregnancy, in August 2012, coincided with the landing of the Curiosity rover on Mars, temporarily derailing her chances of participating in what was the biggest Mars mission yet. She watched her colleagues at the Jet Propulsion Laboratory on television, saddened that Mars might be slipping away.

“Opportunities only come around so often,” she writes. “The planets aligned and then swung apart.”

She had not set out to make herself a character in the book, she said. The project began with the habit of writing down poignant and evocative things that would never make it into scientific journals, and grew from there.

“I guess at some point it just felt like Mars deserved a different kind of treatment,” she said. “You know, something that will capture a lot of the mystery and the wonder of the whole endeavor, the whole search for life.”.

“The more we study the science, the more the beauty and profundity of it strikes you,” she continued. “And it does make you reflect on your own life and existence and geologic time scales, and what it’s like to be so small in a vast universe.”

Dr. Johnson, left, with her father and sister at a gorge near the headwaters of the Big Sandy River in eastern Kentucky, ca. 1985.Credit...via Sarah Johnson

Dr. Johnson grew up in Lexington, Ky., watching “Cosmos” with her father, a lab technician who was a geology and astronomy enthusiast. Her mother had been a teacher but stopped when her older sister, Emily, was born with Down syndrome. Dr. Johnson recalls her father dragging her and Emily to look at the exposed strata in road cuts.

“There was a point I remember when I was young where I just felt. like, Oh, this is so nerdy,” Dr. Johnson recalled.

Science fiction was not on her radar, despite the similarity of her book’s title to “The Sirens of Titan,” Kurt Vonnegut’s cosmic novel. “Little Kentucky girls, in my generation, liked the ‘Babysitter’s Club’ and ‘Sweet Valley High’ books,” she said.

She thought she might become a mathematician, but as an undergrad at Washington University in St. Louis she fell under the spell and mentorship of Raymond Arvidson , a planetary geologist. All those things she thought were nerdy became fascinating again. “It’s what I was really gravitating toward” she said.

She found her calling when she discovered a tiny fern underneath a rock on the barren slopes of Mauna Kea during a geology field trip.

“I suddenly saw something I might haunt the stratosphere for, something for which I’d fall into the sea,” she writes. “Not fame or glory or a sense of adventure, but a chance to discover the smallest breath in the deepest night and, in so doing, vanquish the void that lurked between human existence and all else in the cosmos.”

From there she skyrocketed through academia: first to M.I.T., where she earned a Ph.D. in planetary science in 2008 under Maria Zuber, a planetary geologist and Mars mapper and now the institute’s vice president for research; then to Harvard, as a Junior Fellow in the Society of Fellows.

Along the way there was what she called a “gap year” — a Rhodes scholarship, studying philosophy at Oxford — and, later, a stint as a White House Fellow. She considered applying to be an astronaut, but in the end she decided that robot probes could take her further than the space shuttle, and more safely.

Dr. Zuber called herself “blessed” to have had Dr. Johnson as a Ph.D. student. One research project involved collecting samples of simple primitive life-forms. The work sent Dr. Johnson to Denmark to help harvest DNA from Arctic ice cores, then on to the Siberian tundra, where she found bacteria that were still alive after a half-million years of dormancy, providing the oldest known viable DNA at the time. The resulting paper was one of the highest cited in the Proceedings of the National Academy of Sciences in 2007.

“That’s the way Sarah is,” Dr. Zuber said in an email. “She would look like she was bouncing around trying to zero in on something useful, and then she would do something absolutely brilliant.”

Dr. Johnson’s family came to Cambridge to see her defend her Ph.D. dissertation. Emily, her sister, was a fan of Miley Cyrus, so when Dr. Johnson gave a public lecture she added a picture of the singer to her most important slides.

“Sprinkled throughout the talk there would be a little Miley Cyrus in the corner saying ‘Whoa!’ or ‘Cosmic!’ and her sister would perk up and clap,” Dr. Zuber said. “It just shows you the kind of thoughtful person Sarah is and her extraordinary ability to communicate at all levels.”

From Harvard, Dr. Johnson went to Georgetown with an unusual joint appointment in biology and the program in science, technology and international affairs.

The work happily takes her to extreme corners of the world — deserts in Chile, Australia, Iceland and Antarctica — in search of improbable forms of life that have survived the kinds of circumstances that prevail on Mars and elsewhere out there. “Fieldwork is always tremendously exciting,” she said. “I mean, just to be at the edge of the world; it really does feel sometimes like you’re on another planet.”

She is now the mother of two children, ages 5 and 7, but that has not slowed her. She recalled strapping her son’s booster seat into the back of a 4x4 in Iceland, and taking the whole family on a fieldwork trip in Australia when her daughter was only a couple of months old and still breastfeeding. “We also met up with colleagues,” she said. “They were almost all women, so that was great.”

Her proxy rockhound, the robot Perseverance, is now about to be launched toward Mars as the flagship of this year’s flotilla. If it lands safely this winter, its mission is to procure Martian rocks and store them for return to Earth later this decade. Dr. Johnson hopes that her lab will be among those given samples to scour for evidence of ancient life.

In a warm review of “Sirens of Mars,” The Wall Street Journal described the book as “an elegy” and the search for life on the Red Planet as “a cycle of diminishing returns.” But Dr. Johnson, declaring herself an optimist, pushed back against the implication that the hunt was naïve or in vain.

Anyone with the attitude that Martian life is a lost cause, “is just not really understanding the science,” she said. “We’re looking for something small, like looking for microbes, you know. We’re not looking for little green men. But I don’t see that as any less extraordinary to find, even if it’s small.”

On Earth, she noted, a vast amount of the planet’s biomass resides underground. “We’ve barely scratched the surface of Mars,” she said.

Still, as a result of our explorations, the planet has become a real place. “And now we almost have, like, an actual mirror. We could look back from the surface of Mars and we can actually see ourselves, we can take pictures of our planet.”

Before the space age, Mars was an empty vessel; it could be almost anything, Dr. Johnson said: “And in some ways like the exoplanets are sort of like that now, you know? Yeah. You can know just enough about them that they could really hold anything. You can find another Earth.”

For an optimist it will always be a big and fertile universe.