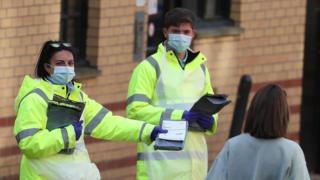 Image copyright PA Media Image caption NHS staff hand out test kits to students at Glasgow University, where there has been a Covid-19 outbreak

Students have spoken of their worry and frustration at being trapped in their university halls, in a situation described by unions as "shambolic".

Up to 1,700 students at Manchester Metropolitan University and hundreds at other institutions, including in Edinburgh and Glasgow, are self-isolating following Covid-19 outbreaks.

In Manchester students are being prevented from leaving by security.

Universities UK said the wellbeing of students was "the first priority".

Robert Halfon, the conservative chairman of the Education Select Committee, said 3,000 students were in lockdown at universities from Dundee to Exeter.

He called for the government and its scientific advisers to reassure students and families by setting out the policy for England - and warned having students in lockdown at Christmas would cause "huge anguish".

"We need updated guidance on online learning and blended learning," he said.

"Perhaps universities should consider discounts to students where their learning is disrupted and they are not having face-to-face learning with lecturers or tutors."

Manchester Met said it had introduced a 14-day self-isolation period at its accommodation at Birley and Cambridge Halls after 127 students tested positive for the virus.

Students there said they were getting ready to go out on Friday night when they looked outside to see security guards and police, who told them they could not leave.

Trisha Kakooza, from London, said: "We had eight hours to go to get food to last us for two weeks."

First-year student Joe Byrne, from Sheffield, said he was on his way out to buy food when he was met by security guards telling him he was not allowed to leave.

"We have had no warning, support or advice from the university about how we get food etc, and instead have been left completely in the dark and practically locked up against our will," he said.

"Of course we understand the aim of this and certainly agree with preventing the spread, however, we cannot be physically locked into an area with no support or guidance."

Students across all of Scotland have been told not to go to pubs, parties or restaurants over the weekend and Universities Scotland has warned students who socialise with anyone outside of their household risk losing their place at university.

Meanwhile, hundreds of students are isolating at Glasgow University because of two coronavirus clusters.

The university said it would offer a four-week rent rebate to all students in university residences in recognition of the "difficult circumstances" under which they were living.

It said those students would also be given £50 each to spend on food and it would invite local mobile food outlets to come to residences.

Reese Chamberlain, an international student at the University of Edinburgh, said his entire block at Holland House was "locked down" after a student tested positive.

"The situation is dire," he said.

"I already self-isolated when I arrived here and even then it was so difficult getting basic supplies."

On Friday night he said there was an "exodus of students", with more than 50 leaving the building.

A spokesperson for the university said it was "not asking for whole halls of student accommodation to self-isolate" but there were currently "a small number of positive cases" and the university was providing care and support to those self-isolating.

Tom, another Edinburgh student, said he was looking for an AirBnB or hotel because of reports his accommodation block was about to be put into lockdown.

He said he might return home on the train, adding: "I know there have been a few issues with parties, but we have only been here for two weeks and they are already locking us down. I don't know why we have been told to come in the first place."

University and College Union general secretary Jo Grady described the lockdown at Manchester Met as "the latest catastrophe in a week where wholly predictable - and predicted - Covid outbreaks have caused havoc".

There was "no point encouraging students to come to university to self-isolate for a fortnight", she added.

A Manchester Met spokesman said it was "fully supportive" of lockdown, adding: "Our security teams will increase patrols to support the lockdown and we will take disciplinary action against any students found to have breached requirements."

The National Union of Students (NUS) said students should be able to return to their families because being "trapped" in university accommodation would only add to the anxiety at an already difficult time.

It called for universities to support students with food deliveries and provide access to mental health services.

"We must remember this is happening because the government and universities told students to return to campus and this shambolic situation now demands flexibility," the union said in a statement.

Students "must be able to leave rental contracts, access online learning or defer, and do what it takes to prioritise their safety", the statement added.

The Department for Education said the government was working closely with universities in England to ensure they were prepared for the return of students.

A spokesman said: "Students should follow the latest health advice, just like the wider public, which means they should stay at university in the event that they have symptoms; have to isolate; there are additional restrictions imposed locally; or there is an outbreak on campus or in their accommodation."

Scotland's First Minister Nicola Sturgeon said students were "not to blame" for coronavirus outbreaks but backed universities taking disciplinary action as a "last resort" against those who broke the rules.

Universities UK, which represents 139 institutions across the UK, said the health and wellbeing of students, staff and local communities was the first priority for universities, which would continue to follow government guidance.

How are the rules affecting you? Share your experiences by emailing [email protected].