Covid-19: Meeting others in pubs to be illegal in North East 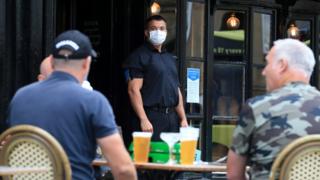 Lockdown restrictions in north-east England are to be tightened in a bid to halt the rise in Covid-19 cases.

The tougher measures will affect about two million people and were announced by Health Secretary Matt Hancock.

He said mixing between households in any indoor setting, such as pubs and restaurants, will be against the law from Wednesday.

Households in the region have been advised to avoid mixing but the new ban will be enforced with fines.

Mr Hancock told the House of Commons that cases in the region have "risen sharply" and the rate of infections is now more than 100 cases per 100,000.

Under the regulations that came into force on 18 September, people in Newcastle, Northumberland, Gateshead, North Tyneside, South Tyneside, Sunderland and County Durham were banned from socialising with other people outside of their own households or support bubbles in private homes and gardens.

They were also advised not to socialise with people outside of their household in any public venue, but that was only guidance and not banned under law.

Pubs, restaurants and other hospitality venues also remain limited to table service only and have a 22:00 curfew.

Restrictions imposed in some parts of England, including the North East, have already made it illegal to mix with other households in their homes or gardens, punishable with fines.

What's new is to extend the legal ban to all meetings with other households in indoor public venues, such as pubs and restaurants - that's what will happen from Wednesday in the seven listed areas of the North East.

So to meet someone for a drink or a meal will be in breach of the law. Workplaces won't be affected.

This is the first time in England since the full lockdown began to be eased in May that such extensive legal sanctions have been imposed.

The Department of Health said the imposition of the measures reflected high and rising rates of infection in the region though they appear to have come as a surprise to local council leaders.

Even as MPs debate whether more oversight of government-imposed restrictions is required, health officials have let it be known that further interventions in Merseyside and some other parts of the North West of England may be imminent.

"We know that a large number of these infections are taking place in indoor settings outside the home. And so, at the request of the local councils with whom we have been working closely, we will introduce legal restrictions on indoor mixing between households in any setting."

Mr Hancock did not say whether visits to other households for informal childcare - such as grandparents looking after children - will still be permitted under the revised rules.

Newcastle City Council leader Nick Forbes criticised the Health Secretary for the manner in which the announcement was made.

"While we have been in discussions with the Government on potential further restrictions, the Secretary of State has once again stood up and announced changes without telling us he was about to do so," he said.

"We want to work constructively with the Government but the way these measures are being communicated in headlines and without detail does nothing for public confidence.

"We have demanded clarity on the new restrictions, testing and support for those businesses most affected."