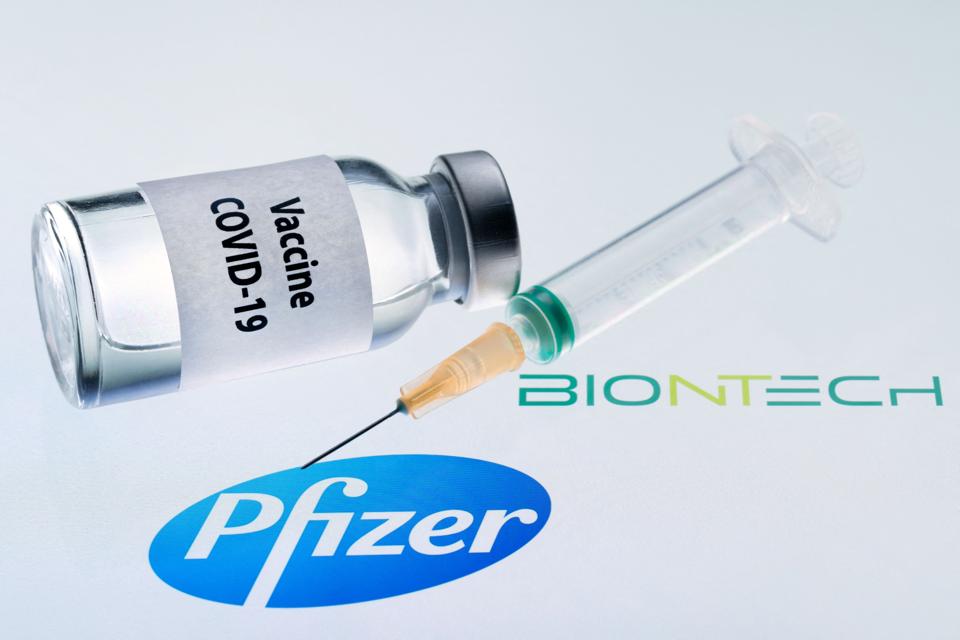 This illustration picture taken on November 23, 2020 shows a bottle reading "Vaccine Covid-19" and a ... [+] syringe next to the Pfizer and Biontech logo. - The European Commission has signed five contracts to pre-order vaccines, among which with the U.S.-German company Pfizer-BioNTech (up to 300 million doses). (Photo by JOEL SAGET / AFP) (Photo by JOEL SAGET/AFP via Getty Images)

We’ve all heard the concerns or felt concerned ourselves. Just when there’s good news about the effectiveness of a vaccine against the SARS-CoV-2 or a reduction in new cases, it seems like there’s another headline about some scary new variant of the coronavirus that’s flipped the world on its head.

Well here’s a double dose of good news: A new paper out in the journal Nature today reports that people vaccinated with two doses of the Pfizer–BioNTech COVID-19 vaccine were able to neutralize several variants of the virus, including the B.1.617.2 (or delta) variant first seen in India and B.1.525, initially identified in Nigeria.

Early this week Dr. Anthony Fauci, chief medical adviser to President Biden, warned that the Delta variant was on the rise in the US after spreading across the UK and dozens of other countries. He urged the public to get fully vaccinated, noting that two doses of the Pfizer or AstraZeneca vaccine “appear to be effective” against the variant.

The new study led by researchers in Texas involved 20 samples of blood sera from 15 people fully vaccinated with the Pfizer vaccine. While the samples were less robust in taking down the variants when compared to the initial strain of the virus from January 2020, the reaction against all variants was sufficient

“This finding indicates that the vaccine is likely to confer adequate protection against these new variants,” reads a statement from the authors.

It should be noted that a study involving just 15 individuals is much, much smaller than I would like to see, but let’s call it encouraging.

But what about all those who are unable or uninterested in being vaccinated, I hear you ask.

That was the finding in an analysis of vaccination records and test results from dozens of communities in Israel. In essence, a 2o percent increase in the number of vaccinated people in a population appeared correlated to a two-fold drop of infections among people not vaccinated.

The authors of this paper cautioned that the drop in infection could also be due to some extent to naturally acquired immunity to Covid-19.

Nonetheless, they also consider the new findings to be at least encouraging.