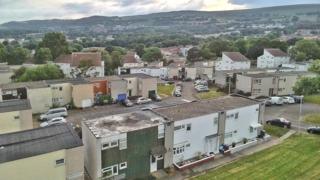 Nearly two-thirds of Wales' population will be under lockdown when new restrictions are imposed in three more areas on Monday.

From 18:00 BST, they will be in force in Neath Port Talbot, Torfaen and Vale of Glamorgan.

This will mean half of Wales' 22 local authorities will be under lockdowns, affecting almost two million people.

Torfaen council leader Anthony Hunt said: "We have already seen this strategy work effectively in Caerphilly and Newport where numbers have dropped dramatically due to people adhering to the new rules."

A businesswoman in the area said she was hoping the local lockdown would not affect her too much.

"The majority of customers are local to Torfaen and I do online as well, so I am hoping, fingers crossed, that it's not too bad," said Rosa Newton, who owns an antiques and vintage shop in Cwmbran.

Ms Newton said she felt "better prepared" for tighter restrictions this time than she did for the national lockdown in March.

"Within the shop, it's all face masks, hand sanitiser - I feel safe and I feel my customers are safe," she told BBC Radio Wales Breakfast.

"I will switch to more online shopping. We have to just switch and do what we can as a business to keep going really."

Vale of Glamorgan council leader Neil Moore said it had not been an easy decision but pointed to the rate of infection rising to 34.4 people per 100,000 in the county borough.

Image copyright Getty Images Image caption Neath Port Talbot will go into lockdown, meaning counties along the M4 corridor from Newport to Swansea will be under restrictions

"We need the help of everyone across Neath Port Talbot to prevent the increasing spread of coronavirus and to bring the infection rates back down."

He urged people not to panic buy, adding: "There is no need to be concerned about stocks running low."

Welsh local lockdown rules mean extended households are not allowed and people are barred from leaving or entering the council boundaries without a reasonable excuse.

People are allowed to travel outside the area for a limited number of reasons including going to work if they are not able to work from home, to go to school, give care or buy food or medical supplies.

Blaenau Gwent, Bridgend, Caerphilly, Merthyr Tydfil, Newport and Rhondda Cynon Taf were already under lockdown, while Llanelli in Carmarthenshire became the first town to have restrictions imposed which do not apply to the wider county.

Cardiff and Swansea both went into lockdown at 18:00 BST on Sunday.

First Minister Mark Drakeford said the position in the "north of Wales continues to be mixed".

A meeting with the leaders of all six councils in the area will take place in the next week.

"If we need to take action, we will, but the position isn't as clear there yet as it has been in the south and I want to make sure that we look at it with the detail it deserves," Mr Drakeford said.