Didi Files For US Listing, Week In Review 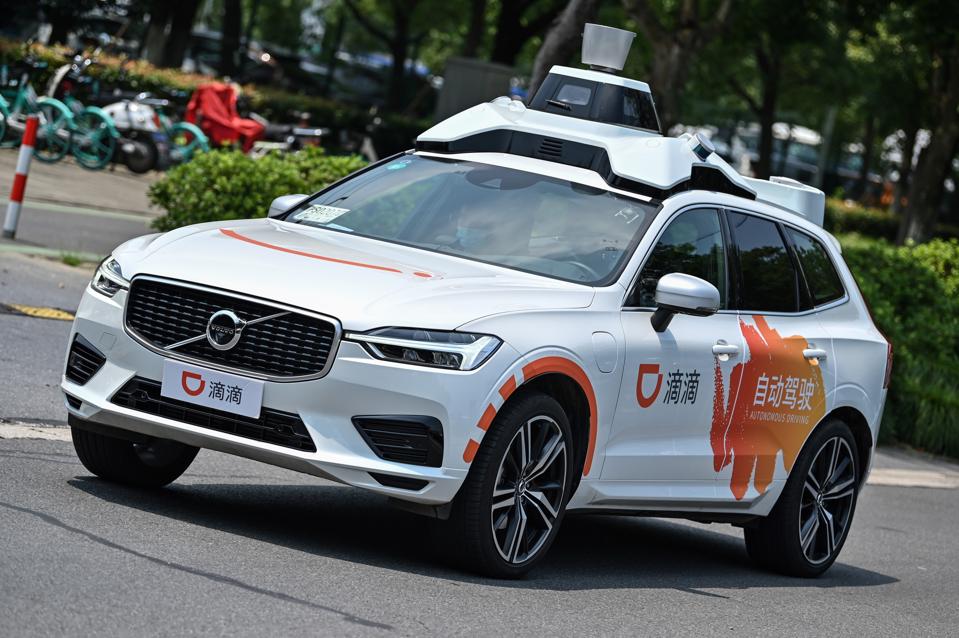 This photo taken on July 22, 2020 shows a Didi Chuxing autonomous taxi during a pilot test drive on ... [+] the streets in Shanghai. - Chinese entrants in the race to put autonomous vehicles on the road are bringing "robotaxis" online in hopes that a hired-car format can be the key to unlocking wide acceptance of the futuristic technology. (Photo by Hector RETAMAL / AFP) / TO GO WITH AFP STORY IT-China-automobile-autonomous-computers,FOCUS by Beiyi Seow and Dan Martin (Photo by HECTOR RETAMAL/AFP via Getty Images)

China reported Monday that exports rose +18.1% year-over-year in May compared to an estimated +19.5%. While the reported figure missed a sky-high estimate, export growth may accelerate in the months ahead as the global economy continues to come back online. China’s Producer Price Index (PPI) for May was also released this week, indicating an average increase of +9% year-over-year in the prices that factories and other producers pay for their inputs. The strong increase reflects surging commodity prices that, in China’s case, have largely not been passed down to the consumer, considering the May CPI’s lackluster +1.3% increase. Missfresh, an online grocery delivery company based in China, filed for a US listing on Tuesday. The company is the latest to file for a US listing despite the perception of ballooning political headwinds US-listed Chinese companies. The Biden Administration has revoked the ban on China-based apps TikTok and WeChat in favor of a broad national security review of all software applications potentially connected to foreign governments.

Didi filed for a US IPO yesterday. For those not familiar with Didi, it is a ride-hailing app similar to Uber UBER or Lyft though significantly larger financially. Didi generated revenues of $5.99 billion in Q1 2021 versus Uber’s $3.5 billion and revenues of $20.40 billion in 2020 versus Uber’s $11.10 billion. The company made a profit in Q1 2021 for the first time, though it was driven by an investment gain. Having met with Didi back in 2019, I came away very impressed with the company.

Investors will be intrigued by the company’s directors as they include Martin Lau, the president of Tencent, Kentaro Matsui of Softbank, Daniel Zhang, who is also the Chairman of Alibaba, and Adrian Perica of Apple AAPL . I suspect Apple’s electric vehicle efforts are farther along than the company has let on based on both chatter that Apple is collaborating with BYD and CATL and its association with Didi. Didi might be the only company globally that boasts both Tencent and Alibaba as shareholders. The two rivals tend to avoid one another.

The company’s filing articulates the opportunity set for the company. 70% of China’s population is projected to be living in cities by 2030. Furthermore, the high cost of car ownership in China is another factor driving current usage. Below are a few stats from the company’s filing:

The company’s filing begs the question of why would they list in the US?

1) Hong Kong’s market is large, but it is nowhere near the size of the US market. For instance, the value of trading in Alibaba’s US share class is $3.8 billion versus Alibaba’s Hong Kong listing’s $733 million.

2) Virtually none of our institutional brokers believe delisting driven by the Holding Foreign Companies Accountable Act (HFCA) will occur. There is too much money involved across US stock exchanges, investment bankers, lawyers, accountants, etc.

3) US private equity firms probably prefer a US listing, which allows them to exit their positions with ease. The other factor is the valuation premium that US tech shares command versus other global markets.

FTSE Russell’s pro-forma for its semi-annual index review was released last night, which appears to include a large inflow for Chinese stocks in Hong Kong.

Electric bus maker BYD did well, once again, as the CEO was interviewed at the Yabuli China Entrepreneur Forum, where he made some very confidant statements about the company’s outlook while taking a shot at Huawei’s electric vehicle (EV) efforts. The EV space was a top performer driven by the BYD comments along with May auto sales gaining +3.1% year over year. EV battery maker CATL is on fire as China EV sales grow along with chatter of Apple entering the space.

Liquor stocks were weak today as foreign investors sold Kweichow Moutai. Sell volume in the stock outpaced buy volume by 3 to 1. Yesterday’s news about a higher alcohol tax may have spooked foreigners.

MSCI MSCI released their Global Market Accessibility Review. Although it was not announced in this latest round of index review, whether South Korea will continue to be classified as an emerging markets country could be announced on June 24th. There was also no announcement regarding China A-share inclusion For the further inclusion of China A-shares to go forward, the foreign ownership limit of 30% is apt to be problematic. For South Korea to be upgraded to developed from emerging markets, the lack of an offshore currency forward and the implementation of a short-selling ban last year will be problematic.

Monday is a market holiday in both Hong Kong and Mainland China.

Krane Funds Advisors, LLC is the investment manager for KraneShares ETFs. Our suite of China focused ETFs provide investors with solutions to capture China’s importance as an essential element of a well-designed investment portfolio. We strive to provide innovative, first to market strategies that have been developed based on our strong partnerships and our deep knowledge of investing. We help investors stay up to date on global market trends and aim to provide meaningful diversification. Krane Funds Advisors, LLC is majority owned by China International Capital Corporation (CICC).