The scenic vistas of this landscape art and the legacy of its creator, Harvey Fite, are being challenged by a persistent feud and a big fence. 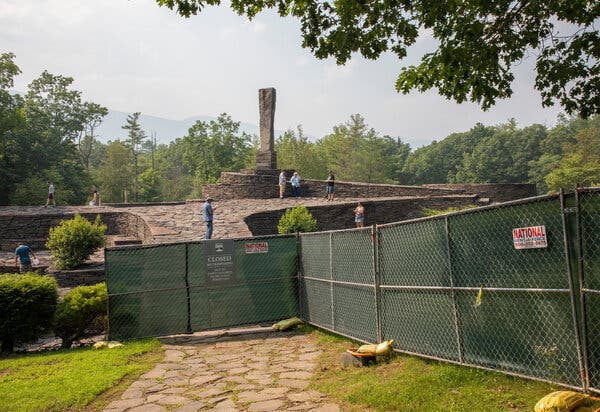 Since May, a chain link fence has surrounded a portion of the massive work of landscape art known as Opus 40 in upstate New York.Credit...Andrew Moore for The New York Times

SAUGERTIES, N.Y. — The 6.5-acre bluestone labyrinth rising out of a quarry here is one of the marvels of the Hudson Valley, an artistic tour de force by a self-taught sculptor who spent more than half his life creating it with thousands of rocks, infinite patience and no cement.

Opus 40, whose very name evokes the tenacity of its creator, Harvey Fite, is a monument to the upper bounds of hard work and dedication that took most of 37 years to build.

But now, some say, this soul-soaring triumph has been tarnished by the ordinary: A chain-link fence, nearly 400 feet long, that wraps around one of its edges, spoils its beauty and is the product of a long smoldering dispute.

The sinewy shapes and elevated platforms of Opus 40 were created without the use of mortar or cement. Credit...via Opus 40

The participants in the dispute include the Fite family, the nonprofit that operates Opus 40 and the neighbors who surround it. While the spat is full of unsubstantiated theories and unsolicited recriminations, it boils down to a fight about the house Fite built that adjoins his masterful creation.

The house is still owned by Tad Richards, Fite’s 81-year-old stepson, and his wife, Pat, and is operated by their 20-year-old grandson who has rented it out online, allowed guests to camp nearby and used it as a site for gatherings.

The neighbors have complained about the events and about the Airbnb guests who they say make noise until the wee hours of the morning. The small nonprofit organization that runs the site thinks those activities pose a safety hazard and a legal liability.

Enter the fence, in May, which the nonprofit erected to separate Fite’s genius, which they own, from Fite’s house, which they don’t.

“The fence is way over the top — tasteless,” said Gerald Pallor, 73, of Saugerties, a longtime friend of the Richards family. “Certainly there is a better way to solve disputes than to put something like that up.”

Visitors atop the precisely placed stones that Harvey Fite used to create Opus 40, a collection of steps, ramps and passageways that resembles an ancient ruin.Credit...Andrew Moore for The New York Times

Jonathan Becker, the president of Opus 40 Inc.’s board of directors, said “safety is an absolute — it’s nonnegotiable” and that the fence, however unsightly, is necessary until a broader solution can be forged.

“Harvey Fite spent nearly 40 years building this sculpture, and this temporary fence will be less than a blip in that history,” Becker said.

It is hard to imagine how Fite, who worked in the quiet of his quarry’s recesses to build something that has been compared to a North American Stonehenge, would react to the clamor that now surrounds it.

Angry neighbors have filed a noise petition and complained repeatedly at town board meetings about activities at the house. Family members have assembled a document trove labeled “Opusgate” to chronicle what they view as their mistreatment at the hands of various parties. Their supporters have formed a Facebook group and started a change.org petition that calls for the removal of the fence.

In one recent flare-up, Steven Dunning, a neighbor, called the police just after 3 a.m. to report loud music and a party at the Fite House, according to police records. Roughly 12 hours later the Richards’ grandson, Arick Manocha, called the police to report Dunning — whose wife works at Opus 40 — for trespassing on the property and for yelling at the person staying at the house.

“I’m at the end of my rope,” Dunning, told officials at a recent town meeting.

Fite taught sculpture at nearby Bard College and in his spare time, single-handedly, crushed the bluestone that is the fabric of his masterwork. Credit...via Opus 40

The quarry that became the site of Opus 40 was purchased by Fite in 1938 when he was a teacher at nearby Bard College. He finished building the house there a year later at a time when Fite, a drama instructor at first, had already switched over to teach sculpture.

After a trip to Honduras in 1939 to help restore Mayan ruins, Fite began teaching himself how to finely fit stones together without mortar or cement. Each summer, free from his teaching responsibilities, he worked on his sprawling rock formation. In 1963, Fite added one of the finishing touches: A nine-ton boulder he would use as the centerpiece, a 15-foot monolith that shot triumphantly into the air. Opus 40, as some have noted, had been capped off with an exclamation point.

Fite died while still working on Opus 40 in 1976. (While riding a power lawn mower, he fell into the quarry from a precipice on the property, according to his obituary printed in The New York Times.) He had said it would take him 40 years to complete the project and when he died at age 72, some 37 years in, it had been fully outfitted with ramps, stairways, pools, moats and subterranean passageways, all fashioned from hand carved stone that was placed with remarkable precision.

“He left some unfinished areas; but Opus 40 is as complete as it would ever have been,” Tad Richards wrote in the book, “Opus 40: The First 20 Years.” “It was the product of Fite’s ceaseless vision, and could only have been stopped by his death.”

Barbara Fite, the artist's wife, would go on to create the nonprofit Opus 40, Inc. to tend to his masterwork and would run it until a year before her death in 1987. Her son, Tad, lived in the house on the property and led the nonprofit for years after his mother’s passing.

Fite’s former home is adjacent to the work. The house is now part of the dispute between Fite’s family and the nonprofit that operates the site.Credit...Andrew Moore for The New York Times

He relinquished control to the organization in 2018 after he said Alan Siegel, the former head of the Thompson Family Foundation, expressed interest in helping to finance the nonprofit and to help buy the Fite House in order to unify it with the sculpture site, which was now separately owned by the nonprofit. (A Richards-led organization could not buy the Fite House from themselves, without running afoul of regulations on nonprofits.)

Siegel pushed the organization to evolve from a family-run enterprise to a professionalized nonprofit and so a new independent board was installed. But in March 2019, Siegel unexpectedly died before the house had been purchased. Without Siegel at the helm, the foundation he had led said it could no longer lead the fund-raising efforts.

The list of grievances on the part of all parties has continued to grow. Nonprofit officials say that when they took over the organization they were saddled with cleaning up the messy bookkeeping the family left in its wake. Later, they noticed, they said that items like wooden benches, sculptures and quarrying tools were missing from Opus 40, and in a letter, the nonprofit accused the Richardses and their grandson of taking them and selling them to a local antique shop. The nonprofit then changed the locks on the doors of the quarryman’s museum.

The museum at Opus 40, with artifacts from the site’s prior life as a quarry. It is now operated by the nonprofit.Credit...Andrew Moore for The New York Times

The Richardses said they had been struggling financially and only sold items that belonged to them. They have complained that the nonprofit does not properly care for the grounds and had, as Tad Richards put it, let the hedges “go wild.”

Now there is a lawsuit that has further complicated matters, one filed by a local businessman who once had a deal to buy the house jointly with the Richards grandson for $580,000, according to court documents. As part of the deal, the businessman, David Hanzl, bought a house in nearby Kingston for the Richardses to live in, according to the court papers, and Hanzl and Manocha were supposed to run the Fite House together as a short-term rental property.

But the sale of the Fite House never went through. The civil suit accuses the Richardses and their grandson of having “roped” Hanzl into a reckless scheme to financially rescue the family and says the Richardses are now living rent free in the Kingston house Hanzl bought them.

Tad Richards, in an interview, said he had been left “high and dry” when Hanzl backed out of buying the Fite House.

Manocha said it has always been his grandparents intention to “resolve these issues” and purchase the Kingston house after the Fite House is sold.

In May, the situation began to escalate when the nonprofit announced officially in a letter to the Richardses that the organization was severing ties with the house after years of paying to use the family’s driveway as part of an entrance to the park and occasionally working with family on various programs. It also said it would work to create a new entrance to the sculpture and was putting up a fence.

The nonprofit has said there must be an “appropriate and binding safety, programming and management plan for Fite House in place,” before the fence comes down. Becker, the nonprofit’s board president, sent an email to Tad Richards in July outlining several more specific “common-sense ideas for an agreement framework” such as bans on camping, loud noise after 10 p.m. and events of more than 12 people. He insisted that if interested parties used a fraction of the time they have spent posting on social media on the work of putting together a safety plan, an agreement could be reached “in an afternoon.”

One solution would be for the nonprofit to buy the house, an idea that has floated around for years but one that would entail raising the money for a down payment. Officials of the organization say they would like that. Manocha said that because the nonprofit has “made it impossible” to turn the property into a business, “our mind has shifted to selling.”

The proximity of the house to Opus 40 is evident in this view of the fence from Fite’s studio in the Fite House.Credit...Andrew Moore for The New York Times

Becker said in late July that he plans to soon meet with Tad Richards to once again negotiate a possible deal. And on Friday, representatives of Opus 40, the Richards family and the town met to review the framework for an agreement laid out by Becker.

Everyone agrees the sculpture itself is sorely in need of repairs and that, if they can iron out their differences, the focus can return to preserving Harvey Fite’s artistic masterpiece and personal legacy.

On a recent afternoon, Tad Richards allowed himself a moment of optimism and reflection as he stood next to the house he grew up in and peered out at a work of art that has helped to define his life. “It means more than I can say,” he said.