The Portuguese artist and psychoanalyst examines postcolonial trauma in her U.S. debut in Brooklyn. The stakes are universal, she says. 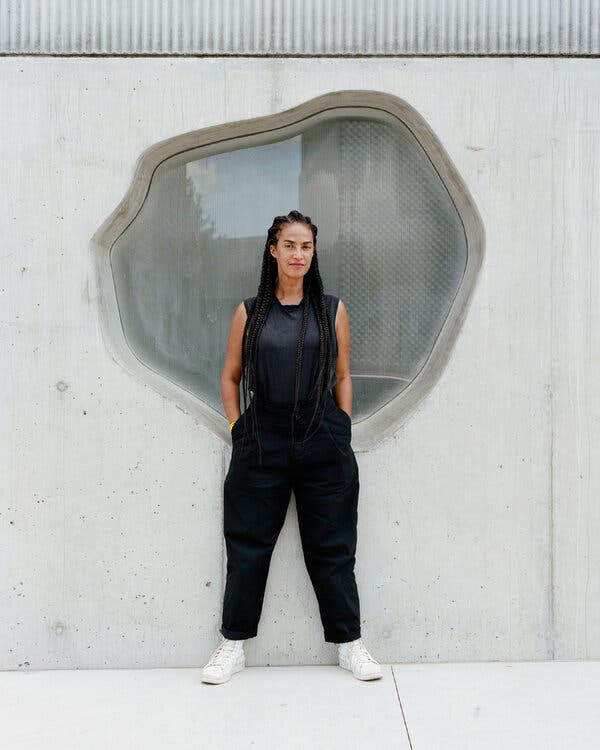 Grada Kilomba, the Portuguese artist, writer and psychoanalyst, at the Amant Foundation in Brooklyn, which is presenting her U.S. exhibition debut. Credit...Jasmine Clarke for The New York Times

Grada Kilomba is discreet when it comes to describing her past work counseling war victims. “It was a long time ago,” the Portuguese artist and writer, who trained in clinical psychology and psychoanalysis, told me on a recent visit to New York.

At a hospital in Lisbon, and later in Berlin, where she moved in the mid-2000s, Kilomba would meet refugees from various countries experiencing fresh trauma. “People were arriving directly from war situations,” she said. She worked in particular with women and children.

What stayed with her were the stories — and how they were told. “Above all I was fascinated by the stories I was listening to, and by the images that were appearing to deal with them, to stage them,” she said. “And this is what appears also in my work.”

Kilomba, 53, is now a noted visual artist whose work blurs disciplinary lines, involving art and ritual; film, sculpture and performance; Greek mythology, Black studies and feminism. “I don’t want to imprison myself in a format,” she said. “Each story wants to be told in a certain way.”

It has been shown in the São Paulo Biennale in 2016, Documenta in 2017 and the Berlin Biennale in 2018. And this season she has major projects on both sides of The Atlantic: her first large-scale public installation, in Lisbon, and her first United States exhibition, at the Amant Foundation in Brooklyn, through Oct. 30.

Storytelling, as both imperative and method for healing, is the thread that runs through her art and connects it to her past clinical practice; her years teaching psychoanalysis and postcolonial studies; her writing, notably “Plantation Memories: Episodes of Everyday Racism” (2008), drawing on interviews of Black European women; and her personal journey to understand her roots and subjectivity.

“Grada’s practice as an artist emerged fully formed, nourished by other practices,” said Omar Berrada, the writer and curator, who has hosted her talks in Marrakesh and at the Cooper Union. “She came to the contemporary art world with a world.”

Kilomba is a distinctive figure, with a signature style of thick cornrows that extend into long braids, and speaks at once softly and precisely. She offered me a walk-through of her exhibition at Amant, a serene venue that opened this year, accompanied by Ruth Estévez, its artistic director, who curated the show.

One work, “The Desire Project,” is a text piece, projected on three walls of a darkened room, in which Kilomba expresses how writing brings liberation: “I write, almost as an obligation, to find myself … I am the authority of my own history.” At the room’s entrance is a shrine to Escrava Anastacia, the Brazilian folk icon presented as an enslaved woman who has been forced to wear an iron mask that prevents her from speaking. This passage — from objectification and enforced silence to full agency — is a core drive in Kilomba’s work, Estévez observed. “By becoming the subject, she makes herself free to write and create in the way that she needs.”

An installation, “Table of Goods,” consists of a hillock of soil, ringed by candles and studded with sugar, coffee and chocolate. The pursuit of these luxuries, Kilomba noted, brought catastrophe: plantations, monoculture, enslavement. “The pleasures of the West and the horrors of the rest,” she said. “I wanted to materialize that in a work.”

“Table of Goods,” a 2017 installation made of soil ringed by candles and studded with sugar, coffee and chocolate — luxury goods at the center of the Atlantic plantation economy. “The pleasures of the West and the horrors of the rest,” Kilomba says.Credit...Jasmine Clarke for The New York Times

The showstopper is “A World of Illusions,” three performance films shown in a triangle, in which Kilomba tells the myths of Narcissus, Oedipus, and Antigone, building to pointed reinterpretations. In each, actors play the tale silently against a blank background, with musical interludes, while Kilomba, on a smaller screen, narrates — in the manner, she said, of a West African griot.

Narcissus, she proposes, can tell us something about the self-regard of whiteness. Oedipus speaks to the role of cyclical violence in maintaining the state. And Antigone — in Kilomba’s staging women play every role — conveys the need to remember. “These women are retelling the past,” she said, “but producing the memory to be in the present, and to design the future.”

Kilomba’s work points out how trauma and erasure are wounds that sap society.

A still from the performance on video “Illusions Vol. I, Narcissus and Echo” (2017). The story of Narcissus, Kilomba said, can tell us something about race, and specifically about the self-regard of whiteness.Credit...Grada Kilomba

A still from “Illusions Vol. II, Oedipus” (2018). Each part of the trilogy features actors performing silently against a white background, with musical interludes, while Kilomba narrates — in the manner, she said, of a West African griot.Credit...Grada Kilomba

When she was born, in 1968, Portugal was fighting wars against liberation movements in Angola, Mozambique, Guinea-Bissau and Cape Verde, only withdrawing after a 1974 coup in Lisbon ushered in the Carnation Revolution, and, a year later, independence for the former colonies. But for African families already living in Portugal, like hers, laws still enforced the use of standard Portuguese, rather than African, names.

Kilomba is a reclaimed family name that she learned from her grandmother; it is not the name in her passport. On her first trip to Africa in 1999, to the islands of São Tome e Principe, she visited plantation sites, seeking documentary traces of her ancestors.

Raised in the immigrant outskirts of Lisbon, Kilomba found in psychology and psychoanalysis both her career start and methods for self-understanding. But she found Portugal limiting: “I wanted to do a lot of things and all of them were forbidden,” she said. “I was the only Black student in my university department. You’re in constant isolation.”

She earned a grant to complete her doctorate in Berlin, and stayed; the city has been her home since 2008. It drew her, she said, for its role as a site of Black thinking in Europe, from W.E.B. Du Bois’s time there in 1892-94 to Audre Lorde’s a near-century later.

As a visual artist Kilomba works across mediums including film, performance, sculpture and photography. “I don’t want to imprison myself in a format,” she said. “Each story wants to be told in a certain way.”Credit...Jasmine Clarke for The New York Times

Germany’s reckoning with its Nazi past was another appeal. “If other countries are in a state of denial and repression, Germany is in a state of guilt and shame,” she said. “It’s a starting point — you can ask questions, experiment, work with difficult topics.”

Kilomba’s psychoanalytic outlook places her in a lineage of thinkers — notably Frantz Fanon — who have drawn on this ostensibly Western field to understand the aftereffects of colonial domination. But in her case, it has led her to find fulfillment in visual art.

“I see art like an iceberg,” she said, “where you are used to seeing everything that is on the top, but I pull the audience into the unconscious world, and interrupt the collective imaginary. This is what I love doing.”

Kilomba’s work is resonating. Her 2019 exhibition at the Pinacoteca de São Paulo was a sensation, with people queuing all day for the opening. “There’s a seduction about it,” Valéria Piccoli, the Pinacoteca’s chief curator, said of Kilomba’s art. “Her thinking is really sophisticated but when it comes out in the work the message is clear.”

In Lisbon this fall, Kilomba has installed 140 slabs of burned wood outside the Museum of Art, Architecture and Technology. They form the pattern associated with images of the holds of slave ships and their cargo. The waterfront site is highly charged: Nearby is a massive “Monument to the Discoverers” who built the Portuguese empire, their ships often launching from these very docks.

More than a counter-monument, Kilomba’s “O Barco” (“The Boat”) is an act of healing. The public can walk amid the blocks, some of which are inscribed with lines of poetry in European and African languages. The performers who have joined Kilomba in dance and song at the installation are nonprofessionals from Lisbon’s Black community.

A performance activation of “O Barco” (“The Boat”), on the Lisbon waterfront, where Portuguese colonists  set sail. The slabs of burned wood form the pattern of diagrams of slave ships. “I’m concerned with the repetition of barbarity,” the artist said. “That’s why it’s so important to tell the stories anew.” Credit...Bruno Simão

The project is quietly radical in Portugal where “addressing racial issues from the perspective of the racialized is still not so common,” said the musician Kalaf Epalanga, who composed the score. Only recently, said Beatrice Leanza, the executive director of MAAT, have “these topics gained the urgency that they deserve.”

For Kilomba, the need goes beyond activism to a deeper catharsis: “How can you live in a city where you don’t have symbols and metaphors to elaborate trauma?” The stakes are universal, given the global rise of violent ideologies. “I’m concerned with the repetition of barbarity,” she said. “That’s why it’s so important to tell the stories anew.”