Grant Shapps to return early from Spain after rule change 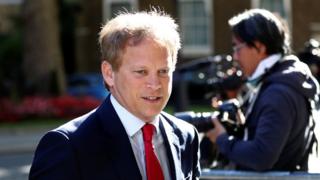 The transport secretary is leaving a family holiday in Spain early to return to the UK, after quarantine restrictions came into force.

Grant Shapps said he would come home on Wednesday so he can "get through quarantine" as quickly as possible and return to work.

He added he wanted to help the government "handle the situation".

He flew out on Saturday morning aware that the 14-day quarantine rule could be imposed on Sunday.

It's understood Mr Shapps had originally decided to press ahead with his holiday and then quarantine on his return to the UK, to avoid a possible public backlash.

In a statement, he added: "I've been in constant contact with officials and industry representatives since I arrived in Spain on Saturday afternoon.

"However, I think it's right to get back to work in the UK as soon as possible in order to help handle the situation."

Earlier, Cabinet Office Minister Michael Gove said he had decided to cancel a planned holiday to the Balearic Islands after the rule change.

"I know there will be other people who'll be much worse affected than me, and I do strongly sympathise with the situation in which they find themselves," Mr Gove said.

"But we all recognise that public health comes first," he added.

"Whilst self-isolation for 14 days can be difficult, everyone will want to do the right thing."

Quarantine measures apply to all those returning from mainland Spain, the Canary Islands and the Balearic Islands, such as Majorca and Ibiza.

It is not known where Mr Shapps is staying.

Ministers discussed the rising infection rate in parts of Spain on Friday night.

Once in Spain, Mr Shapps took part in a meeting with other UK ministers at which it was agreed to impose the restrictions.

The requirement came into force on Sunday.

More than 900 cases of coronavirus were reported in Spain on Friday, and the country's officials are warning of fears of a second spike.

Another Tory MP, Minister for London Paul Scully, has been affected by the changes.

The Department for Business, Energy and Industrial Strategy confirmed Mr Scully was in Lanzarote and would be isolating on his return to the UK.