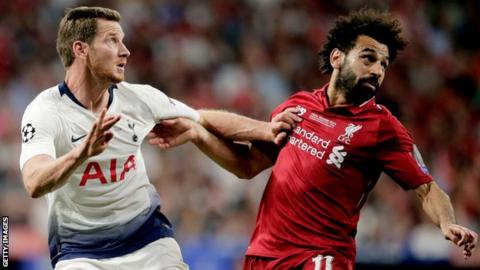 Vertonghen, 33, made 315 appearances for Tottenham, but leaves after seeing his playing time limited under new manager Jose Mourinho this season.

The Belgian, who departs as a free agent, helped Spurs reach finals in the Champions League and League Cup.

"So my time at the club comes to an end, a sad day for many reasons," Vertonghen wrote in a post on Instagram.

"I will miss the friends I've made here, the staff that make the club run, playing at the amazing new stadium and of course you fans," he added.

"Thank you for all the support over the years. You've been amazing. We had many unbelievable memories but for now, it's goodbye."

Vertonghen, who joined Tottenham from Ajax in 2012, did not feature in his side's last Premier League game of the season, a 1-1 draw with Crystal Palace.

His team-mate, England striker Harry Kane, was among those to pay tribute to Vertonghen and goalkeeper Michel Vorm, who is also leaving.

"It's been a pleasure sharing a dressing room with them," Kane said in a caption, alongside a squad picture.