‘Letters of Suresh’ Review: Returning to the Fold

Rajiv Joseph’s new drama revisits the protagonist, and the metaphoric possibilities of origami, of his earlier play “Animals Out of Paper.” 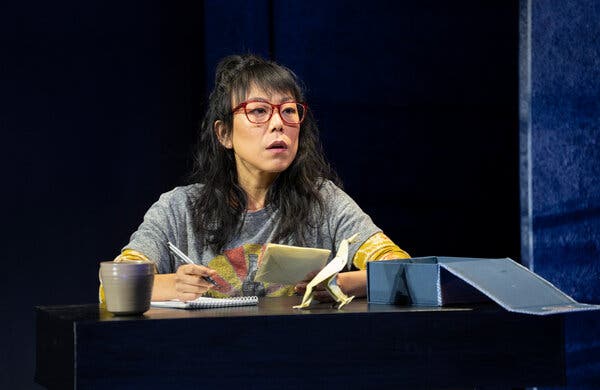 We live in the age of the reboot: an era of reimaginings, spinoffs and sequels upon sequels upon sequels. Theater, with its dependence on adaptation and revival, got there first. But this impulse now extends to new plays, too — “A Doll’s House, Part 2,” Zoom installments of the Apple Family Plays, the way that “Pass Over” riffs on “Waiting for Godot.”

So it’s surprising, yet not surprising at all, to sit down at Rajiv Joseph’s “Letters of Suresh,” which opened Tuesday night at Second Stage Theater, and discover a follow-up to “Animals Out of Paper,” his petite and practically perfect dramedy from 2008.

A three-character play originally produced as part of Second Stage’s uptown series, “Animals Out of Paper” traced the relationships among Suresh, a teenage origami prodigy who is mentored by Andy, his calculus teacher, and Ilana, the professional origamist that both men fall for. It ended in an unresolved fashion. Joseph (“Guards at the Taj,” “Bengal Tiger at the Baghdad Zoo”), a playwright who specializes in putting big ideas into small and sparsely populated spaces, isn’t big on resolution. Yet “Animals” had seemed complete enough. I have rarely wondered how Suresh’s life — forgive me, I can’t resist — unfolded. Joseph must have felt differently.

Directed by May Adrales, “Letters of Suresh” is, as the title suggests, an epistolary play, with a script composed entirely of letters. Well, letters and one FaceTime conversation. It opens with a letter from Melody (Ali Ahn, frenetic and endearing), a 40-year-old writing teacher. Melody has inherited the worldly effects of her great-uncle, Father Hashimoto: a Bible, an origami bird, a box of letters from Suresh. She writes to him, asking if he wants them returned, narrating the text as she scribbles. Despite receiving no response, she keeps writing and narrating, marveling at the way she can reveal herself to a blank page.

If narrating letters to nowhere seems like a writerly conceit, that’s because it is, though Ahn’s messy charisma puts it over. She soon disappears, replaced — within the set designer Mikiko Suzuki MacAdams’s false prosceniums — by Ramiz Monsef’s Suresh. He narrates the letters in the box, which take him from a confused boy of 18 to an equally confused man of about 30. Utkarsh Ambudkar created the role of Suresh in the earlier play, which means Monsef has some big high-tops to fill. Cocky, appealing and forlorn, he fits them just fine.

There are two other roles, Father Hashimoto (Thom Sesma), and Amelia, a onetime colleague of Suresh’s, played by Kellie Overbey — who originated the role of Ilana, which makes her appearance in this different guise a little confusing. “Letters of Suresh,” sweet and even soppy, finds its characters in various stages of heartbreak, with no fracture fully healed. Mixing originality and cliché, the play surveys the near impossibility of connection, a theme reflected in its structure, in which everyone, more or less alone onstage, speaks their truths into a void. It offers up its metaphors — that paper bird, the heart of a whale — with a hand as heavy as an anvil. “Letters and origami,” Amelia muses. “These ancient, archaic art forms of folding paper into something else.”

Adrales keeps the pacing sprightly, and the actors mostly resist the pull of sentiment. (Shawn Duan’s projections, which have the screen saver quality of most projections, don’t exactly help.) A play, though, is also a way of making paper (a script) into something else (a show), and “Letters of Suresh,” despite its adroit, layered performances, never executes that transformation fully, persisting as a literary work rather than an entirely theatrical one.

Joseph wrote the play before the pandemic, which seems prescient. With everyone homebound and exhausted by Zoom, letter writing experienced a brief vogue. But we can see each other in person now. And as of late summer, we can see live theater, too. “Letters of Suresh,” though, mostly withholds the pleasures of dialogue and interaction. It gives us paragraphs, signed sincerely and very truly, instead.