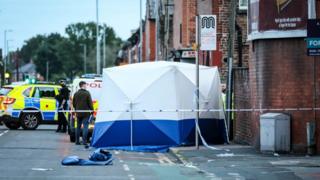 A 17-year-old has been stabbed to death and four other boys were injured as two groups clashed in Manchester.

Police were called to a disturbance in Henbury Street, Moss Side, at about 19:30 BST on Sunday. The boy was pronounced dead at the scene.

Two 15-year-olds and a 17-year old were also hurt, as well as a 16-year old who is in hospital with "potentially life-changing injuries."

A 17-year-old boy arrested at the scene remains in custody, police said.

He is being held on suspicion of murder and the injured boys are also in custody awaiting questioning in connection with the killing, Greater Manchester Police (GMP) said.

Supt Mark Dexter said: "No parent should ever have to bury their child and my heart goes out to the mother and father who lost their son yesterday evening."

He added: "Despite us having made four arrests, we are still actively piecing together the circumstances around this incident and I would urge anyone who has any information to please get in touch with us as a matter of absolute urgency.

"Violence of this kind is unacceptable and it is difficult to digest that another young life has been lost.

"We and the community have been working so hard to reduce knife crime, we obviously all need to do more and we will."