One of the biggest galaxies in the universe seems to lack its dark centerpiece. 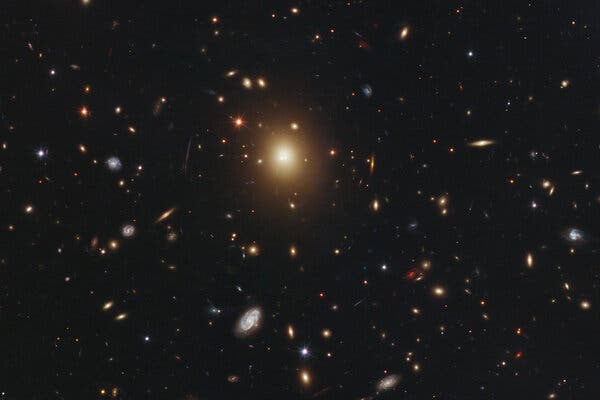 The galaxy cluster Abell 2261, captured by the Hubble Space Telescope. The brightest galaxy, center left, is about one million light-years across and about 10 times the diameter of the Milky Way.Credit...NASA, ESA, M. Postman (STScI), T. Lauer (NOAO), and the CLASH team

Astronomers are searching the cosmic lost-and-found for one of the biggest, baddest black holes thought to exist. So far they haven’t found it.

In the past few decades, it has become part of astronomical lore, if not quite a law, that at the center of every luminous city of light, called a galaxy, lurks something like a hungry Beelzebub, a giant black hole into which the equivalent of millions or even billions of suns have disappeared. The bigger the galaxy, the more massive the black hole at its center.

So it was a surprise a decade ago when Marc Postman, of the Space Telescope Science Institute, using the Hubble Space Telescope to survey clusters of galaxies, found a supergiant galaxy with no sign of a black hole in its center. Normally, the galaxy’s core would have a kink of extra light in its center, a kind of sparkling cloak, produced by stars that had been gathered there by the gravity of a giant black hole.

On the contrary, at the exact center of the galaxy’s wide core, where a slight bump in starlight should have been, there was a slight dip. Moreover, the entire core, a cloud of stars some 20,000 light years across, was not even centered on the exact middle of the galaxy.

“Oh, my God, this is really unusual,” Tod Lauer, an expert on galactic nuclei at the National Optical-Infrared Astronomy Research Laboratory in Tucson, Ariz., and an author on the paper, recalled saying when Dr. Postman showed him the finding.

That was in 2012. In the years since, the two researchers and their colleagues have been ransacking the galaxy, looking for X-rays or radio waves from the missing black hole.

The galaxy is the brightest one in a cluster known as Abell 2261. It is about 2.7 billion light-years from here, in the constellation Hercules in the northern sky, not far from the prominent star Vega. Using the standard rule of thumb, the black hole missing from the center of the 2261 galaxy should be 10 billion solar masses or more, comparable to the mightiest of these monsters known to astronomers. The black hole at the center of the Milky Way galaxy is only about four million solar masses.

So where has nature stashed the equivalent of 10 billion suns?

‘A pit in every peach’

Proving the latter could provide insight into some of the most violent and dynamic processes in the evolution of galaxies and the cosmos, about which astronomers have theorized but never seen — a dance of titanic forces and swirling worlds that can fling stars and planets across the void.

“It’s an intriguing mystery, and we’re on the case,” Dr. Postman said in an email. He added that the upcoming James Webb Space Telescope would have the capability to shed light, so to speak, on the case.

“What happens when you eject a supermassive black hole from a galaxy?” Dr. Lauer asked.

Dr. Lauer is part of an informal group who call themselves Nukers. The group, whose membership is fluid — “like a band,” he said — first came together under Sandra Faber of the University of California, Santa Cruz, in the early days of the Hubble Space Telescope. Over the past four decades, they have sought to elucidate the nature of galactic nuclei, using the sharp eye of Hubble and other new facilities to peer into the intimate hearts of distant galaxies.

“The story of A2261-BCG,” he said, referring to the galaxy’s formal name in literature, “is what happens with the most massive galaxies in the universe, the giant elliptical galaxies, at the end point of galaxy evolution.” 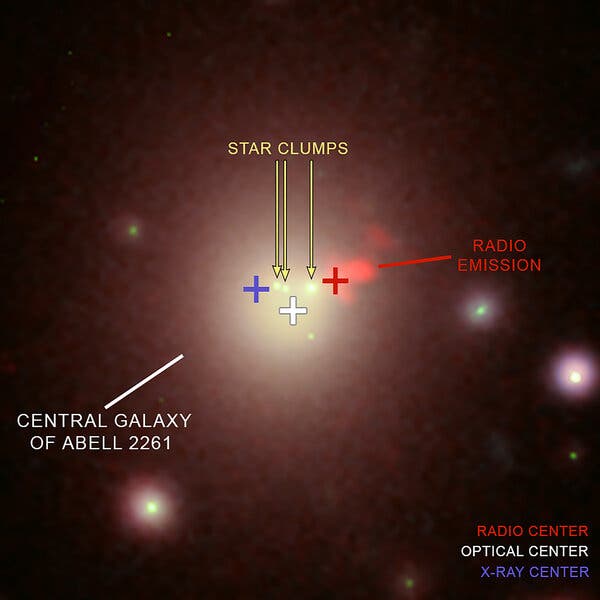 Black holes are objects so dense that not even light can escape their gravitational clutches. They are invisible by definition, but the ruckus — X-rays and radio screams — caused by material falling into its grasp can be seen across the universe. The discovery in the 1960s of quasars in the centers of galaxies first led astronomers to consider that supermassive black holes were responsible for such fireworks.

By the turn of the century, astronomers had come to the conclusion that every galaxy harbored a supermassive black hole, millions to billions of times more massive than the sun, in its bosom. Where they came from — whether they grew from smaller black holes that had formed from the collapse of stars, or formed through some other process early in the universe — nobody is sure. “There is a pit in every peach,” Dr. Lauer said.

But how do these entities affect their surroundings?

In 1980, three astronomers, Mitchell Begelman, Martin Rees and Roger Blandford, wrote about how these black holes would alter the evolution of the galaxies they inhabit. When two galaxies collided and merged — an especially common event in the earlier universe — their central black holes would meet and form a binary system, two black holes circling each other.

Dr. Begelman and his colleagues argued that these two massive black holes, swinging around, would interact with the sea of stars they were immersed in. Every once in a while, one of these stars would have a close encounter with the binary, and gravitational forces would push the star out of the center, leaving the black holes even more tightly bound.

Over time, more and more stars would be tossed away from the center. Gradually, starlight that was once concentrated at the center would spread out into a broader, diffuse core, with a little kink at the center where the black-hole binary was doing its mating dance. The process is called “scouring.”

“They were way ahead of the game,” Dr. Lauer said of the three astronomers.

A scoured core was the kind of situation that Dr. Lauer and Dr. Postman thought they had encountered with Abell 2261. But instead of a peak at the center of the core, there was a dip, as if the supermassive black hole and its attendant stars had simply been taken away.

This raised the even more dramatic possibility that the scenario envisioned by Dr. Begelman and his colleagues had played out all the way to the end: The two black holes had merged into one gigantic mouthful of nothing. The merger would have been accompanied by a cataclysmic burst of gravitational waves, space-time ripples predicted to exist by Einstein in 1916 and finally seen by the LIGO instruments a century later, in 2016.

If that burst was lopsided, it would have sent the resultant supermassive black hole flying through the galaxy, or even out of it, something astronomers had never observed. So finding the errant black hole was of the utmost importance.

Further scrutiny of A2261-BCG revealed four little knots of light within the diffuse core. Could one of them be harboring the black hole?

A team led by Sarah Burke-Spolaor of West Virginia University took to the sky with Hubble and the Very Large Array radio telescope in Socorro, New Mexico. Spectroscopic measurements by the Hubble could tell how fast the stars in the knots were jiggling around, and thus whether some massive object — a black hole — was needed to keep them all together.

Two of the knots, they concluded, were probably small galaxies with small internal motions being cannibalized by the big galaxy. Measurements of the third knot had such large error bars that it could not yet be ruled in or out as the black hole’s location.

The fourth, very compact knot near the bottom edge of the core was too faint even for the Hubble, Dr. Burke-Spolaor reported. “Observing this knot would have required an overblown amount of time (hundreds of hours) observing with Hubble Space Telescope,” she said in an email, and so it also remains a candidate for the black-hole hiding spot.

“We were originally hoping the radio emission would be some kind of literal smoking gun, showing an active jet that points directly back to black-hole location,” she said. But the radio relic was at least 50 million years old, according to its spectral characteristics, which meant, she said, that the large black hole would have had ample time to move elsewhere since the jet turned off.

Next stop was NASA’s orbiting Chandra X-ray Observatory. Kayhan Gultekin of the University of Michigan, another veteran Nuker who was not on the original discovery team, aimed the telescope at the cluster core and those suspicious knots. No dice. The putative black hole would have to be feeding at one-millionth of its potential rate if it were there at all, Dr. Gultekin said.

“Either any black hole at the center is very faint, or it isn’t there,” he wrote in an email. The same goes for the case of a binary black-hole system, he said; it would need to be eating very little gas to stay hidden.

In the meantime, Imran Nasim, of the University of Surrey in the U.K., who was not part of Dr. Postman’s team, has published a detailed analysis of how the merger of two supermassive black holes could reform the galaxy into what the astronomers have found.

“Simply, gravitational wave recoil ‘kicks’ the supermassive black hole out of the galaxy,” Dr. Nasim explained in an email. Having lost its supermassive anchor, the cloud of stars around the black hole binary spreads out, becoming more diffuse. The density of stars in that region — the densest part of the entire giant galaxy — is only one-tenth the density of stars in our own neighborhood of the Milky Way, resulting in a night sky that would appear anemic compared with our own.

All this is another reason that astronomers eagerly await the launch of the James Webb Space Telescope, the long-awaited successor to Hubble, which is now scheduled for the end of October. That telescope will be able to examine all four knots at the same time and determine whether any of them are a cloaked, supermassive black hole. 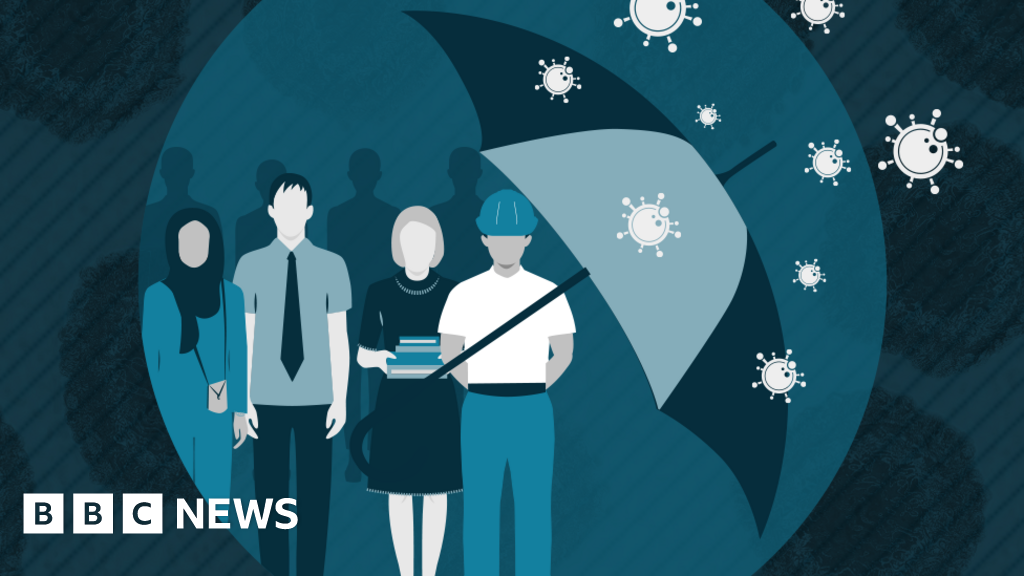 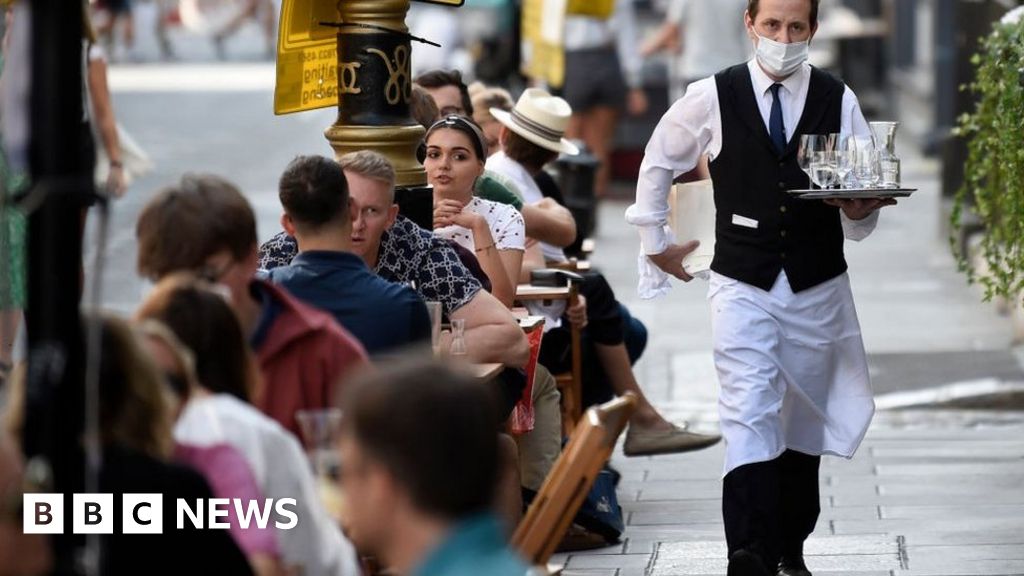 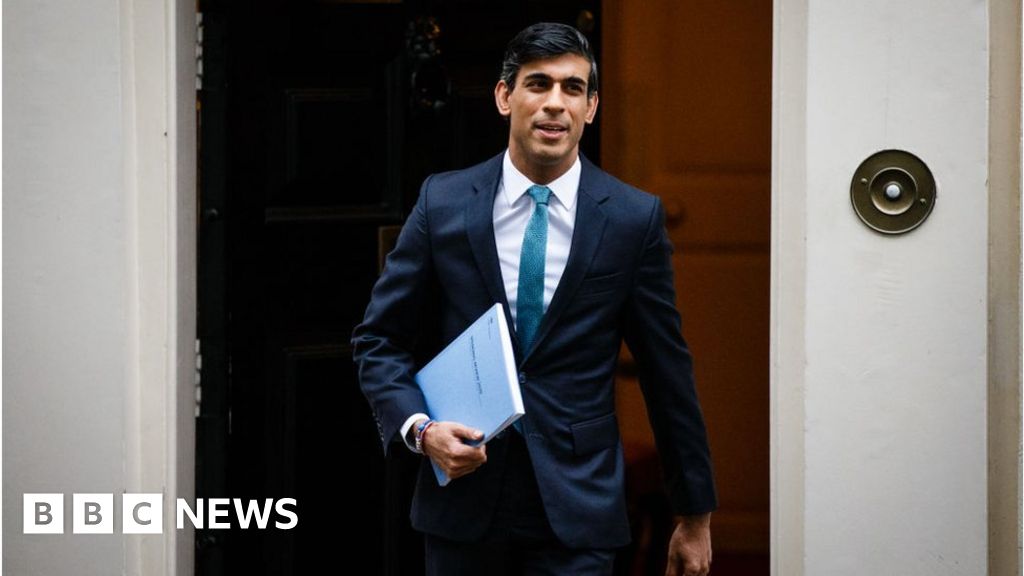 Budget 2021: Five things to look out for from Rishi Sunak