Though 88.5 percent of all N.F.L. players had received at least one vaccine dose through Friday, some players voiced their hesitance to be inoculated. 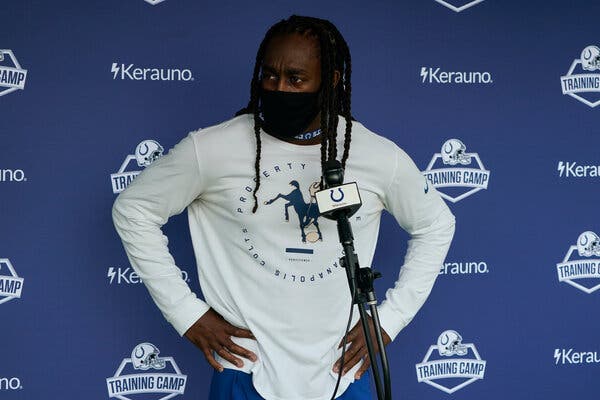 When asked by reporters Tuesday if he had received the vaccine, Colts wide receiver T.Y. Hilton answered, “It’s a personal decision, so let’s just leave it at that.”Credit...Michael Conroy/Associated Press

When asked by reporters Tuesday if he had received the Covid-19 vaccine, Indianapolis Colts defensive lineman DeForest Buckner nodded his head and smiled.

“It’s a personal decision,” Hilton said, “so let’s just leave it at that.”

On Monday, Frank Reich, the Colts’ vaccinated head coach, tested positive in a so-called breakthrough infection. He was asymptomatic, but participated in the start of training camp remotely, Chris Ballard, the team’s general manager, said.

As the first week of N.F.L. training camps concluded amid the backdrop of the Delta variant fueling an alarming spike in coronavirus cases nationally, the dichotomy within the Colts’ locker room reflected the discussion among N.F.L. players regarding the vaccine, even as the league offered more education and levied harsher penalties on the unvaccinated.

As of Friday morning, 88.5 percent of all players had received at least one vaccine dose, according to an N.F.L. spokesman, a more than 8 percent jump from last week. Twenty of the 32 teams have more than 90 percent of their rosters vaccinated, while two teams, the Colts and the Washington Football Team, have vaccination rates below 70 percent.

With training camps open, players can now voice their opinions to the broader public, and their actions are more scrutinized with reporters present. Baltimore Ravens quarterback Lamar Jackson, the 2019 N.F.L. most valuable player, tested positive for the coronavirus this week, his second infection since November. Protocols will require Jackson to miss at least 10 days if he is unvaccinated.

Arizona Cardinals wide receiver DeAndre Hopkins and Tampa Bay Buccaneers running back Leonard Fournette voiced their hesitancy about the vaccine in July on social media in posts they’ve since deleted.

Dallas Cowboys quarterback Dak Prescott declined to reveal his vaccination status to reporters this week, inaccurately claiming that doing so would violate the Health Insurance Portability and Accountability Act, or HIPAA. Buffalo Bills wide receiver Cole Beasley, an outspoken vaccine critic, even crafted an original song regarding his stance.

Despite high-profile examples of players with reservations about the vaccine, the leaguewide vaccination rate exceeds that of the United States, with the Centers for Disease Control and Prevention reporting that nearly 70 percent of adults have received at least one dose.

The N.F.L. in July issued a memo to all 32 teams outlining steep penalties for those who refuse inoculation. If an unvaccinated player or staff member is found to have caused an outbreak that forces a schedule change, the team experiencing the outbreak will be held financially responsible for the other club’s expenses, the memo said. If the game cannot be rescheduled, the team experiencing the outbreak will forfeit.

Unvaccinated players still face several restrictions, including daily testing, capacity limits in weight rooms and a requirement to travel on a separate plane from teammates. The league can also fine them as much as $50,000 for breaking Covid-related protocols. Regardless of the decrees from the N.F.L., individual teams still are encountering some resistance.

In June, Washington Coach Ron Rivera addressed his team’s low vaccination rate by inviting Kizzmekia Corbett, an immunologist who helped develop the Moderna vaccine, to speak with players and address their questions.

Some remained skeptical, including defensive end Montez Sweat, who said he was “not a fan” of the vaccine. Rivera, who is immune-compromised after battling cancer, said he continues to wear a mask around groups of players to protect himself.

The scattered messaging among some of the N.F.L.’s recognizable players may sow further doubt in who that may already be distrustful, said Dr. Sherita Golden, vice president and chief diversity officer at Johns Hopkins Medicine.

“I do think they need to lead by example and realize the power of their influence,” she said in an interview Thursday. “Them modeling and getting the vaccine and tweeting about it sends a powerful message.”

About 70 percent of N.F.L. players are Black, a racial group that is already suspicious of the vaccine and has limited access to it, and whose members are killed by the virus at a higher rate. Only 41 percent of those who have received the vaccine nationally are people of color, according to the C.D.C. and the Kaiser Family Foundation. The distrust among some N.F.L. players mimics societal trends, Golden said.

“We don’t know their experiences growing up or interacting with the health care system,” Golden said. “Just because they are athletes doesn’t mean their lived experience doesn’t have influence, and I think we have to acknowledge that.”

The Denver Broncos were one of the first teams in the N.F.L. to vaccinate 85 percent of their players, thanks to a lot of education, discussion and communication, said George Paton, the team’s general manager.

Last season, Dr. Michelle Barron, the senior medical director of infection prevention at UCHealth, advised the franchise on Covid-related issues. As the vaccine became widely available this spring, she led informational sessions with the team and privately with players’ families if requested. She also helped coordinate a vaccine clinic in April at the Broncos’ facility. Their vaccination rate did not surprise her, she said.

“From the feedback I got, the important thing for them was to feel like they had the information, for them to be able to digest and then come back and ask smart questions,” Barron said in an interview Thursday.

As training camp progresses, unvaccinated players battling for roster spots may face challenges. Beasley said in a news conference that unvaccinated young players have told him they fear they may be cut. Ballard, the Colts general manager, said that those decisions are made on a case-by-case basis, but that the question of vaccination did make the process harder, especially for free agents whose unvaccinated status would mean they’d have to be tested more often. Regardless, he said he would try to evaluate fairly.

“Whoever wins the job on the field, that’s who’s making the team,” Ballard said. “I’m not going to take a player just because he’s vaccinated that hadn’t won the job. What message are you sending to your locker room?”

Players’ decisions on vaccination will probably be exposed over time. The unvaccinated are required to wear a mask when addressing the news media, unless they are outdoors and physically distant — a practice some inoculated players still choose to follow. Some teams, such as the Pittsburgh Steelers, identify unvaccinated players with colored wristbands, a tactic Cleveland Browns center J.C. Tretter, the president of the N.F.L. Players Association, called “nonsensical.” Asked if he was prepared to operate under similar circumstances if needed, Hilton said, “Absolutely.”

The stringent new rules, though, seem to have had an effect. Colts running back Nyheim Hines said that he initially did not want to be vaccinated, but that the protocols had changed his mind. He called the shift a “business decision.”

Tennessee Titans quarterback Ryan Tannehill agreed, saying he would not have received the vaccine otherwise.

“They’re trying to force your hand, and they ultimately have forced a lot of hands,” Tannehill said.