No Matter Who Wins, Here's Where Stocks Are Headed 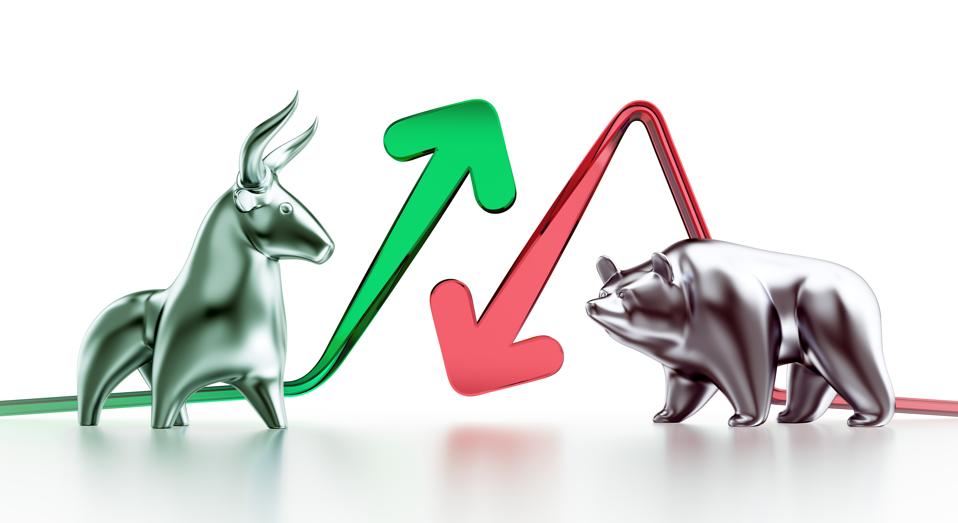 It was a choppy week for the stock market, as after sharp new rebound highs on Monday, the major markets turned lower until early Thursday. The S&P gapped lower going into Thursday, as the latest hopes of having a federal economic relief package before the election were dashed. An uptick in the new jobless claims before the open kept prices under pressure early in the day. 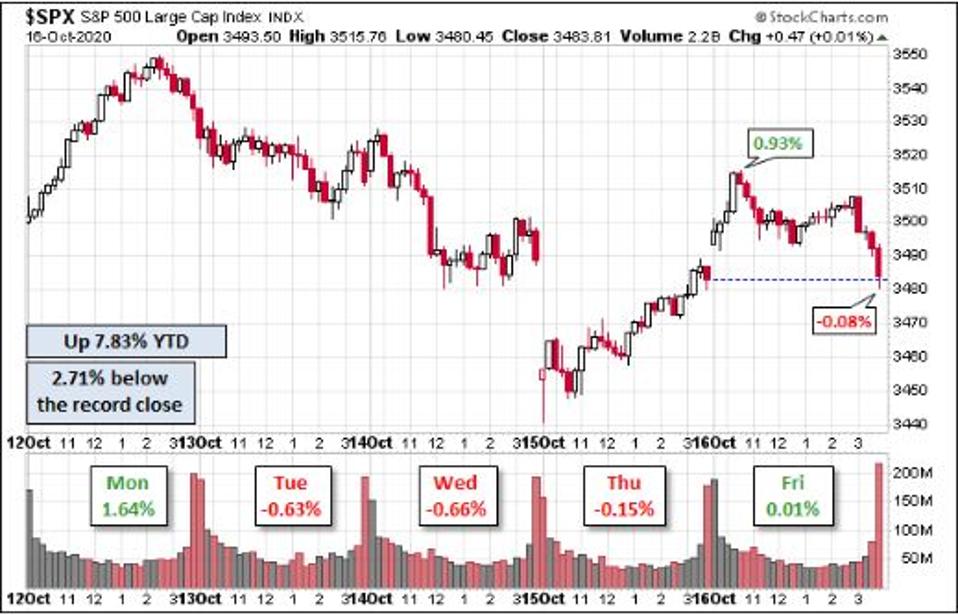 As the above hourly chart of the week’s action indicates, the S&P 500 opened 1% lower on Thursday. In early trading, the S&P 500 had a low of 3440.9, which was down 3% from Monday’s high of 3549.8. The S&P closed well above the early lows on Thursday and the rally continued early Friday but fizzled by the end of the day. The Friday close was 2.71% below Monday's record close.

The weekly performance was mixed. While the Nasdaq 100 was up 1.1% for the week, the Dow Jones Industrial and S&P 500 were just barely positive. The Dow Jones Utility Average surprised the financial press with its 1% gain, while the iShares Russell was down 0.3%. The SPDR Gold Shares (GLD) was the weakest, down 1.5%.

With just over two weeks before the U.S. presidential election, both political and investing pundits are bombarding us with their advice on who will win and where the stock market will go. As I emphasized last week, I hope you will concentrate on the data, not the news. Regular readers will be familiar with my view that the advance/decline line is the best tool for determining the stock market’s direction. So today, I'll be taking a look back at advance/decline action before and after the past four presidential elections. 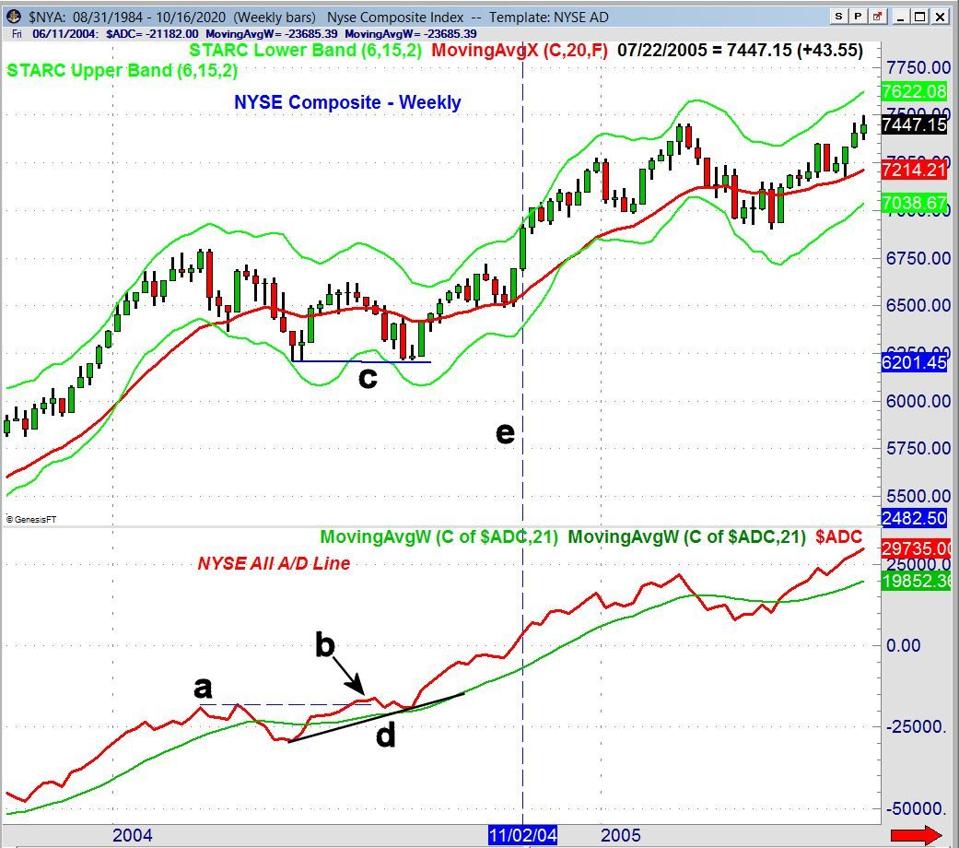 The 2000 bear market ended in early 2003, and the initial rally carried the market into early 2004 before it started to correct. A near-term bottom was formed in May 2004, and these lows were again tested in August (line c).

The NYSE All Issues A/D line was painting a much different picture: in July, it made a peak (point b) that surpassed its peak from April (point a), and was performing stronger than the NYSE Composite (line d). As the market retested the lows in August, the A/D line formed higher lows and just slightly tested its weighted moving average (WMA). By the end of August, it was rising sharply and was in a strong uptrend the week of the election (line e). 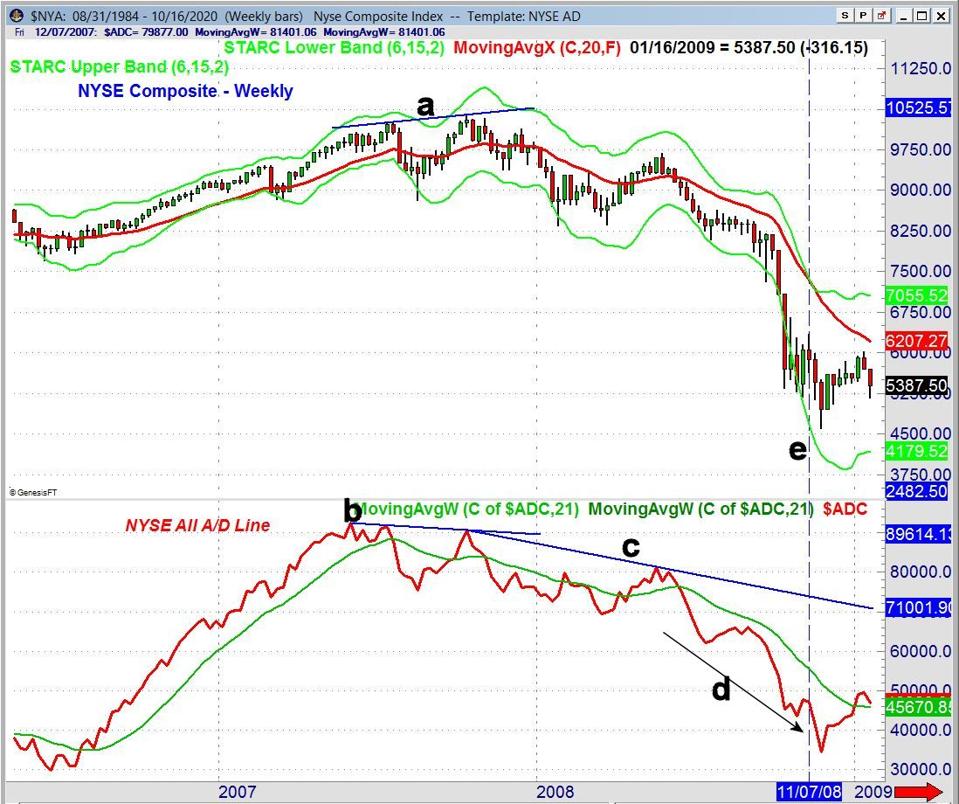 The bull market that began in 2003 lasted until early October 2007, with the NYSE Composite reaching a high of 10,387. The NYSE All A/D line peaked in June 2007 and formed a lower high in July, forecasting the trend change. The A/D line was even lower in October, forming a negative divergence from the NYSE. This divergence is evident when you compare the upward slope connecting the NYSE's highs (line a) and the downward slope of the line connecting highs in the A/D line (line b).

There was a classic bear market rally from March 2008 until May, before the A/D dropped sharply back below its WMA in June. By autumn, the A/D line was very weak (line d), which was consistent with a bear market. The outlook for the stock market was negative by election day, November 7, 2008 (line e). 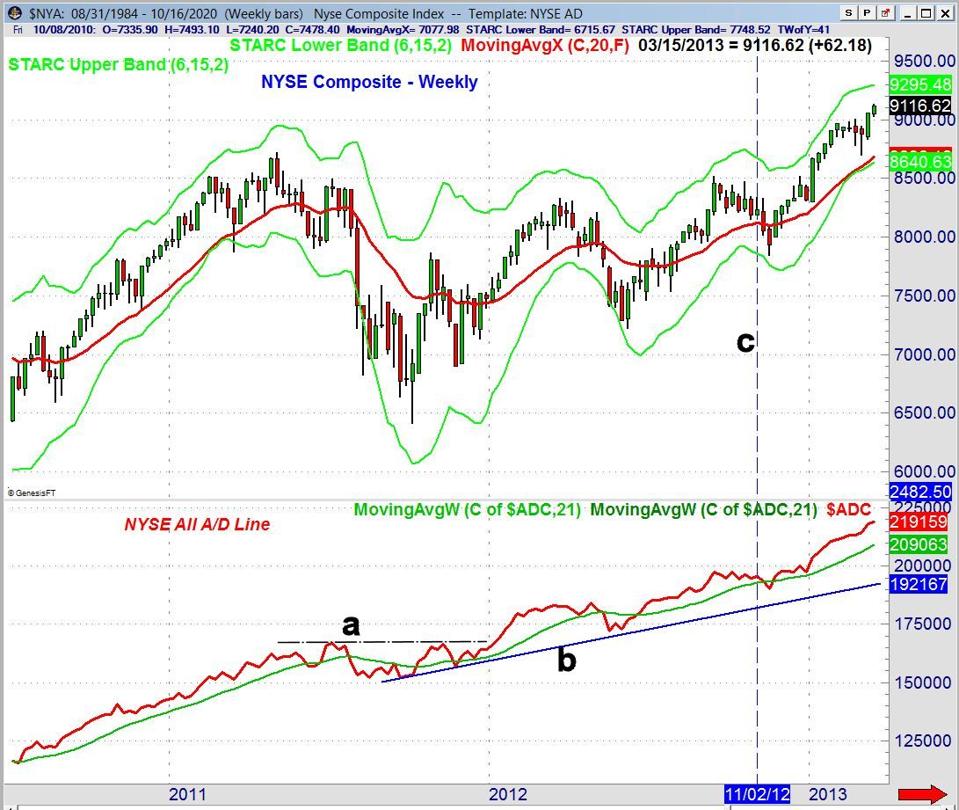 By the 2012 election, the new bull market was well underway. Even though the NYSE corrected sharply in 2011 with the downgrade of U.S. debt, the NYSE All A/D line did not drop nearly as much. By October 11, 2011, the A/D line analysis suggested that a bottom was in place.

Early in 2012, the A/D line moved through its resistance (line a), and the new high was a sign that the NYSE should also exceed the 2011 high. The A/D line (after a pullback in May 2012) moved back above its WMA and continued to lead the market higher. The two-week pullback after the election (line c) did not change the positive trend of the NYSE A/D line, as it was making a new high by early December 2012. 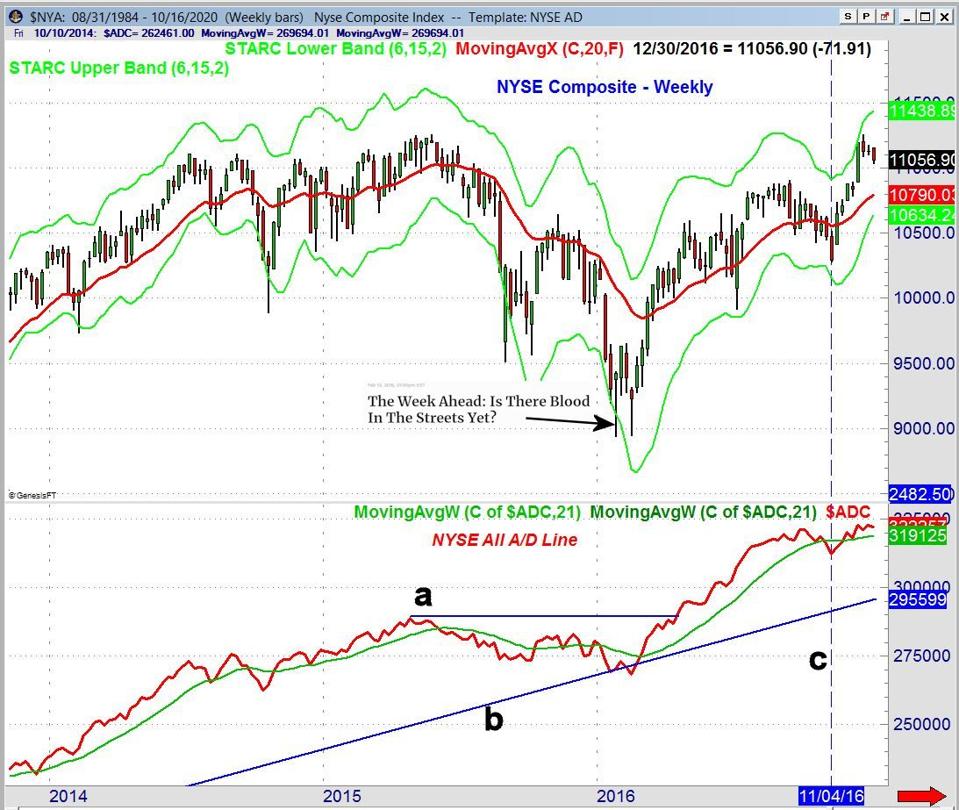 The weekly NYSE All A/D line diverged from prices in May 2015, and the NYSE corrected into early 2016. As I noted in my article on February 13, 2016, there were signs of a bottom from the daily A/D analysis. This was soon confirmed by the weekly A/D line, which had dropped to test the long term uptrend from the 2011 lows (line b).

By April 15, the NYSE All A/D line moved above its resistance (line a) and made a new high while leading prices higher. The A/D line made a new high again on September 23, before correcting as it dropped below its WMA for two weeks leading up to the election (line c). This did not change the positive trend, and by early December the A/D line had made a new high. The following year, 2017 was a strong one for the stock market. 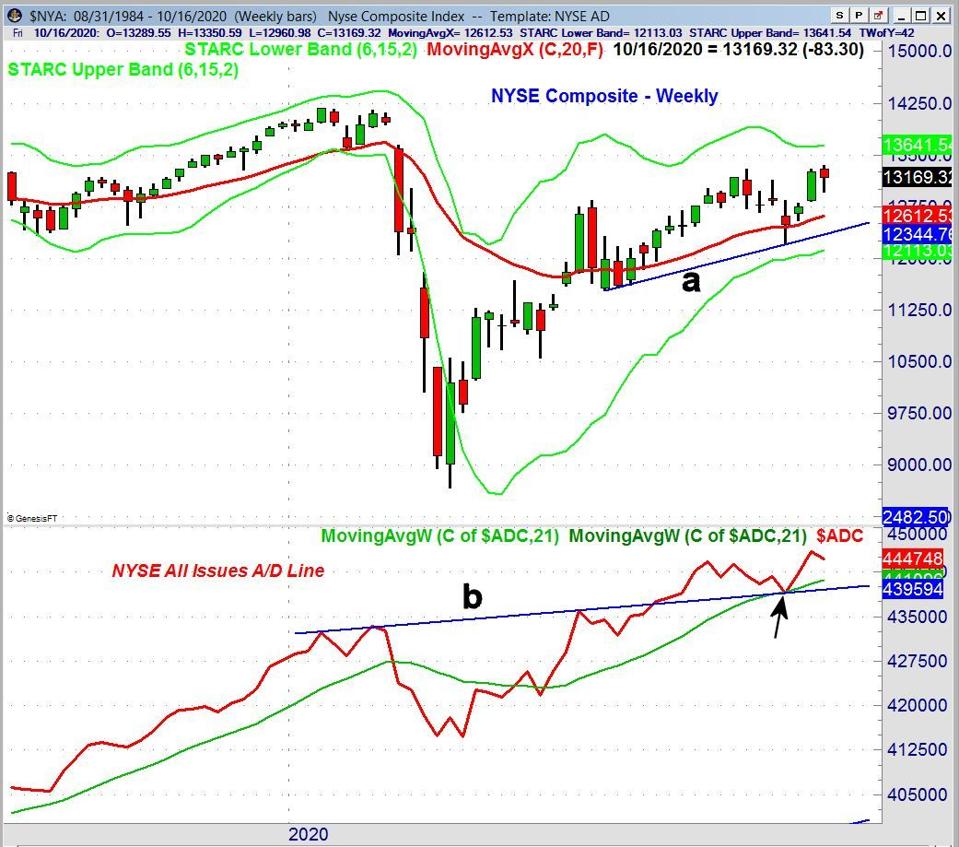 Even though the NYSE Composite was down 0.63% last week, the rally from the support (line a) is still intact. More importantly, the NYSE All A/D line made a new high with the close on October 9 and has rallied sharply from its WMA and the support (line b). The A/D line has been leading prices, which is an indication that the NYSE will overcome the highs from early in 2020. 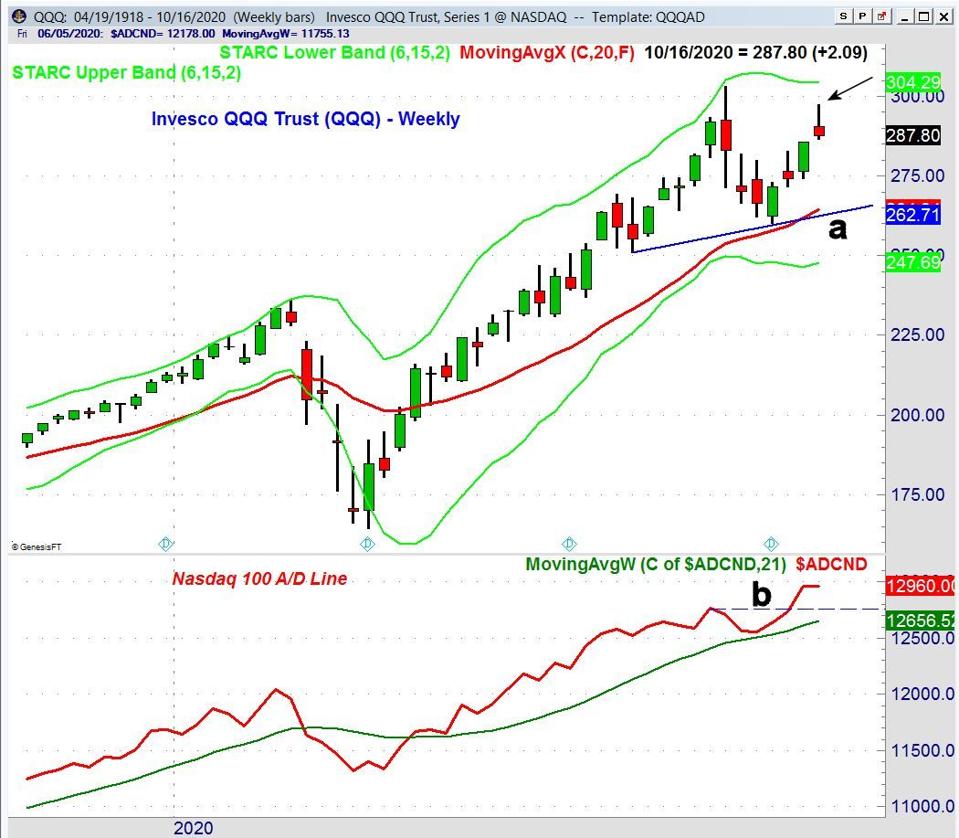 The weekly Nasdaq 100 A/D line has been leading prices higher since February 2019 and made a marginal new high last week. This is a sign that the early September high of $303.06 will be overcome, but there could be a pullback in the interim. The A/D line is well above its rising WMA, which does allow for a correction before the old high is overcome.

The bottom line? The advance/decline analysis indicates that new highs are likely before the end of the year. The analysis of the prior election years does not rule out a 1-2 week correction either right before or just after the election. I think the September 21 lows will hold on a closing basis. Heading into the elections, those not invested should look first towards the October lows, and then the 20-week EMAs, as levels to enter the market.

In my Viper ETF Report and the Viper Hot Stocks Report, I update subscribers with market analysis twice per week, along with specific buy and sell advice. Each report is just $34.95 per month. New subscribers also receive six free trading lessons, a $49 value. 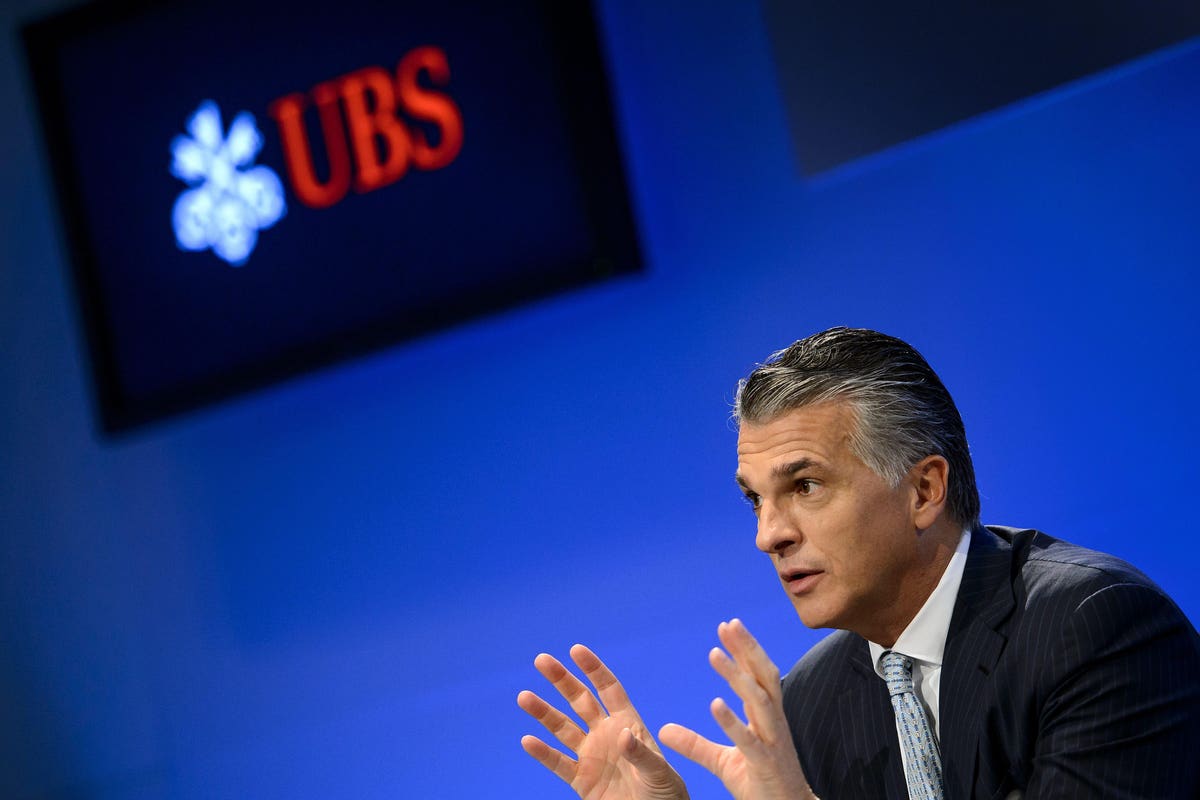 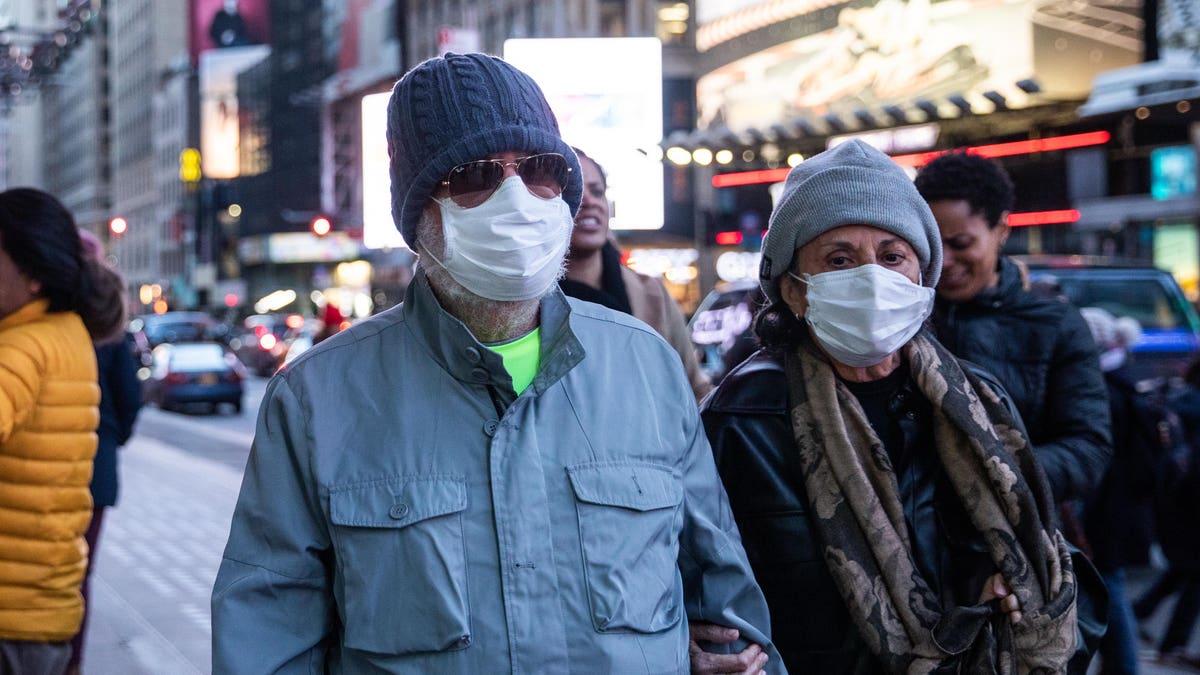