Pfizer Asks F.D.A. to Authorize Its Covid-19 Vaccine for Children 5 to 11

The agency has promised to move quickly on the request and has tentatively scheduled a meeting at the end of the month to consider it. 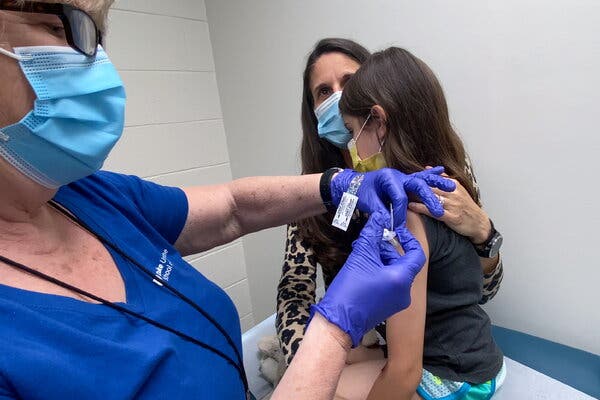 A 9-year-old receiving a second dose of Pfizer’s coronavirus vaccine in a clinical trial for children in Durham, N.C., in April.Credit...Shawn Rocco/Duke Health,via Reuters

WASHINGTON — Pfizer and BioNTech said on Thursday morning that they had asked federal regulators to authorize emergency use of their coronavirus vaccine for children ages 5 to 11, a move that could help protect more than 28 million people in the United States.

The companies have said they were submitting data supporting the change to the Food and Drug Administration. The agency has promised to move quickly on the request and has tentatively scheduled a meeting on Oct. 26 to consider it. A ruling is expected between Halloween and Thanksgiving.

“With new cases in children in the U.S. continuing to be at a high level, this submission is an important step in our ongoing effort against Covid-19,” Pfizer said on Thursday.

Parents across the United States are anxiously awaiting the regulators’ decision, which could affect family life and the operation of schools. Clearance depends not only on the strength of the clinical trial data, but on whether they can prove to regulators that they are able to properly manufacture a new pediatric formulation.

Dr. Janet Woodcock, the acting F.D.A. commissioner, said last week that children might require “a different dosage or formulation from that used in an older pediatric population or adults.”

Pfizer has proposed giving children one-third of the adult dosage. That might require adding more diluent to each injection or using a different vial or syringe. The company was expected to describe the method it intended to use in its submission to the Food and Drug Administration.

Regulators will have to examine the purity and stability of mass-manufactured doses of the vaccine and determine that it matches the quality and potency of doses given to children in clinical trials. A pediatric dose will also most likely require new labeling, with special codes that would allow the Centers for Disease Control and Prevention to track specific lots in case of reports of serious side effects.

Children rarely become severely ill from Covid-19, but the Delta variant drove nearly 30,000 of them to hospitals in August. According to the American Academy of Pediatrics, nearly 5.9 million Americans younger than 18 have been infected with the coronavirus. Of the roughly 500 Americans under 18 who have died, about 125 were children ages 5 to 11.

About one in every six Americans infected since the beginning of the pandemic was under 18 years old. But with the surge of the Delta variant, children accounted for as many as one in four infections last month, according to the American Academy of Pediatrics.

The Food and Drug Administration authorized emergency use of Pfizer’s vaccine for 12- to 15-year-olds in May. Since then, more than 8.2 million children in that age group have received at least one dose, and more than 6.7 million have been fully vaccinated.

The infection rate in the United States is currently falling, prompting hope that the Delta variant is ebbing. But public health experts worry that the onset of colder weather could result in increased transmission.

Although federal regulators are under enormous pressure to quickly review Pfizer’s application, they also face other pressing decisions. Next week, they might rule on whether people who received the Moderna and Johnson & Johnson coronavirus vaccines should receive booster shots, both potentially contentious decisions.

Public health experts have said that the agency’s review of a Pfizer pediatric dose would be closely scrutinized. According to a recent survey conducted by the Kaiser Family Foundation, roughly a third of parents of children between ages 5 and 11 said they would wait and see before allowing their children to receive such a shot.

Dr. Walt A. Orenstein, an epidemiologist at Emory University and a former director of the U.S. immunization program, said that given the competing pressures on the Food and Drug Administration to make vaccine decisions quickly but carefully, public discussion was essential.

The State of Vaccine Mandates in the U.S.

Vaccine rules. On Aug. 23, the F.D.A. granted full approval to Pfizer-BioNTech’s coronavirus vaccine for people 16 and up, paving the way for mandates in both the public and private sectors. Such mandates are legally allowed and have been upheld in court challenges.College and universities. More than 400 colleges and universities are requiring students to be vaccinated against Covid-19. Almost all are in states that voted for President Biden.Schools. California became the first state to issue a vaccine mandate for all educators and to announce plans to add the Covid-19 vaccine as a requirement to attend school, which could start as early as next fall. Los Angeles already has a vaccine mandate for public school students 12 and older that begins Nov. 21. New York City’s mandate for teachers and staff, which went into effect Oct. 4 after delays due to legal challenges, appears to have prompted thousands of last-minute shots.Hospitals and medical centers. Many hospitals and major health systems are requiring employees to get vaccinated. Mandates for health care workers in California and New York State appear to have compelled thousands of holdouts to receive shots.Indoor activities. New York City requires workers and customers to show proof of at least one dose of the Covid-19 for indoor dining, gyms, entertainment and performances. Starting Nov. 4, Los Angeles will require most people to provide proof of full vaccination to enter a range of indoor businesses, including restaurants, gyms, museums, movie theaters and salons, in one of the nation’s strictest vaccine rules.At the federal level. On Sept. 9, President Biden announced a vaccine mandate for the vast majority of federal workers. This mandate will apply to employees of the executive branch, including the White House and all federal agencies and members of the armed services.In the private sector. Mr. Biden has mandated that all companies with more than 100 workers require vaccination or weekly testing, helping propel new corporate vaccination policies. Some companies, like United Airlines and Tyson Foods, had mandates in place before Mr. Biden’s announcement.

He said many parents were wavering between fear of Covid-19 and fear of side effects of a pediatric vaccine. If they were less worried about the consequences of coronavirus infection, he said, safety would be their top priority. If they were more worried, the vaccine’s effectiveness would matter more. As with other vaccines, Dr. Orenstein said, pediatricians would play a critical role in easing parental anxiety.

Pfizer’s clinical trial for children was not intended to draw meaningful conclusions about the vaccine’s ability to prevent disease or hospitalizations. Instead, researchers looked at antibody levels, comparing them with levels in adults that had conferred high protection. Regulators are expected to compare those immune responses to vaccine efficacy data in the adult population.

The trial included 2,268 children, two-thirds of whom had received two doses of the vaccine three weeks apart. The remaining volunteers were injected with two doses of saltwater placebo. Regulators over the summer asked for the trial size to be expanded to 3,000 children.

At a virtual panel on Covid-19 last week, Norman Baylor, the former director of the Food and Drug Administration’s vaccines office, said that the number of participants in Pfizer pediatric study was noticeably small. The adult trial involved about 44,000 people.

“It does beg the question of the size, given what we have for the adults: Would one expect more for the pediatric population?” he said. “They may be thinking, ‘Well, we know the vaccine is safe, because look at how many people we had in the adults.’ But as we know, things may shift in that pediatric population.”

The Pfizer-BioNTech and Moderna vaccines have been tied to increased risks of myocarditis, or inflammation of the heart muscle; and pericarditis, inflammation of the lining around the heart, particularly in younger men. In August, the Food and Drug Administration published results from an analysis of Pfizer-BioNTech’s vaccine that used a U.S. health care claims database and found that the risk of the conditions in 16- and 17-year-old vaccinated boys could be as high as 1 in 5,000.

The cases in the database were unconfirmed, but they were considered a reasonable estimate of possible risk, the agency wrote.

A lower dose of the vaccine for children could alleviate those concerns.

Officials in a number of countries have recommended a single dose of the Pfizer-BioNTech vaccine for children ages 12 and older, which would provide partial protection from the virus, but without the potential effects occasionally observed after two doses. Sweden and Denmark joined those countries, announcing on Wednesday that adolescents should get only one dose of the Moderna vaccine.