The nation fell silent in memory of the Prince Philip on Saturday afternoon, as the funeral marking his life of service took place at St George’s Chapel in Windsor Castle.

The Duke of Edinburgh’s “unwavering loyalty” to the monarch was highlighted at the service, as the Queen bid a final farewell to her beloved husband – her “strength and stay” through 73 years of marriage.

The funeral reunited Prince William and Prince Harry after their much-publicised fall-out. Although they sat opposite each other inside the chapel, the brothers were seen talking together as they left the service.

A poem by the Poet Laureate Simon Armitage has been published to mark the occasion. Mr Armitage said Philip had “hated sycophancy”, and so he had written a poem that was “in service of all people like him”.

The Duke and Duchess of Cambridge were seen talking to Prince Harry after they left the funeral service at St George’s Chapel.

The brothers have been through a well-publicised fall-out over the Megxit process and the Oprah interview, but William had insisted they would speak again. 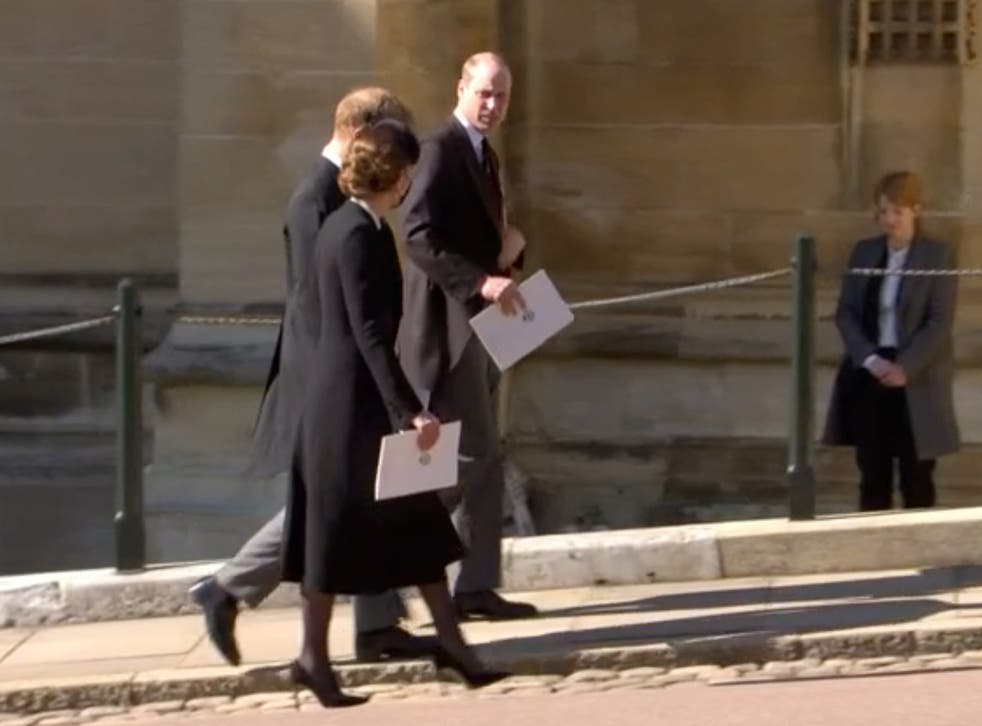 Four Royal Marines buglers sounded The Last Post at the ceremony’s close. After the blessing, pronounced by the Archbishop of Canterbury, the congregation remained standing as the choir sang the national anthem – bringing the funeral to an end at 3.50pm.

The Queen and her family left the Chapel escorted by the Dean of Windsor and the Archbishop of Canterbury.

The Queen outside St George’s Chapel

Topless protester taken away by police outside castle

A topless protester has been taken away by police near Windsor Castle after she shouted “save the planet” following the minute’s silence for Prince Philip.

The woman ran in front of the crowds outside as it started clapping following the start of the service. She then jumped onto a statue of Queen Victoria, before police officers apprehended her and led her away.

‘Go forth upon thy journey’

“May thy portion this day be in peace, and thy dwelling in the heavenly Jerusalem. Amen.”

If you are following the service and are interested in the music, a four-strong St George’s Chapel choir is performing perform the only hymn of the ceremony, William Whiting’s Eternal Father, Strong to Save, and three additional songs written at the behest of Prince Philip.

The Jubliate, which was written by English composer Benjamin Britten for the St George’s Choir at the Duke’s request, translates literally to “song of joy”.

William and Harry sit opposite as service gets under way

The Duke of Sussex and Duke of Cambridge are sitting opposite one another in St George’s Chapel, as the brothers bid farewell to their grandfather.

The members of the royal family in the procession quickly put on their face masks as they entered the chapel.

“We have been inspired by his unwavering loyalty to our Queen, by his service to the nation and the Commonwealth, by his courage, fortitude and faith,” says the Dean of Windsor.

The Queen arrives for funeral service

The Queen arrives at Windsor Castle to join the procession

The senior members of the royal family have joined the Duke of Edinburgh’s funeral procession, which has set off with the coffin for St George’s Chapel.

Walking behind are Philip’s children – Prince Charles, princess Anne, Prince Andrew and Prince Edward – while in front of the coffin are the Services chiefs.

Prince William and Prince Harry are behind the four children, but are not walking shoulder to shoulder during the funeral procession – separated by their cousin Peter Phillips.

Grenadier Guardsmen carrying the duke’s coffin have emerged from the castle’s state entrance and placed it in the specially-created Land Rover.

Members of the royal family who will walk in the funeral procession followed the coffin – set to begin its journey to St George’s Chapel.

Meghan Markle is understood to be watching Prince Philip’s funeral on TV from her home in the US. The Duchess of Sussex was not cleared for travel by her doctor at this stage in her pregnancy.

The card on the wreath left for the Duke by the Sussexes in St George’s Chapel was handwritten by Megan.

Prince Harry, the Duke of Sussex, will be wearing his KCVO Neck Order and Star, his Afghanistan campaign medal, Gold Jubilee medal, and Diamond Jubilee medal at his grandfather’s funeral today.