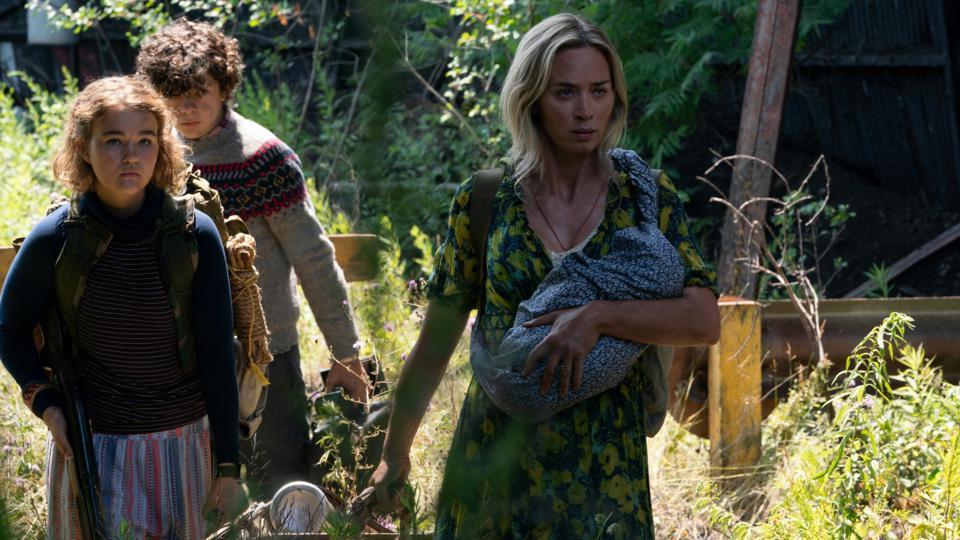 Ten years ago, Paramount was the undisputed king of Hollywood franchise-friendly tentpole blockbusters.

With $2.04 million on Thursday and a $97.3 million domestic cume after 14 days, Paramount’s A Quiet Place part II is about to become the first movie to pass $100 million domestic since the February of 2020. Call it “pandemic-era” or whatever, but the Emily Blunt/Millicent Simmonds/Noah Jupe/Cillian Murphy horror sequel, again directed by John Krasinski, will cross the $100 million mark today (or like tomorrow at 12:05 am), becoming the first movie to do so since Paramount’s Sonic the Hedgehog.

Yes, it is cruel irony that Paramount will have the last $100 million-plus earner before Covid ($146 million from a $70 million Fri-Mon debut) and the first (a likely over/under $145 million finish from a $57 million Fri-Mon debut). Meanwhile, Mark Wahlberg’s miserable Infinite is premiering on Paramount+ this weekend while Chris Pratt’s (presumably better) The Tomorrow War was sold to Amazon for $200 million.

That we’re at the ten-year-anniversary of J.J. Abrams’ Super 8 makes it every more bittersweet. Paramount ruled the franchise tentpole world from around 2007 (Transformers) to 2014 (Teenage Mutant Ninja Turtles), with the likes of Iron Man, Indiana Jones and the Kingdom of the Crystal Skull, Kung Fu Panda, Star Trek, G.I. Joe: The Rise of Cobra, The Last Airbender (which opened with $70 million over the Thurs-Mon July 4 holiday in 2010), How to Train Your Dragon, Thor, Captain America and World War Z dominating or holding their own on the regular.

That’s not even including the various DreamWorks sequels, Transformers follow-ups and reenergized (starting in 2011) Mission: Impossible sequels. So, yeah, before Disney bought Marvel and Fox (and then Comcast) took DreamWorks, the Viacom-owned studio was making a go of it. This was the before-time, back when Paramount could also still get big hits out of Paranormal Activity and Shutter Island, as well as star-driven comedies like Daddy’s Home in late 2015. Paramount was so dominant that Super 8 was sold as a “just a movie” anti-blockbuster summer counterprogramming to Paramount’s own franchise summer biggies.

Last year was supposed to be Paramount’s comeback year, with Sonic, A Quiet Place 2, Coming 2 America, Top Gun: Maverick and Sponge On The Run putting them back on the proverbial map after years struggling with the collapse of the star-driven studio programmer. Paramount and Sony thrived during a time when “a Julia Roberts rom-com,” “an Adam Sandler comedy” or “a Will Smith action fantasy” was a franchise unto itself. Once the bottom fell out on that, thanks to streaming and changing moviegoing tastes, the studios without the A+ IP were left to tread water.

Ten years later, we’ve gone from “Hey, neat, X-Men: First Class kinda works as a 1960’s spy movie” to “This 1960’s spy movie won’t sell without a comic book character.” Franchise films have gone from appropriating genre to supplanting it. We’ve gone from original nostalgia-targeted 1980’s throwbacks that merely remind you of 80’s-era IP to Jason Reitman’s Ghostbusters: Afterlife, which is playing the same game with explicitly 80’s-era franchise exploitation. Infinite is a terrible Matrix knock-off, but Paramount dropped it on streaming partially because its delayed theatrical release may have conflicted with, well, The Matrix 4.

All of this, and I’ve been discussing this for five years, makes the current milestone a little bittersweet. A Quiet Place was itself the end of a Paramount slump for essentially all of 2016 and 2017. DWA was long gone, Marvel was taking over Hollywood and Paramount’s remaining franchises (TMNT, Transformers, Star Trek, etc.) were flaming out right as audiences stopped showing up to “regular movies” like Whisky Tango Foxtrot, 13 Hours, Downsizing, Gemini Man and Nobody’s Fool. And now, after a pandemic-driven year, Coming 2 America and Tomorrow War went to Amazon, Trial of the Chicago 7 and Lovebirds went to Netflix.

Nonetheless, A Quiet Place part II, whose predecessor started what we all hoped might be a new era of theatrical strength and which itself was supposed to continue what was supposed to be a year-long theatrical hot streak, is the first movie in nearly 1.5 years to pass $100 million domestic. Godzilla Vs. Kong ($99 million-and-still-kicking) will soon join it, as likely will F9, Black Widow and (fingers-crossed) In the Heights if the latter’s mainstream reception lives up to online obsession. As for Paramount, their other summer movies are… Snake Eyes and Paw Patrol.