Review: ‘Dopesick’ Depicts the Opioid Crisis From All Sides

A Hulu mini-series traces the story of OxyContin from the offices of Purdue Pharma to the examining room of an Appalachian doctor (played by Michael Keaton). 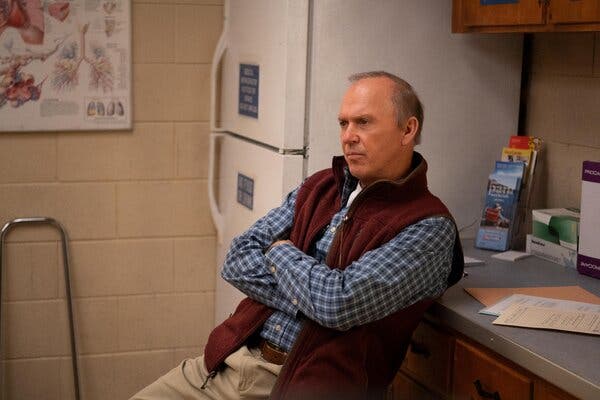 Michael Keaton plays a doctor on the front lines of the opioid epidemic in “Dopesick,” on Hulu.Credit...Gene Page/Hulu

“Dopesick,” Hulu’s ambitious and intermittently compelling mini-series about the role of Purdue Pharma in the opioid crisis, is built around the theme of pain. Nearly every significant character, whether or not they’re taking Purdue’s best-selling drug OxyContin, is suffering.

Some of the injuries are physical, like the banged-up back sustained by a young mine worker, Betsy Mallum (Kaitlyn Dever). But she’s already under duress: She’s a lesbian terrified of coming out to her religious, Virginia hill country parents. The other characters, some fictional (like Betsy) and some based on actual people, are afflicted with their own forms of pain: grief over a dead wife, a mournful divorce, a struggle with prostate cancer. Even the entitled villain of the piece, the Purdue executive Richard Sackler (Michael Stuhlbarg), grimaces with silent agony over the belittlement he receives from the other members of the family company.

If those sound to you like the underlying conditions of soap opera, your diagnosis is not incorrect. “Dopesick” was created by Danny Strong, best known in television for creating, with Lee Daniels, the long-running hip-hop melodrama “Empire.” True white-collar crime stories, especially at feature-film lengths, tend to focus on investigations and courtroom sparring. In adapting Beth Macy’s book “Dopesick: Dealers, Doctors and the Drug Company That Addicted America” for Hulu, Strong fleshes out the eight episodes with the domestic dramas of invented characters on the front lines of the OxyContin epidemic, primarily Betsy and her doctor, the widowed city transplant Samuel Finnix (Michael Keaton).

The story lines Strong and his fellow writers give their Appalachian everypeople are a mixed bag, sometimes skating along on addiction and recovery boiler plate that’s interchangeable with a thousand other dramas. But they’re generally watchable because of the bone-deep credibility of Dever’s and Keaton’s performances. Keaton, in his first lengthy TV performance since he played the C.I.A. agent James Angleton in “The Company” in 2007, has a lot to overcome — Sam is saddled with the script’s most melodramatic developments — but he always has a handle on the character’s mix of folksy dependability and tamped-down anguish.

Dever, following up on her powerful portrayal of a rape survivor in “Unbelievable,” benefits from some of the better-conceived moments in “Dopesick,” like a chilling encounter at a support-group meeting in which another participant offers to sell OxyContin to Betsy on the spot. An early scene at the Mallums’ dinner table, with the crack performers Mare Winningham and Ray McKinnon as Betsy’s parents, is a delightful, evocative slice of family life; it’s a little reminiscent in its rhythms of “Diner,” another work by the episode’s director, Barry Levinson.

The Sam and Betsy plots, and the performances of Keaton and Dever, are attenuated, though, because of the all-at-once structure Strong has devised for the series. “Dopesick” continually jumps among time frames (beginning with the development of OxyContin in the 1980s) and sets of characters, chronicling the travails of the drug’s users simultaneously with the strong-arm sales and marketing tactics of Purdue Pharma and the eventual investigations by both the Justice Department and the Drug Enforcement Administration.

And those other strands — the historical material, featuring depictions of real people at the drug company and in the government agencies — can tend to feel didactic and a bit hollow. Characters spend a lot of time telling each other, for our benefit, how the pharmaceutical world works. They don’t convince you the way Sam and Betsy do, and with the exception of John Hoogenakker as a tenacious assistant U.S. attorney, the actors aren’t able to do much with them. Rosario Dawson as a D.E.A. agent and Peter Sarsgaard as another U.S. attorney are uncharacteristically flat, and Stuhlbarg plays Richard Sackler on a note of unrelieved glumness.

The details of the story, though — particularly the successive marketing schemes devised by the Purdue executive Michael Friedman, played with cleverly bland insouciance by Will Chase — are fascinating in their own right. How accurately they’re portrayed is a separate question, outside the scope of this review. (Seven episodes were available.) As the underpinning for morally outraged soap opera, they pass inspection.