Review: In ‘You Are Here,’ Dancing and Splashing at Lincoln Center

A selection of New Yorkers reflecting on their pandemic experiences became part of this piece, conceived and choreographed by Andrea Miller. 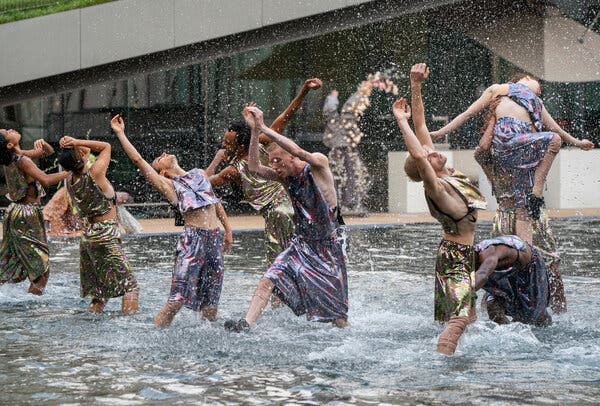 In “You Are Here,” the dancers wear Oana Botez’s slinky, shimmering sequin shorts and tops, a clever nod to fish scales.Credit...Stephanie Berger

As dance regains its footing in the performing arts world this summer — gradually and with grit and the best of intentions — putting on a show carries a different weight. How exactly must the show go on? Who shares responsibility and who gets the credit? If the past year and a half has taught us anything, it’s to pay attention to those on the edges, to recalibrate just who and what are essential. Art and artists, certainly. But it takes more than artists to make art happen.

“You Are Here,” a sculpture and sound installation on Hearst Plaza commissioned by Lincoln Center, contains audio portraits by the composer and sound artist Justin Hicks. The piece reveals the pandemic experiences of artists as well as people who work behind the scenes, including Lila Lomax, who works in Lincoln Center Security — and sings while on the job — Cassie Mey, who works in the dance division at the The NewYork Public Library for the Performing Arts, and Valarie Wong, a nurse at NewYork-Presbyterian Hospital. The setting is also adorned with fabric sculptures by the scenic designer Mimi Lien whose headless forms, a textural mix of fabric and dried and fresh flowers, sprout up throughout the plaza a little like avant-garde scarecrows.

Much of the performance takes place in the Paul Milstein Pool, which stretches across the plaza.Credit...Stephanie Berger

On Saturday night, it shifts into a live performance, where some of those New Yorkers become part of the piece, expressing personal ruminations on their pandemic experience, alongside dancers from Gallim, a company directed by Andrea Miller. She, along with Lynsey Peisinger, directs “You Are Here,” which also features choreography and concept by Miller.

Layered and long-winded, it’s an attempt to look to the past as it celebrates the possibility of the future. Water is important. Much of it takes place in the Paul Milstein Pool, which stretches across the plaza.

For choreographers, the pool is a tempting site. Who wouldn’t want to splash around in water? But for the viewer, the problem is that it’s much more enthralling to be in water than to watch others in it. Throughout the performance, the choreography places dancers — wearing Oana Botez’s slinky, shimmering sequin shorts and tops, a clever nod to fish scales — in its depths. Yet whether they push through it, fall backward into it or, of course, thrash at its surface, a certain monotony takes over.

At times, this overloaded production feels more like a podcast with dances woven in than a poetic exploration of the here and now. Moments were more memorable than the whole, as when Jermaine Greaves, the founder of Black Disabled Lives Matter who works in accessibility at Lincoln Center, spoke lovingly about his mother, who taught him resilience, and spun in his wheelchair in a dance of elation.

As part of the show, Jermaine Greaves, the founder of Black Disabled Lives Matter, spun in his wheelchair in a dance of elation.Credit...Stephanie Berger

Susan Thomasson, a dancer who works with Lincoln Center Education, spoke live and in a voice-over about “noticing soft, but prickly grass, smooth metal, still with the heat of the afternoon and a slight breeze on my cheek” as she inched along the edge of a grassy hill, touching a railing and opening her arms like wings. Talking about the migration of wild geese, she then, with undeniable fervor, transformed into one herself, taking high steps and echoing their loud honks before slipping into the water herself. (She had the confidence of Moira Rose.)

In between, the dancers continued to slip in and out of the water — reaching their arms and twisting their torsos as they dipped in and out of expressive choreography; occasionally one swept through the plaza, both the pavement and the water, holding a sheet of white fabric like a cape as if clearing the space. The work ended on a high note, with a scene featuring the ballroom icon Egyptt LaBeija, and a raucous dance — really, a pool party — to Whitney Houston’s “I Wanna to Dance With Somebody.”

But the most affecting performance came from Valarie Wong, a nurse in an intensive care unit at New York-Presbyterian Hospital, who spoke about being consumed by fear and anxiety.

As she told her story — it included how she would prepare patients for their death as she “tried to send them off in dignity” — she ran laps around three sides of the plaza and sliced into the water for the fourth. “I am more present now than I ever have been before,” she said. “I used to always look to the future. But the present is the gift.”

In “You Are Here,” Wong, who specializes in the heart — both medically and, it turns out, in other realms as well — brought us into a space that was as full of reflection as it was discovery. In a sense, this was the truest ending, the one that made you think.

“You Are Here” continues at Hearst Plaza through July 30.