Part mixtape and part séance, this opera project by the famed performance artist attempts to unite two divas across time. 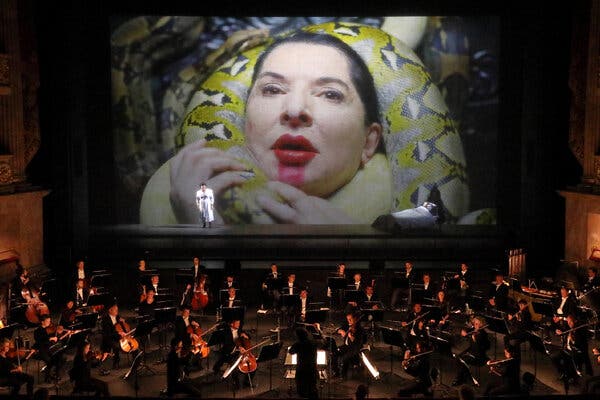 Marina Abramovic’s “7 Deaths of Maria Callas,” in Munich, includes opera excerpts and short films such as this one, inspired by “Otello.” (Leah Hawkins is onstage at left, with Abramovic in bed.)Credit...Wilfried Hösl

MUNICH — In Leos Carax’s new film, “Annette,” the husband and wife played by Adam Driver and Marion Cotillard are described in inverse terms. As a comedian, he kills every night; as an opera star, she dies.

That’s of course a reductive view of opera. But the alignment of the art form and demise persists in the popular imagination, and guides “7 Deaths of Maria Callas.” A dramaturgically misguided séance of a project by the performance artist Marina Abramovic, it played to its largest in-person audience yet on Tuesday at the Bavarian State Opera here, after a heavily restricted run and livestream last year. It is bound for Paris and Athens in September, then Berlin and Naples — and who knows where else, with Abramovic’s celebrity behind it.

“7 Deaths” is a meeting of divas in which Callas is invoked through a series of the arias for which she was notable. She is then inhabited onstage and in short films — the summoning of a spirit who, Abramovic argues, is still very much with us.

In the work, Abramovic inhabits Maria Callas, miming to a recording of “Casta Diva.”Credit...Wilfried Hösl

She’s right. Callas died in 1977, yet lives on in a still-robust stream of albums, art books and, yes, hologram concerts. She was known even to a public beyond opera as tabloid fodder, especially because of her affair with Aristotle Onassis — a love triangle involving Jacqueline Kennedy, his eventual wife. But her pop celebrity emerged from her being an indelible artist, who contributed to the 20th-century resurrection of bel canto repertoire with a transfixing stage presence. Even when silent, she emoted with the entirety of her face, arrestingly expressive with just a small hand gesture. Her voice failed her too early, but she embodied the “Tosca” aria “Vissi d’arte”: “I lived for art.”

That voice caught the attention of a young Abramovic, who has said that she first heard Callas on the radio when she was a 14-year-old in Yugoslavia. Since then she has been haunted by their similarities: They share astrology signs, toxic relationships with their mothers and, she told The New York Times last year, “this incredible intensity in the emotions, that she can be fragile, and strong at the same time.”

In the opera’s initial run, Adela Zaharia, left, sang an aria from “Lucia di Lammermoor.” On Tuesday, it was sung by Rosa Feola, in a standout performance.Credit...Wilfried Hösl

In that interview, Abramovic noted one essential difference: how they reacted to losing the loves of their lives. Callas, in her view, died of a broken heart — a heart attack, to be exact — but Abramovic, so shattered that she stopped eating or drinking, eventually survived by returning to work.

All this background about “7 Deaths” is clearer than the work itself, in which Callas is never present enough to persuasively intertwine with Abramovic, who upstages the great diva throughout. That’s the insurmountable flaw of the project, and the main reason it doesn’t belong in an opera house.

“7 Deaths” is best experienced in person; the spatial audio design and immersive, big-screen film element made its 95-minute running time a breeze on Tuesday, compared with the tedious livestream last year. But its use of live performers relegates them to mere soundtrack, while also erasing Callas from her own history.

This might have been more satisfying as a set of video installations, something like Julian Rosefeldt’s “Manifesto.” If Abramovic’s homage were accompanied by Callas’s storied recordings, the goal of joining and blurring divas could be more naturally achieved. Instead, “7 Deaths,” directed by Abramovic with Lynsey Peisinger, never quite approaches actual drama in its succession of arias and films, then its dreamy re-creation of Callas’s final moments in her Paris apartment.

Nadezhda Karyazina, left, sang the role of Carmen last year against a backdrop of a video with Willem Dafoe, left onscreen, and Abramovic. On Tuesday, Samantha Hankey sang it.Credit...Wilfried Hösl

The piece does include new music, by Marko Nikodijevic — ably conducted, along with the opera excerpts, by Yoel Gamzou. The overture begins with haunting bells and slippery melodies whose glissandos render them distant memories of unplaceable tunes. Behind a scrim, Abramovic lays still in a bed under soft lighting; not since Tilda Swinton has an artist so easily gotten away with sleep as performance.

Then swirling clouds are projected onto the scrim — a tacky recurring “visual intermezzo,” as it is called in the credits — and a maid enters. She is the first of seven singers who dress identically and whose arias follow introductions in the form of poetic texts prerecorded by Abramovic.

Their onstage appearances are an insult to the singers, who feel like interchangeably anonymous musical accompaniment to the short films — though Feola’s Lucia was defiantly present, a performance that captured the role’s emotional force and vocal acrobatics, even stripped of its dramatic context.

In the work’s coda, Abramovic imagines herself in Callas’s Paris apartment on the day she died.Credit...Wilfried Hösl

A spotlight remains throughout on the sleeping Abramovic, as behind her the short films — starring her and a game Willem Dafoe, and directed by Nabil Elderkin — provide not reflections on Callas but (on a superficial level) the arias themselves, and (on a more thoughtful one) the nature of operatic artifice.

In their embrace of excess, these videos flirt with winking camp. As Abramovic falls from a skyscraper in slow motion, inspired by “Tosca,” her enormous earrings dance in zero gravity; when Dafoe wraps thick snakes around her neck to strangle her like Desdemona, their slithering bodies smear her lipstick. Her Carmen is a bedazzled matador, while in the “Norma” film she and Dafoe trade gender roles, with him in a glittering gown and the penciled eyebrows of Marlene Dietrich.

Little, if anything, is said here about Callas, but after the seventh aria, Nikodijevic’s music returns — now rumbling and tumultuous, with singers and instrumentalists perched in the theater’s boxes — as the scene changes to her apartment on the day of her death. It’s realistic yet suggests a place beyond, the window opening not to a streetscape but to a pale blue emptiness.

In this long coda, Abramovic’s prerecorded voice both gives her directions for onstage movement and imagines Callas’s final thoughts in a collage of non sequiturs resembling a mad scene. She contemplates her luxurious bedding, “Ari” Onassis, her gay friends (Luchino Visconti, Pier Paolo Pasolini, Franco Zeffirelli, Leonard Bernstein). Then, at some point, she leaves through a door. The maids come in, dispassionately clean the room and drape black fabric over the furniture.

One of them lingers, opening a turntable and dropping the needle on a record of “Casta Diva.” The sound is scratchy, but a distinct voice comes through: Callas, for the first time. Abramovic returns to the stage, in a sparkling gold gown, and mimes the performance — an outstretched hand, a downcast look. The two divas unite at last, too late.