Scenes From a Dude Ranch on the High Plains

My horse was ready to bolt — his ears pricked, his muscles tense. A few feet ahead, a herd of wild horses stared back at us; they’d been unaware of us for most of our ascent from the valley below. Horned lizards shuffled in the sagebrush beneath us, but my horse’s gaze remained locked on his untamed brethren.

Moments later we were galloping at full speed beneath the rugged backdrop of the towering Absaroka Range. We fell in line with the back of the herd — alongside the foals scrambling to keep up with their mothers — and were bombarded by chunks of earth flying up from their thundering hooves. I squinted to keep the dust out of my eyes. A herd of pronghorn watched from a distance, well camouflaged among the gold-tinted grasslands of the Wind River Indian Reservation’s high-altitude plains. 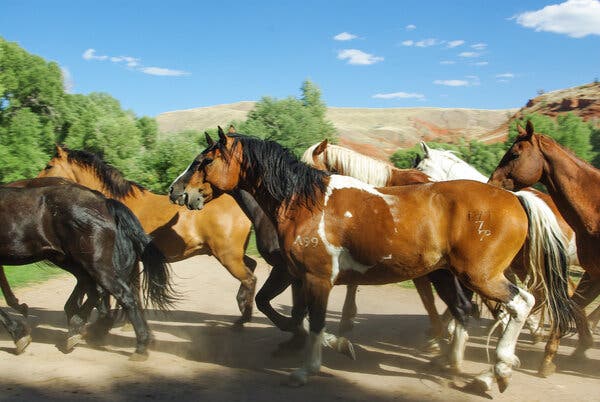 Horses make their way to a meadow after a day carrying riders through the vast mountains that surround the ranch.

In the summer of 2006, I traveled from my home country of Wales to Wyoming to spend a few months working as a horse wrangler at the Lazy L&B Ranch. There, as part of a team of seven wranglers, I took guests from around the world on exhilarating trail rides through rivers, valleys, forests, canyons and mountains, riding above 9,000 feet to find spellbinding views that stretched endlessly in every direction, without any sign of human presence.

Guests from the Lazy L&B Ranch ride along a ridge while storm clouds loom.

My time in Wyoming was a fulfillment of a childhood fantasy of working as a horse wrangler on a ranch in the American West.

I grew up in a tiny hamlet in South Wales called Idole, where, from the age of 4, my thoughts and dreams were consumed by all things equine. As a child, I’d always felt most comfortable close to nature, drawn to the grit, solitude and awe-inspiring beauty of the natural world and the adventures it had to offer. Years later, it was my love of horses and the great outdoors that compelled me to pick up a camera.

The town of Dubois, in Wyoming’s Fremont County.

While studying politics at a college in England, I learned about a remote guest ranch half an hour’s drive east of Dubois, Wyo., a small town with fewer than 1,000 permanent residents.

There, down the gravel East Fork Road, lies the Lazy L&B Ranch: a scattering of log cabins and horse corrals dotted among the cottonwood trees that line the bubbling East Fork River.

The entrance to the Lazy L&B Ranch.

In retrospect, the time I spent in Wyoming helped prepare me, years later, for the physical demands of working in a war zone. With over 90 horses to feed and take care of, ranch life was much tougher and more physically demanding than I’d anticipated. With few home comforts, I spent countless hours in the saddle, navigating vast mountains and high-altitude deserts, often in extreme weather.

Horses are pushed through a snowy forest towards a wilderness camp in Bear Basin.

But once I’d adapted to my role as a wrangler, I became extremely fond of ranch life and of the rugged, authentic cowboy culture that surrounds it — so much so that, for more than a decade, I returned to Wyoming almost every summer, and sometimes more often, exploring its diverse and dramatic natural beauty both on foot and in the saddle.

John Finley, a renowned artist and rancher, prepares to scrimshaw a knife handle while sitting at a desk in a corner of his log cabin, which he built himself.

My experience of working as a cowgirl was, of course, very different from the challenges and daily demands of America’s true cattle ranchers.

A stone’s throw from the Lazy L&B Ranch lies the Finley Ranch, a small traditional family-owned cattle ranch. Two generations ago, Duncan Finley traveled to the United States from Scotland, settling in the East Fork Valley of the Wind River. Today, Duncan’s grandson, John Finley, still lives on the family’s ranch, having left only once, to travel during military service — an experience that made him realize how wonderful the place he calls home is.

John Finley — followed by his dog, Strider — walks toward his log cabin on the Finley Ranch.

Once running 300 cattle, the Finley ranch has gradually been reduced in size since John was a boy. To generate income in the 1970s, the family sold off some of their land and the majority of their cattle, cutting the herd to around 30 head. In the 1990s, a decade-long drought plagued the area, which impacted grazing and led the family to further reduce their herd. Nowadays, John lives on the ranch with his wife, Ramona — or Monie, as she’s known — as well as four horses, 16 head of cattle and his energetic and fearless ranch dog Strider.

John has also become something of a local legend within the ranching communities near Dubois, particularly after his run-in with a grizzly bear in 2016. (His dogs, Strider and Merlin, helped save him — and the story seems to grow more dramatic with each telling.)

One of Mr. Finley’s western saddles, which he embossed by hand.

John is not only the embodiment of authentic Western culture, raising livestock and living off the land. He’s also a skilled and accomplished artist. From leather work and life-size bronze statues to intricate paintings on wasp-nest paper, scrimshaw and jewelry, his varied artistic creations reflect his unique talents and affinity with the natural world.

Guests at the Lazy L&B Ranch sit on a hay bale near the East Fork River.

Since my first visit in 2006, and with each visit thereafter, I’ve grown increasingly attached to Wyoming — to its people, culture, nature and, of course, its horses. It also holds a special place in my heart for sparking what has become my greatest passion: photography. It was there, near the iconic Teton Mountain Range, that I first took a serious interest in capturing images of my surroundings.

A view of the Grand Teton Mountains from inside the Cunningham Cabin in Grand Teton National Park.

While sitting on the porch after a long day in the saddle, drinking a cold beer, I showed Heath, the head wrangler, some of the photos I’d taken on my point-and-shoot camera. A man of few words, he nodded in approval and suggested I invest in a “real” camera. The rest, as they say, is history.

Claire Thomas is a British photographer and photojournalist who focuses on conflict, humanitarian and environmental crises and social issues. You can follow her work on Instagram and Twitter.