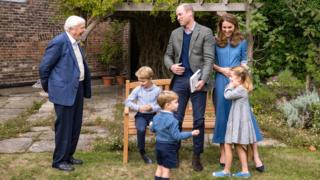 Sir David Attenborough has attended a private viewing of his new documentary at Kensington Palace, hosted by the Duke of Cambridge.

During his visit, the naturalist gave Prince George a fossilised giant tooth from an extinct shark.

The young prince looked captivated as he handled the tooth of a carcharocles megalodon, a shark that was once a sea predator.

Sir David and Prince William both campaign on environmental issues.

The event was held in the palace grounds to allow for social distancing.

William and the veteran broadcaster watched A Life On Our Planet, in which Sir David reflects on the defining moments of his life's work and the devastating changes he has witnessed.

Image copyright Kensington Palace Image caption The young prince was fascinated by the tooth, found by Sir David in the 1960s

Sir David, 94, chatted to the Duke and Duchess and their three children, Princes George and Louis, and Princess Charlotte, after the screening.

He was interviewed by Prince William at the World Economic Forum in Davos, Switzerland, in 2019, where he warned humanity needed to act fast to prevent parts of the natural world being annihilated.

The couple and Sir David have worked together on the environment - including on the Earthshot Prize, a cash reward for solutions to environmental problems. 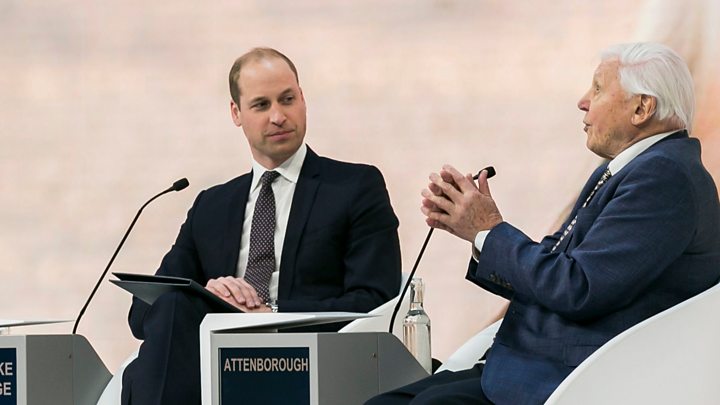 The giant shark tooth given to Prince George was found by Sir David during a family holiday to Malta in the late 1960s.

It was embedded in the island nation's soft yellow limestone, and is about 23 million years old.

Carcharocles megalodon is believed to have grown up to 15 metres in length, twice the length of the great white shark.

David Attenborough: A Life On Our Planet is released in cinemas on Monday and on Netflix on October 4.