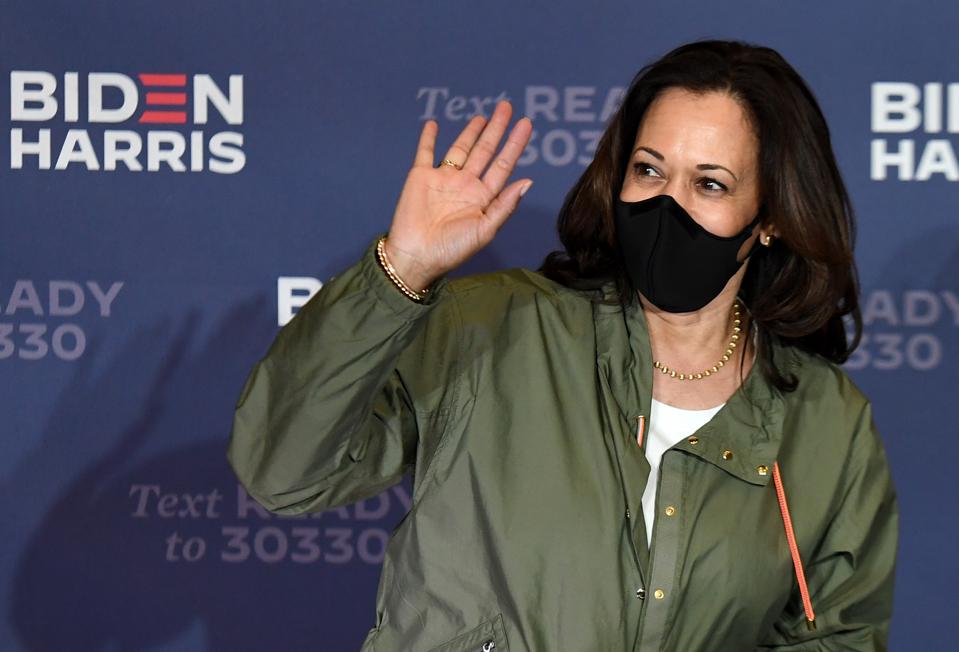 During Kamala Harris’s first visit to the swing state of Nevada since accepting the nomination for vice president, she made Hispanic voters her top priority. Harris held a 45-minute roundtable on COVID-19’s impact on the Latino community with five handpicked participants. Harris called their campaign a “fight for civil rights, equal rights, and dignity.”

The visit comes two days after President Trump’s visit to the state, where he held two large rallies and two “Latinos for Trump” business roundtables in the north and in Las Vegas. Nevada has the fifth-largest proportion of Hispanic people of any state - about 33 percent. Vegas, the quintessential tourist city, has been hit hard by the pandemic and economic shutdown, and has only recently begun a slow recovery.

Polls show a tightening race - here and nationally. The most recent Nevada poll, from the left-wing New York Times and Siena College, showed a diminishing four-point lead for Biden - within the margin of error. At stake are Nevada’s six electoral votes. 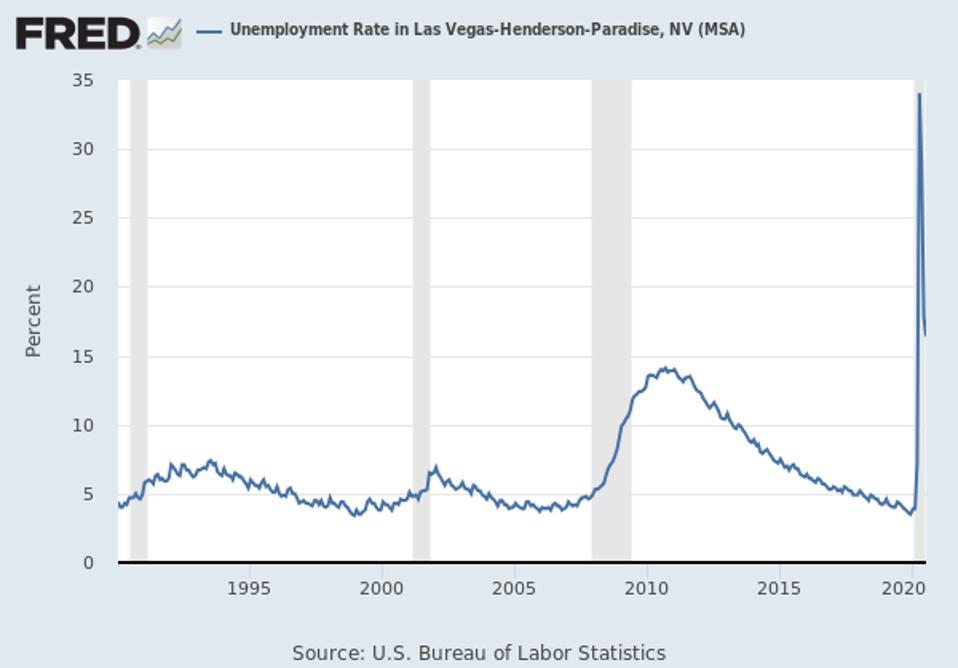 US Bureau of Labor Statistics

Harris’s visit comes as recent polls indicate the Biden ticket is underperforming Hillary Clinton’s and Barack Obama’s performances among Latino voters, while Trump outperforms Mitt Romney’s. In Florida, recent polling indicated that Trump was winning Hispanic voters outright. Nationally, polls by Pew, Quinnipiac University, and Emerson College show Trump getting 35 to 37 percent of the Hispanic vote, up from 28 percent in 2016 and the best for a Republican since George W. Bush in 2004.

The polls have alarmed some Democrats. Some worry Biden, who has mostly campaigned virtually from his home in Delaware, has taken the Latino vote for granted in swing states like Florida, Arizona, Texas, and Arizona. Biden hasn’t visited Nevada since securing the nomination.

“Nobody’s talking to them,” said Democratic strategist Chuck Rocha. “Everybody is extremely worried. Like, we’re even worried about Nevada now, which is supposed to be this easy state that everybody thought we were going to win.”

While Nevada has voted Democrat in presidential elections since 2004, Clinton beat Trump here by only a little more than 2 percent. The Democrats’ main advantage, an in-person get out the vote operation led by large unions, has been forced to go virtual during the pandemic. And Nevada, a state with strong libertarian and independent traditions, has a bipartisan history of electing governors, congresspeople, and senators.

Recent events have drawn increasing attention to the claim, made by the Trump Campaign and others, that Biden may have diminished cognitive capacity and the Harris is the president-in-waiting. On Saturday, Harris referred to a “Harris administration together with Joe Biden” during a short virtual talk with Latino business leaders in Arizona, before correcting herself. Then on Tuesday, Biden himself referred to a “Harris-Biden” administration while speaking from a teleprompter during a veterans roundtable. He then mixed up Iran and Iraq - Iraq being where then-Senator Biden voted for war. Many question whether Biden has been relying on teleprompters and canned questions for interviews. His spokesman TJ Ducklo refused to answer the question on Fox News, and shortly after a video surfaced that appears to show a reflected teleprompter during an interview with James Corden. 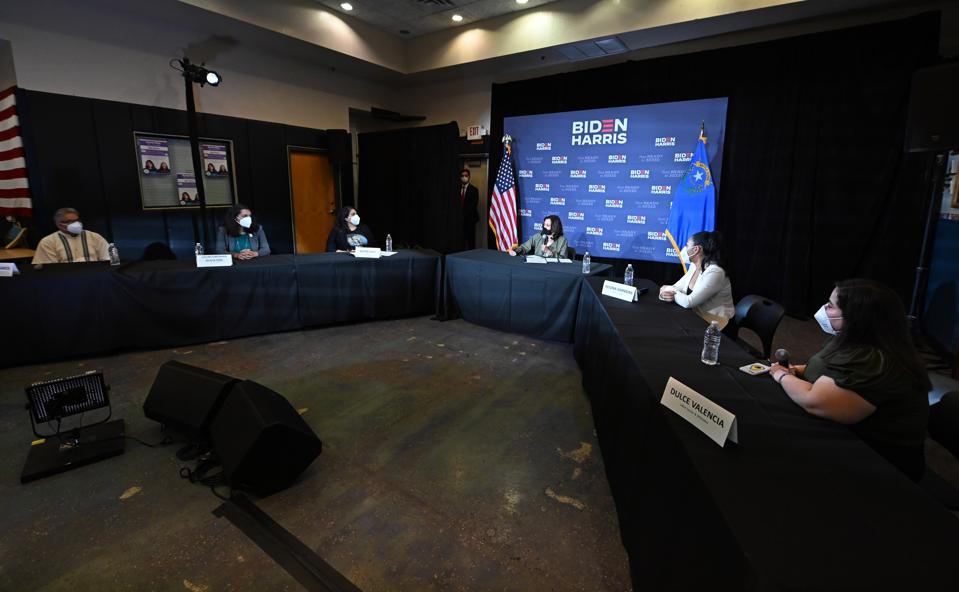 At the Vegas roundtable, Harris mentioned a “pathway to citizenship” for DREAMers. But she didn’t address her refusal, as a senator, to accept Trump’s offers to negotiate immigration reform.

“The strength of a leader is defined by who you lift up,” Harris said, and accused Trump of “sowing hate and division in our country.” But Harris didn’t mention the months of protests, riots or police shootings once. Nor did she mention her support of the Minnesota Freedom Fund. The fund bailed out a number of protesters involved in riots, including several charged with shooting guns at police, rape, and murder. And she didn’t mention that Black Lives Matter, which a Princeton University found involved in hundreds of riots around the US, processes its donations through Democrat service ActBlue.

Nor did she mention her support of sanctuary cities while district attorney in San Francisco and attorney general of California. A number of those involved in violent crimes were neither deported nor prosecuted, and went on to murder innocent people.

While The New York Times describes Harris as a “pragmatic moderate,” columnist Debra J. Saunders calls her a “progressive opportunist.” Liberal advoacy group Americans for Democratic Action gave her a perfect score, and GovTrack rated her voting record the most left-wing or “progressive” in the Senate.

Harris told the roundtable that Trump is “putting babies in cages” and said Biden will end that. But she didn’t mention the harsh border detention policies started, not ended, during the border crisis that began during the Obama-Biden administration. She denounced new border walls, although they have reduced illegal crossings - and casualties - dramatically.

“Vote early - it really matters,” Harris said, claiming Trump is creating obstacles to voting. “He knows when people vote, things change.” Harris didn’t mention Biden has been in office the past 47 years, including eight as vice president, while the presidency is Trump’s first foray into public office.

The Real Clear Politics (RCP) average of national polls for September 16 has Biden leading Trump by six points. But Rasmussen Reports, who has warned that polls showing a stronger Trump have been suppressed from the RCP average, shows only a 48-46 Biden lead - a statistical dead heat. And a recent poll by the Democracy Institute, which correctly forecast Trump’s election and Brexit in 2016, showed Trump leading 48-45 overall, and 49-42 in battleground states. It measured Trump’s Latino support at 39 percent. 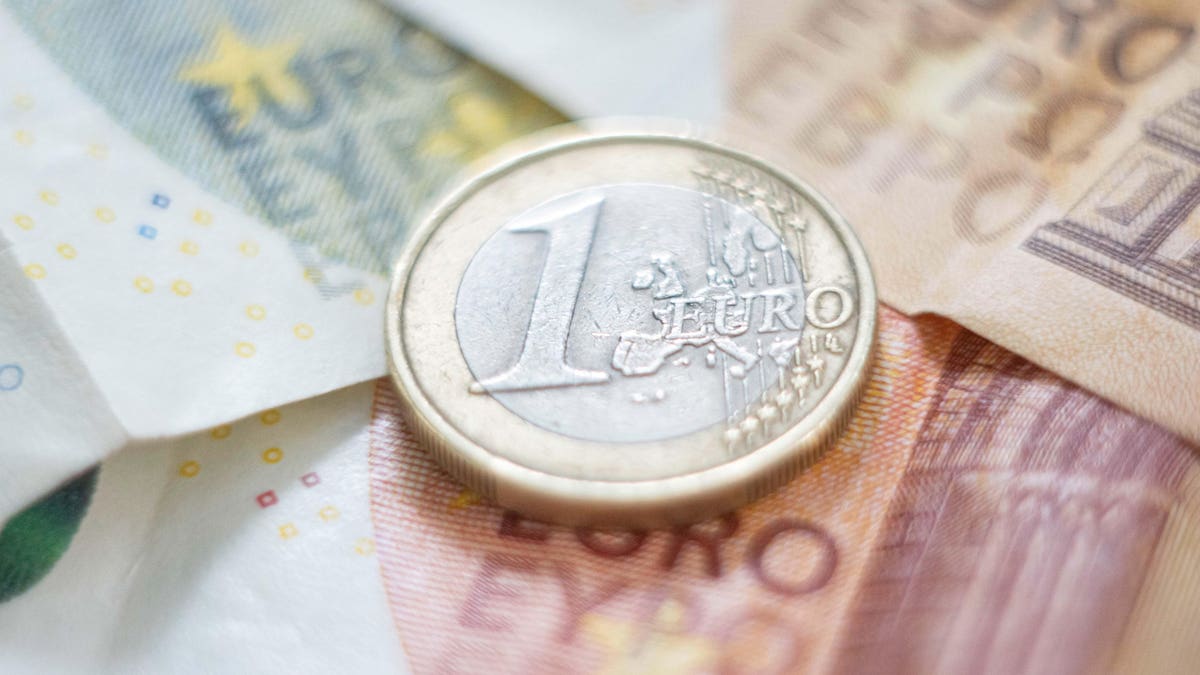