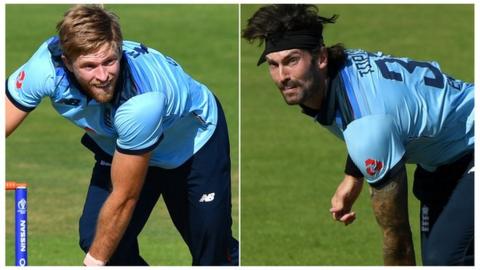 Left-arm seamers David Willey and Reece Topley have been named in England's 14-man squad for the three one-day internationals against Ireland.

Willey last played for England in May 2019 before being left of their World Cup squad, while Topley, who has struggled with stress fractures, has not featured since February 2016.

The series begins on Thursday.

England are without World Cup winners Ben Stokes, Chris Woakes, Joe Root, Jofra Archer, Jos Buttler and Mark Wood as they prepare for the three-Test series against Pakistan that starts on 5 August.

All-rounder Moeen Ali will be vice-captain in Buttler's absence and Paul Collingwood will be charge of the team with head coach Chris Silverwood also concentrating on Test cricket.

The series will see the launch of the ICC Men's Cricket World Cup Super League which will determine qualification for the 2023 World Cup, with the top seven teams automatically booking their spot at the tournament in India.