The Best iPhone Sniper Games for Sharpshooters and Hardcore Campers 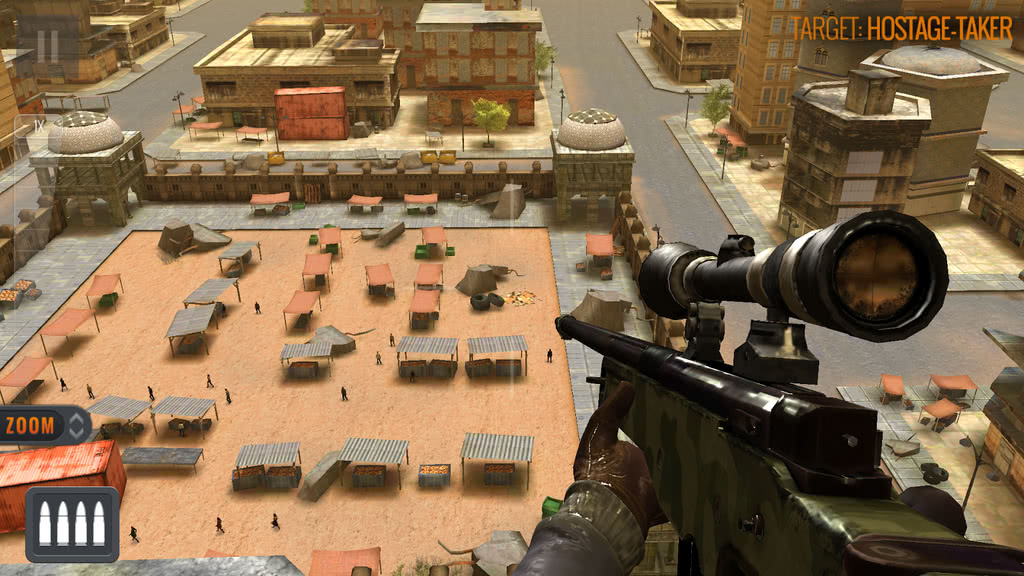 There’s something undeniably cool about snipers. They roam battlefields like ghosts, taking out hostiles from dizzying distances, constantly moving from one location to another so that they remain unseen, unheard, and unfound. To partially paraphrase Liam Neeson’s famous I-will-find-you-and-I-will-kill-you speech from Taken, becoming a sniper requires a very particular set of skills that not many people possess, which in turn means that the unbelievable feats of the best battlefield sharpshooters will forever be etched into military lore. Speaking of movies, the stories of some GOAT snipers have been immortalized in critically acclaimed pieces of cinematic art, with Enemy at the Gates and Clint Eastwood’s Academy Award-nominated American Sniper being a pair of prime examples. The least bit surprisingly, snipers are also present in the virtual realm of shooting games, as some gamers have a natural-born propensity for camping, which is still frowned upon by many as an act breaking the code of gamer ethics. Regardless, the overwhelming majority have gotten used to the presence of snipers – the more so because it’s really satisfying when you finally find the nest of a sharpshooter and put an end to their long-distance killing with a well-placed headshot. In case you’re a sniper, and you’re tired of feeling like a pariah when you’re playing online, you’ll love these snipers-only iPhone games. This sniping installment of the Call of Mini-series brings you brutally cute first-person survival action with brain-thirsty zombies, huge explosions (which you shouldn’t look an if you consider yourself cool), and powerful guns. According to Call of Mini Sniper’s B-movie-worthy story, an up-to-no-good evil corporation has been testing bioweapons in the serene mountains, but something went horrible wrong, unleashing the zombie apocalypse. You play as Rod, the sheriff of Muerte Vista, and with the aid of some much-needed SWAT backup and 21 lethal weapons, you have to take out as many zombies as you can and survive as long as you can to protect a handful of survivors and save the world one headshot at a time. Become a lethal, sharpshooting master assassin in Contract Killer: Sniper, and take out the cyborgs and mechanized combat units of a secret (and, of course, evil) military organization striving for world domination, and ultimately put an end to the global robot invasion and to the nefarious cybernetic augmentation project. Contract Killer: Sniper features more than 250 missions and campaigns taking you around the world in which you can choose your contracts according to your appetite for destruction – meaning you can take out enemy squads, destroy entire bases, or choose the path of the silent assassin and only eliminate a single target. At your disposal to honor your contracts is an arsenal of upgradable and customizable weapons and equipment, and if you’d like to test your sharpshooting prowess against other snipers, you can go into battle for PvP supremacy and assault the bases of other players to steal their resources. The baldest and most famous assassin in the world takes his lethal skills and his back-of-the-head barcode tattoo to this campers’ paradise sniper game bringing you the most captivating sharpshooting adventure on iPhone. Set in scenic and equally dangerous Montenegro, Hitman Sniper’s campaign is made up of more than 150 missions and 11 different contracts during which you have to master the art of killing and experiment with different tactics (and weapons) to take out your targets. Since no shooting game is complete without a healthy dose of undead-killing, you can boost your accuracy and speed in an action-packed zombie-butchering challenge set in the tellingly named Death Valley. A classic iPhone sniper game that stood the test of time and remained immensely playable to this day. The protagonist in Clear Vision is Tyler, an ordinary stick figure guy who’s far from having a six figure net worth – especially because he’s just been fired from his job as a supermarket cleaner. Fed up from the injustices of life, he makes an extreme career change and starts operating as a professional hitman, stepping on a treacherous path paved with false friends, deception, and plenty of violence. Snipe your way through 25 missions, marvel at brutally bloody and gory animations and animated cut scenes, go for the knockout in underground boxing matches, and make sure you always score a headshot with your first bullet. A cold-blooded assassin in a cold place. In this sharpshooting arctic adventure, you step into the cold-proof military boots of sniper legend Glous Miller to (political correctness ahead!) join powers with an immensely decorative young lady to save the world and to avoid going to prison. ISniper 3D Arctic Warfare features an adrenaline-boosting cinematic story with thrilling first-person action, superbly realistic character progression, 10 upgradable weapons, jaw-dropping 3D environments, 11 unique enemies with great AI, and an Endless mode perfect for killing time. Boasting a 5-star rating based on more than 350 thousand votes, Sniper 3D Assassin: Shoot to Kill Game For Free captured the hearts of millions of snipers worldwide despite the seldom welcome fact that progressing in the game requires you to make in-app purchases. Sniper 3D Assassin is pretty strong in the numbers department not only in terms of the aforementioned 5-star rating, but also regarding the number of missions and the size of the weaponry at your disposal, as both are in the hundreds. During Sniper 3D Assassin’s action-packed missions, you have to clean 13 wonderfully detailed cities from terrorists by offering your sharpshooting services to the police and the army. The game also has, in its sniper rifle case, limited time events during which you have to kill as many zombies and robots as you can (and as the available time allows) to earn awesome rewards and to prevent the outbreak of World War III – though we both know that the exclusive rewards are much more enticing than world peace. What’s with iPhone sniper games and these mile-long titles? Anyway, Sniper Fury: Best Mobile Shooter Game – Fun & Free is set in a grim near-future parallel universe on the brink collapse. The final battle against the forces of evil is raging all over the globe, and your sharpshooting skills are badly needed to overcome violent villains and restore peace. Sniper Fury packs more than 130 missions that take you around the world to a wide variety of locations from ultramodern skyscrapers to deserts and jungles. Thanks to spectacular 3D graphics, next-gen bullet time effects for each headshot, and realistic atmospheric effects including blizzards, sandstorms, and rainstorms, Sniper Fury delivers an all-around awe-inspiring visual experience. As you’d expect, you can get your hands on all sorts of weapons such as assault rifles, sniper rifles, railguns, and even futuristic top-secret superweapons, and gather different components to upgrade and customize your evil forces-decimating arsenal. To top it off, Sniper Fury brings you a capture-the-flag-like PvP challenge in which you have to steal resources from opposing players by breaking down their defenses, and all the while make your squad strong enough to be able to defend the resources you’ve stolen. Kill Shot is a first-person sniper marathon in 3D featuring a staggering amount of missions – more than 1,000, to be as on point as the legendary Chris Kyle was with his kill shots – and 50 unique maps and locations. According to Kill Shot’s story, you are a covert special ops soldier tasked with silent assassin missions taking you deep behind enemy lines where you have to locate and eliminate evildoing targets. Choose from over 100 weapons covering 4 weapon classes, score weapon upgrades to increase your accuracy and firepower, and get ahold of ability-boosting power-ups to easily spot enemies, to slow down time, and the load your rifle with armor-piercing bullets. If Last Hope – Zombie Sniper 3D followed the trend set by undead-free sniper games, it would include a mini-game entitled “Living Apocalypse – Survival Mode” – but it does not, and we’re completely fine with that as the game is good as it is. Last Hope is set in a dystopian future where zombies have completely taken over the world. As you solitarily traverse through the cold and uncompromising desert, exploring abandoned small towns and creepy canyons, your objective is not simply decimating the undead in order to survive, but also investigating the reasons behind humanity’s climactic downfall. Last Hope – Zombie Sniper 3D makes the most out of the zombie-sniping experience with manifold locations, heaps of game modes and goals, unlockable skills, talents, and items, upgradable weapons, different zombie types, and a fair share of brain-splattering headshots. In the third, final, and most recent installment of the Clear Vision-saga for iPhone, Tyler, our favorite mass-murdering stick figure has made his dream come true, and is now living the good life, taking out targets by day as a hitman, then becoming a loving and seemingly completely average family man the moment he gets home and puts away his sniper rifle. Unfortunately, someone is after Tyler, threatening to shred the life he has literally killed for into pieces the way Tyler’s bullets shred the skulls of his targets into a disgusting blend of bone fragments and brains. Clear Vision 3 features an exciting storyline covering 55 sharpshooting missions, gory scenes, customizable weapons, and an all-around awesome game world.