In Texas, pandemic worries are colliding with hurricane fears. 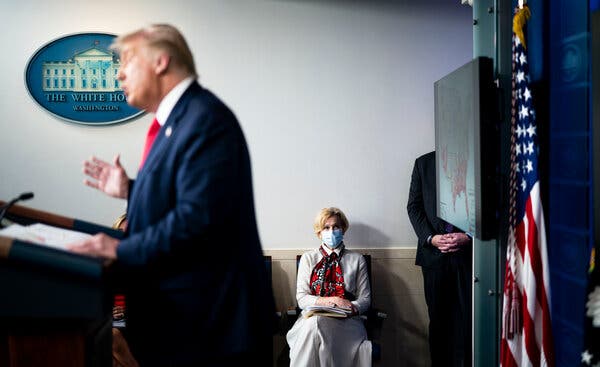 With Kentucky officials set to announce stricter measures on Monday to contain the coronavirus, a top federal health official suggested that the leaders of nearby states should take a hard look at doing the same.

On a visit to Kentucky on Sunday, Dr. Deborah L. Birx, the Trump administration’s coronavirus response coordinator, said several states in the region should reinstate bar closures and restrictions on public gatherings to quell the rise of infections.

Several states in the South and Midwest are facing the prospect of shutting down parts of their economy again to try to stem the virus, which the Trump administration and many governors have increasingly been forced to recognize as unrelenting.

Florida has surpassed New York, an early epicenter of the pandemic in the United States, in the number of cases, and four states have set single-day records for infections: Louisiana, Tennessee, Oklahoma and Alaska.

On her visit to Kentucky, Dr. Birx cited as worrisome not just that state but also Indiana, Ohio, Tennessee and Virginia. She said the federal health authorities were concerned about the percentage of people who were testing positive for the virus, as well as the total number of cases.

Dr. Birx appeared with Gov. Andy Beshear of Kentucky, a Democrat, who said that the state would announce new guidelines on Monday to address the rise in cases.

“I want you to know that the White House and Kentucky state government are in complete agreement that the escalation of cases is going to require us to take some new steps,” Mr. Beshear said.

In Florida, cases have surged this month. Over the past week, there have been an average of about 10,500 cases per day, an increase of about 19 percent from the average two weeks earlier, according to a New York Times database. There have been at least 5,853 deaths in Florida since the beginning of the pandemic.

And despite increased testing capacity across the nation, there is a consensus among federal state and local officials that test results are taking too long.

The federal government said Sunday that it would pay the testing company Hologic up to $7.6 million to expand the number of tests its machines can run by two million a month. The expanded capacity won’t be available until next January.

Testing is considered crucial to understanding — and slowing — the spread of the virus. When turnaround times extend beyond several days, it can render the information useless, since those tested may have spread the virus to other people by the time their results are back.

How do you keep people safe from a pandemic when a hurricane is bearing down?

City employees worked on Sunday to drain a road flooded by Hurricane Hanna in the North Beach area of Corpus Christi, Texas.Credit...Tamir Kalifa for The New York Times

As Hurricane Hanna began to slam the coast of Texas coast over the weekend, some Texans were forced to balance one threat against another. To avoid possible injury or death in the storm, they had to risk infection from the coronavirus.

In ordinary times, if a big storm is approaching, city officials will ask people in seaside and flood-prone areas to evacuate and seek shelter with relatives or in emergency shelters — places where people share bathrooms and tight quarters.

But fear of contagion has thrown old protocols out the window.

“When I saw that the hurricane was headed our way, I thought, ‘We have enough problems,’” said the mayor of Corpus Christi, Joe McComb.

Hanna has not displaced many people, as hurricanes go, and that made things a little easier. The relatively low-stakes storm allowed officials to assess how to help people evacuate safely while diminishing the spread of the virus.

But some still faced tough decisions, among them Bartt Howe, a 49-year-old Texan whose boat was his refuge from the pandemic.

Battling diabetes and H.I.V., he knew that catching the virus could kill him, so he had been living alone on the docked boat for three months.

“I had managed to stay safe all this time, but the storm kicked me out of my boat,” Mr. Howe said. “Now here I am, back on land, on borrowed time.”

Vietnam evacuates tourists after its first cases in months.

Everyone who is evacuated will be required to go isolation for 14 days, and their health will be closely monitored, officials said Monday.

The strain of the virus found in Danang is different from five strains detected earlier in the county and spreads more rapidly than the others, they said.

Dozens of flights have been added, but the evacuation is expected to take at least four days. The evacuees are mostly local tourists; Vietnam remains closed to incoming foreign tourists.

Health officials began expanded screening and testing in Danang, a popular tourist destination, after a 57-year-old man tested positive for the fourth time on Saturday, the government said. The infections of three additional people on Sunday, including a 61-year-old man requiring a ventilator, prompted the evacuation.

Officials said it was unclear whether all four patients had the same source of infection.

Vietnam has been among the world’s most successful countries in containing the virus. It closed down international borders early in the crisis, called for widespread use of masks, and rapidly began strict quarantine and contact-tracing measures. There have been 420 cases and no deaths, according to a New York Times database.

But the case of the 57-year-old-man, who had not traveled outside Danang and rarely left home in the previous month, alarmed Vietnam’s residents, who are being asked to wear masks again after becoming more lax in recent months.

Several countries that had the virus under control have had to sharpen their response after a sudden uptick in cases. In June, China reimposed restrictions in Beijing after a flare-up ended a 56-day run of no locally transmitted cases. Officials in Australia locked down much of Melbourne in early July after restrictions had been eased for months. But Japan has shied away from new restrictions even as cases broke records last week.

In other news from around the world:

Often criticized for a slow response to the coronavirus, the government in Britain moved quickly this weekend to impose a 14-day quarantine on anyone arriving from Spain, after a spike in coronavirus cases there. The rapid move brought disarray to thousands of Britons, blindsiding those already traveling and embarrassing Britain’s transportation secretary, Grant Shapps, who is responsible for aviation policy but learned of the quarantine while on vacation. In Spain.

Officials in Hong Kong, which reported a record 145 new cases on Monday and has had more than 100 new cases for six days in a row, said on Monday that they would shut down all dine-in restaurant service, limit public gatherings to two people and require masks in public at all times. Hong Kong is coping with its worst outbreak yet after having the virus largely under control from mid-April to July.

Hoping to understand the virus, everyone is parsing a mountain of data.

National Guard medics tested a family for the coronavirus in Galt, Calif., on Thursday.Credit...Max Whittaker for The New York Times

The latest count of new coronavirus cases was jarring: Some 1,500 virus cases were identified three consecutive days last week in Illinois, and fears of a resurgence in the state even led the mayor of Chicago to shut down bars all over town on Friday.

But at the same moment, there were other, hopeful data points that seemed to tell a different story entirely. Deaths from the virus statewide are one-tenth what they were at their peak in May. And the positivity rate of new coronavirus tests in Illinois is about half that of neighboring states.

“There are so many numbers flying around,” said Dr. Allison Arwady, the commissioner of the Chicago health department. “It’s hard for people to know what’s the most important thing to follow.”

Six months since the first cases were detected in the United States, more people have been infected by far than in any other country, and the daily rundown of national numbers on Friday was a reminder of a mounting emergency: more than 73,500 new cases, 1,100 deaths and 939,838 tests, as well as 59,670 people currently hospitalized for the virus.

Americans now have access to an expanding set of data to help them interpret the coronavirus pandemic. Sophisticated data-gathering operations by newspapers, research universities and volunteers have sprung up in response to the pandemic, monitoring and collecting coronavirus metrics around the clock.

“Everybody’s tracking this virus in a way that they’ve never done with any other infectious disease,” said Dr. Amesh A. Adalja, a physician and senior scholar at the Johns Hopkins Center for Health Security who has treated coronavirus patients. “For some people, it’s helped them understand what is happening. For other people, it’s been misinterpreted and not very helpful.”

North Korea accused a defector of bringing in the coronavirus.

North Korea’s leader has placed Kaesong, a city of 300,000 on the border with South Korea, under total lockdown.Credit...Naohiko Hatta/Kyodo News, via Associated Press

After North Korea on Sunday accused a man of secretly crossing into the country from South Korea and bringing the coronavirus with him, Seoul went in search of any defectors ​in ​the South who were missing.

By Monday, South Korean officials had zeroed in on a 24-year-old man, identified only by his family name, Kim, who in 2017 swam across the western inter-Korea border to defect to the South. On July 19, he swam back across the border into Kaesong in the North, they said.

It was not immediately clear why the defector had crossed. The South Korean news agency Yonhap reported that the man had been wanted by the South Korean police for questioning after a rape accusation.

North Korea said on Sunday that the North Korean man was “suspected to have been infected with the vicious virus” and could be the country’s first virus case. And the reverse defection prompted the North’s leader, Kim Jong-un, to order a total lockdown of Kaesong, a border city of 300,000, and declare a “maximum” national emergency.

Until Sunday, North Korea had ​repeatedly ​said that it had no Covid-19 cases. The claim was questioned by outside experts.

South Korea officials could not say whether the man might have ​carried the coronavirus across the border.

They survived wars, recessions, disasters. But not the pandemic.

Before the pandemic, Record Mart was a fixture of the Times Square subway station for more than 60 years, known for carrying vinyl recordings of Latin and jazz music.

Lou Moskowitz left his job in real estate in 2006 to work full time at the shop, which was owned by his father. Sales at independent record stores were on the decline nationwide, and many were shutting down throughout New York. Mr. Moskowitz’s friends questioned his move.

After his father died in 2012, Mr. Moskowitz took over the business. For years, Record Mart survived by selling electronics and headphones and drawing in passers-by to explore its extensive vinyl collection. The shop was not thriving, but revenue trickled in.

Then coronavirus cases and hospitalizations rose in New York, and more than 90 percent of the city’s subway ridership disappeared. That was “the final nail in the coffin,” Mr. Moskowitz said. He weighed the shop’s future for two months before closing it permanently in June.

Restaurants, barbershops and small shops have closed across the city, and for some New Yorkers, the near-weekly closures of neighborhood mainstays have ushered in a type of mourning.

“It’s been this long, drawn-out loss, and it’s a lot to take in emotionally,” said Jeremiah Moss, the author of “Vanishing New York: How a Great City Lost Its Soul,” a book about gentrification.

Mr. Moss said he recently rode by a Manhattan theater and suddenly began wondering if it, too, would disappear soon. “And then I pushed it aside,’ he said, ”because it’s just too much right now. It’s overwhelming.”