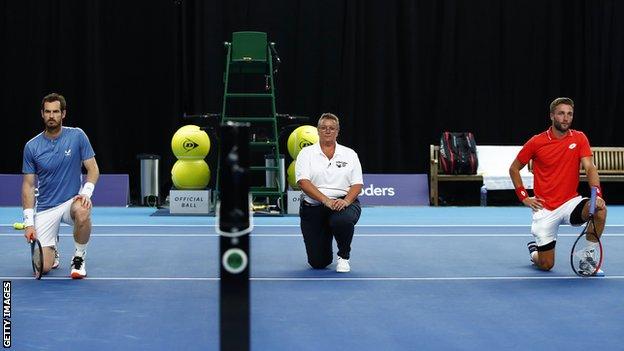 Before each Battle of the Brits match, the players and umpire took a knee in support of racial equality

Andy Murray began his latest comeback from injury with victory over Liam Broady in the Battle of the Brits exhibition held behind closed doors.

Before his first match in seven months, the 33-year-old Scot played down his chances in Roehampton as he continues to recover from a bruised pelvic bone.

But the three-time Grand Slam champion was relatively sharp and mobile after such a long absence to win 6-2 6-2.

"I moved OK but I find it quite tricky here, the courts are tight," he said.

"It was all right for the first match in seven months. I served pretty well, but I didn't hit the ball that well."

The former world number one, now ranked 129th, was playing for the first time since winning Great Britain's opening match at the Davis Cup finals in November.

He missed the rest of the tournament with the pelvic injury, which he described in February as "unbelievably complex, challenging and difficult".

Murray said these matches at the National Tennis Centre in Roehampton would be where he "found out" where the injury was at and he passed his opening test with a comfortable win over world number 211 Broady.

After breaking to love in the first game, Murray was pegged back at 2-2 before reasserting his control in a dominant opening set.

Working out his fitness level was Murray's primary concern, although he was not completely happy with his game - saying he was not hitting the ball as cleanly as he would like - even when he led by a set and a break.

There were glimpses of his best, however, including a sublime flicked backhand from the baseline on his way to finally taking a 5-2 lead in a 13-minute game where he needed seven break points.

Murray sealed victory with a hold to love in the next game, finishing with an ace and roaring 'Come on!' as he clenched his first in celebration.

Novak Djokovic tests positive for coronavirusAndy Murray column: Biking around Box Hill, playing the US Open & Battle of the Brits

No fans, players collecting their own balls & in-match interviews

The six-day charity event, organised by Jamie Murray, is following strict safety measures at the National Tennis Centre in Roehampton.

As well as no fans, there are no ball kids or line judges in order to minimise numbers on court for social distancing purposes, meaning players had to retrieve their own balls and fetch their own towels.

The umpire is assisted by Hawk-Eye cameras instead of line judges, while the players did not change ends. 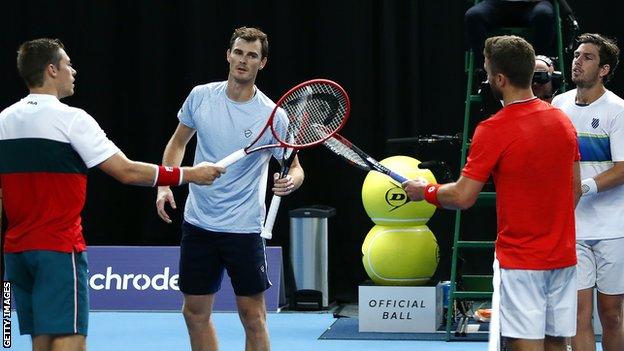 The players followed social distancing measures throughout the match, including replacing the traditional post-match handshakes with racquet taps 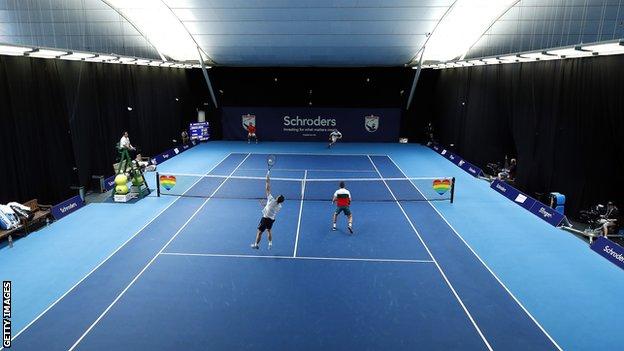 Only the players, umpire James Keothavong, the coaches and camera operators were allowed on court 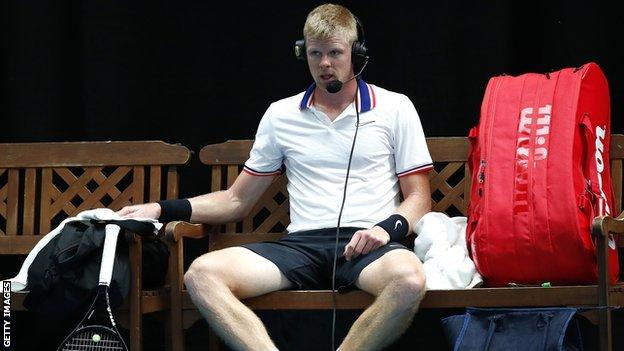 Another innovative feature saw the players - as illustrated by Kyle Edmund - putting on headphones and microphones at changeovers, providing in-match thoughts to the television commentators

The tournament, featuring singles and doubles, gives top British men's players competition practice before the planned restart of the professional tour in August and will also raise £100,000 for NHS Charities Together.

The eight singles players have been split into two groups, with the semi-finals and final to be played at the end of the week.

In the doubles, two groups of three play each other in a round-robin and the top two from each group will advance to the semi-finals.

In the opening match of the tournament, Jamie Murray and Neal Skupski suffered a shock defeat by Liam Broady and Cameron Norrie.

Regular doubles pairing Murray and Skupski, who reached the US Open semi-finalists last year, took the first set against the singles players after securing an early break.

Teenager Jack Draper, who was the runner-up in the 2018 Wimbledon juniors, pulled out of the tournament with an abdominal injury.

The 18-year-old has been replaced by 24-year-old Ryan Peniston in the singles and by Ward in the doubles.

'I was awful' - Andy Murray on his rap song, James Bond & being a hardcore gamer

Preview the latest must-see show: I May Destroy YouThe drama everyone is watching: The Salisbury Poisonings

InCred kicks off talks to merge with KKR’s NBFC