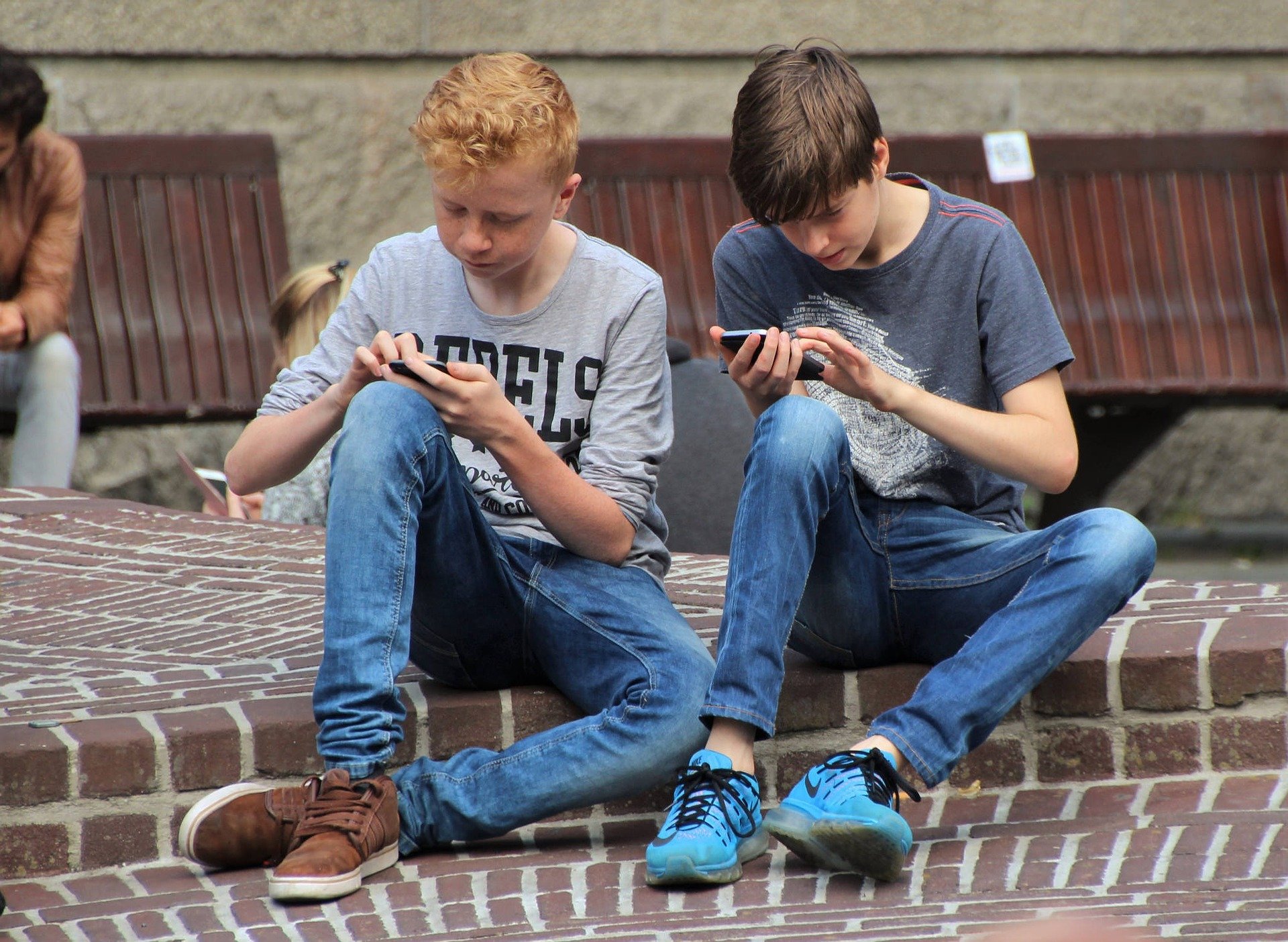 Colony Battle is a new mobile real-time strategy game for iOS and Android. The game is made up of increasingly difficult levels with the goal of conquering enemy colonies. Bigger colonies grow ants faster, so strategic decisions need to be made in order to be successful.

There are three major game modes in Colony Battle. 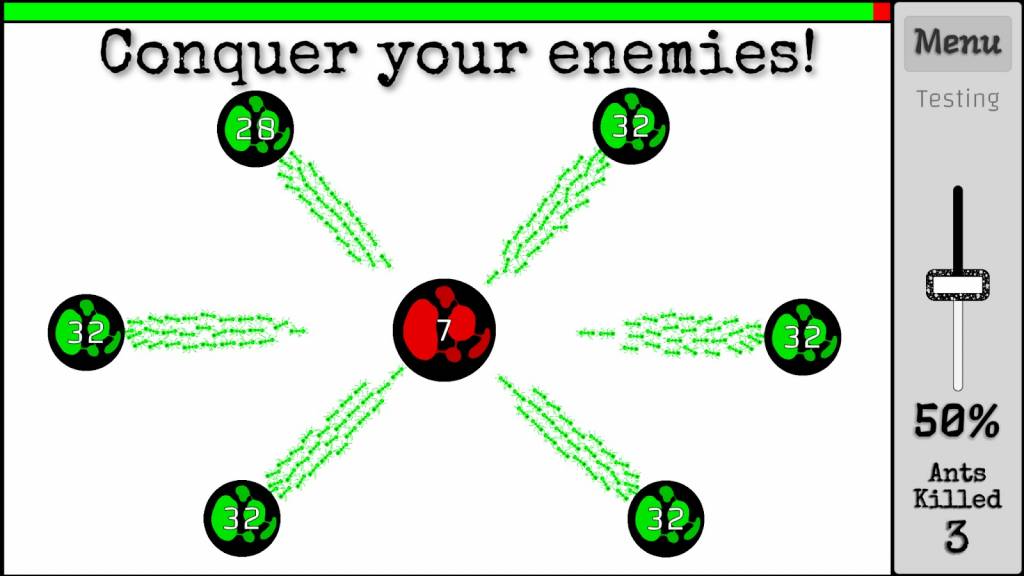 There are 40 original levels — plus 20 more in a very recent update — and each one challenges the player in a new way. As the game progresses, players discover colonies with special abilities. These abilities change overall game strategy quickly and significantly. Fans of other strategy games will appreciate this feature.

For example, Fire Ant colonies send out ants that do double damage to enemies. Armored Ants are invincible. If the player does not utilize these colonies correctly, they will have a tough time beating the level. Each level also rewards the player with a bronze, silver, or gold medal depending on their completion time. This adds a lot of replayability as winning some gold medals can be pretty tricky.

Additionally, as the game progresses, players unlock new bug types like spiders, centipedes, and bees. Combined with a variety of color palettes to choose from, the player has a lot of choice in the aesthetics of the game. Overall, these 60 levels introduce new concepts and abilities at a reasonable pace, keeping the gameplay fun, fresh, and satisfying. 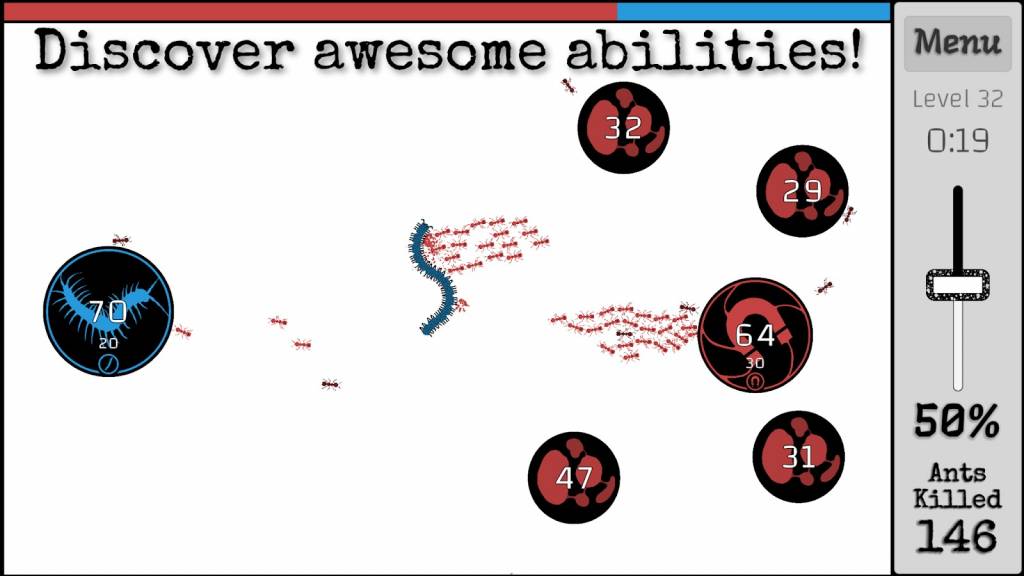 Colony Battle also features an intuitive Level Creator. Anybody can whip up a new level by placing colonies and adjusting their size, starting value, and special ability. There is a database storing levels that users choose to submit. Anybody can play them as soon as they are uploaded.

User levels can only be uploaded if the creator completes them successfully. If a challenger beats the level, they can leave a 1-5 star review. User levels are all sorted based on player ratings. It’s fun for a player to see their level chart among the most popular. If a user has earned all gold medals, they receive a special frame on their user level for everyone to see.

If 60 levels — and a growing number of user levels — isn’t enough, Arcade Mode features an infinite amount of randomly generated levels. These levels contain colonies with special abilities and features between one and seven enemies, just like the other game modes. The game also keeps track of the player’s current and highest streaks, so they can try to beat their high score. Some generated levels are pretty easy while others are basically impossible. As you might expect, improvements are being made to the procedural system. 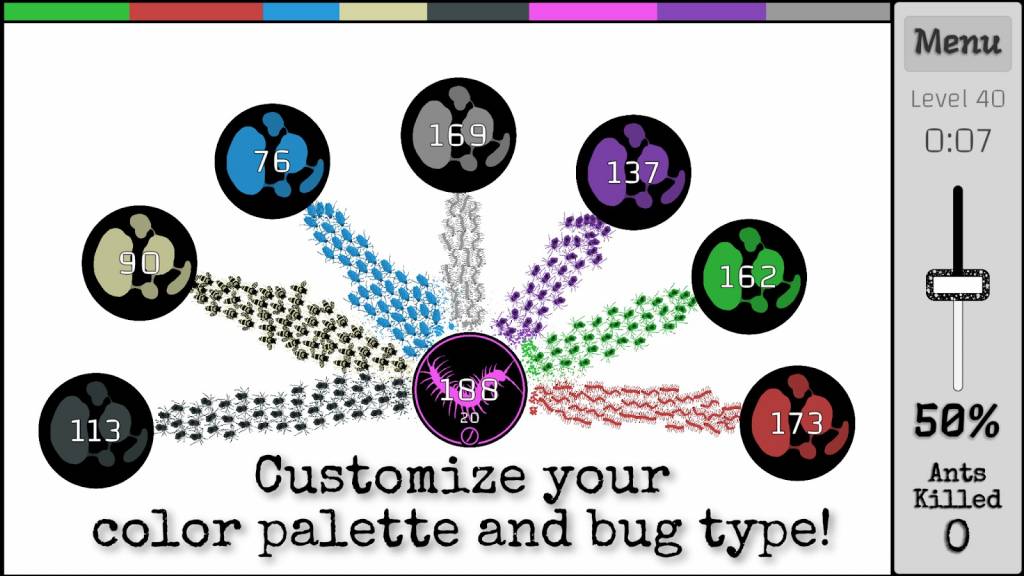 Colony Battle only shows ads when users restart a level. This means it is possible to beat the game without seeing a single ad. Additionally, it’s impossible to see more than one ad in a two-minute span. There are no microtransactions. This means that all of the gameplay, skins, and colors are completely free.

Overall, Colony Battle is a fun, fresh take on the genre, and the addition of special abilities and the level creator make this game unique. Considering the game is completely free, it’s well worth giving it a try. More updates are on the way, so players can look forward to the continued development of this game.