‘Dopesick’ Uses Drama, and Michael Keaton, to Give the Opioid Crisis a Human Face

Based on the book by Beth Macy, the new Hulu series roams the hills of Appalachia and the boardrooms of Purdue Pharma to tell a story of greed and suffering. 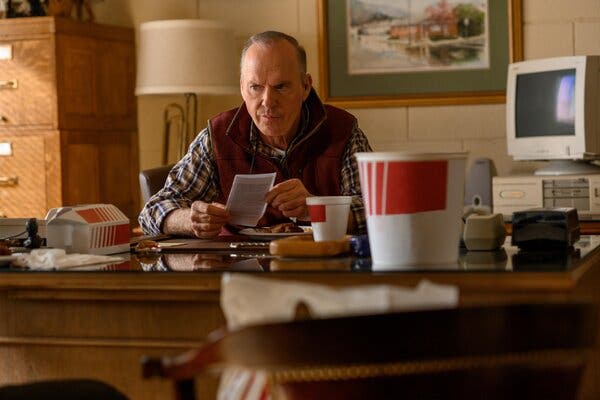 Michael Keaton stars in “Dopesick” as a doctor who watches as the OxyContin he was manipulated into prescribing ravages his small Appalachian town.Credit...Antony Platt/Hulu

Sitting on your couch, remote in hand, you could select a drama about a bullying, obscenely affluent family that is riven by internal strife but revels in asserting its wealth and power, even if people die. Or you can watch “Succession.”

Unlike that HBO show, Hulu’s new eight-part series “Dopesick” doesn’t offer laughs at the outlandish behavior of its titans of industry. But the bigger distinction is that “Dopesick,” while a scripted drama, is about a real-life family’s alleged role in creating one of the biggest public health catastrophes in American history: the opioid crisis.

Based largely on the 2018 book by Beth Macy, the show seeks to dramatize how members of the Sackler family and their company Purdue Pharma, aided by lax regulations, pushed OxyContin onto the public starting in the 1990s. OxyContin’s introduction is now viewed as the start of the opioid epidemic, which has killed more than 500,000 people nationwide and addicted millions more.

The Sacklers say they bear no responsibility for the crisis and are likely never to face trial, owing to the sweeping protections built into a bankruptcy settlement that dissolved Purdue Pharma last month. That settlement made the timing of the new series all the more important to its producers.

“This series is the trial that should have happened,” said Danny Strong (“Empire”), who created and oversaw the show, which debuted Wednesday. “What takes the story to a profound place is that it is about the dark side of American capitalism, where you have the collusion of government and industry.”

“Dopesick” stands apart from a growing list of high-profile books and documentaries about the crisis, including a recent four-hour HBO documentary, “The Crime of the Century,” by Alex Gibney, based partly on leaks from a 120-page Justice Department report from 2006 that was kept confidential as the department pushed to settle with Purdue in 2007. (Purdue pleaded guilty then to a felony charge of “misbranding” OxyContin; three of the company’s executives each pleaded guilty to a related misdemeanor.)

The new series, which counts Barry Levinson (“Diner,” “Rain Man”) among its directors, picks up, in a sense, where that documentary leaves off; using the freedom of scripted television, it ventures inside the four-year investigation behind that report — as led by a group of federal prosecutors (played by John Hoogenakker, Jake McDorman and Peter Sarsgaard) and a frustrated Drug Enforcement Administration agent (Rosario Dawson).

Doing a scripted series also offered the “unique advantage,” Strong said, of putting the viewer inside of rooms with the Purdue executives “as they discuss their manipulative marketing campaigns.” Those scenes are not word-perfect recreations, Strong acknowledged, but they are based on mountains of pre-existing research from Macy, who is an executive producer and helped write the series, and on additional research by Strong, Macy and others.

“This is a piece of art, with actors saying dialogue,” Strong said. “But I used those scenes as a conduit to get facts out.”

At the moral center of “Dopesick” is Dr. Samuel Finnix, a family practitioner in the fictional Appalachian town of Finch Creek, Va., played by Michael Keaton. (His character, like several others, is an amalgam of several real-life people.) Finnix is persuaded by aggressive Purdue salespeople that OxyContin is a miracle drug — a powerful, long-acting painkiller that they insist is addictive in less than 1 percent of people who take it as prescribed.

Rosario Dawson plays a D.E.A. agent who in the 1990s begins to notice a troubling pattern of addiction to prescription opioids in rural areas. Credit...Antony Platt/Hulu

Little does Finnix know that he, like so many real doctors, is being manipulated with false and misleading information about its addictive properties — including by a uniquely misleading F.D.A.-approved label. The label was based not on findings from clinical trials but on a theory advanced by Purdue that the drug was less addictive than shorter-acting pain killers.

The truth becomes clear as Finnix watches one patient after another — including an injured young coal miner played by Kaitlyn Dever — becomes addicted. Some of them die.

Keaton, who is also an executive producer, was motivated to participate in the series partly because a nephew of his died from fentanyl and heroin use.

“You become consumed by the addiction,” Keaton said in a recent phone interview. “It’s soul sucking. It takes really great people down.”

“I take pride in holding those people accountable for the victims of this opioid crisis,” he added.

When the series isn’t huddling with the investigators and victims of the crisis, it is wandering the board rooms and mansions of its beneficiaries, the Sackler family, whose fortune was estimated in April to be around 11 billion. At the fore is Richard Sackler (Michael Stuhlbarg), who must navigate family politics and government regulations in his drive to create a blockbuster drug and attain the company’s presidency.

Michael Stuhlbarg, center, as Richard Sackler. One “unique advantage” of doing a scripted series, said the show’s creator, Danny Strong, was being able to go inside the room with Purdue executives. Credit...Gene Page/Hulu

Strong decided early to make the U.S. attorneys’ investigation the “narrative spine” of the series, he said. He then decided that intercutting between Purdue’s internal machinations and the people suffering in Finch Creek would offer “a true understanding of what happened.”

Macy said she had persuaded Strong to hire the Kentucky novelist Robert Gipe (“Trampoline”) to ensure that the series depicted small-town Appalachia without stereotypes. She also brought numerous sources into the writers’ room, including former Purdue employees, and a doctor who discussed the pressure he felt from sales reps and his own addiction to the drug.

Strong and Keaton were both stunned to learn how the drug changes a person’s brain chemistry, even when taken as prescribed.

“The idea that your frontal lobe is altered and can take two years to get back from that shocked me,” Strong said.

With that in mind, Strong said he made “recovery and healing a major plotline in the last few episodes,” in hopes of destigmatizing treatment for opioid use disorder. For Macy, that meant emphasizing the effectiveness of medication-assisted treatment, in which addicts use a less dangerous opioid like methadone or Suboxone to regain their lives.

It also meant being sure to include certain details to help clarify the record, like Richard Sackler’s well-documented directive in a 2001 email to “hammer on abusers” and portray them as culprits.

“They blamed the wrong people and got away with it,” Macy said. “I hope people will understand that many people were addicted through no fault of their own but because of Purdue pushing the message that opioids were now safe. I hope the show opens hearts and minds about who the real criminals are.”

Protesters in 2019 outside a courthouse in Boston, Mass., where a judge heard arguments in a lawsuit against Purdue Pharma.Credit...Charles Krupa/Associated Press

Ryan Hampton, a former campaign staffer for Bill Clinton and the author of the new book “Unsettled,” about the opioid crisis, agreed; he said the series could help Americans see that the drug abusers were not the problem.

“We didn’t do this to ourselves,” said Hampton, who was injured while hiking in 2003 and prescribed opioids. He became addicted, abused OxyContin and eventually heroin, then lost his job and home before getting sober in 2015.

“This was about folks in boardrooms bringing death and destruction to our communities,” he added. “Having recognizable faces in those roles can be transformative in shaping more positive attitudes.”

But Strong and Macy made certain that “Dopesick” looked beyond the behavior of Purdue Pharma to a federal government that often turned a blind eye — or worse — to potential dangers while letting the campaign finance dollars roll in.

“The Sacklers are the micro view of the story,” Keaton said. “But the macro is looking at all the corporations that have caused exponential damage, especially to lower- and middle-class people and their communities.”

Randy Ramseyer, the assistant U.S. attorney played by Hoogenakker in the series, said in an email that he didn’t want viewers to “blame one family and forget all the systemic failures that cause our problems.”

“That mind-set won’t help us make changes to prevent reoccurrences,” he continued.

Little seems to have changed since the period of time covered by “Dopesick.” In 2016, Congress rewrote federal law in a way that severely constrained the D.E.A.’s ability to keep prescription painkillers out of the black market after a two-year, $106 million lobbying push from the drug industry.

Meanwhile, the Sacklers, protected for now by the bankruptcy settlement, remain one of the richest families in America. (Several states have said they will appeal the settlement.)

Ramseyer, who has not seen “Dopesick,” would not say what impact he thought the series might have. But he stressed the need for change.

“As a society, it appears we have learned nothing from that experience,” he said about the story of Purdue and OxyContin. “No one is paying attention.”