Pubs and restaurants must shut in NI at 11pm 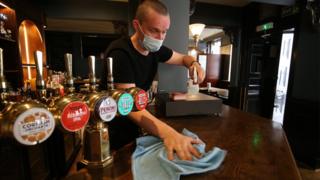 Image copyright PA Media Image caption Hospitality leaders had called for later closing times than the rest of the UK, where the curfew is 22:00

Pubs, hotel bars and restaurants will have to shut at 23:00 in Northern Ireland under new rules for the hospitality sector.

They will come into force from midnight on Wednesday.

Stormont ministers gave details of the decision in the assembly on Tuesday.

No alcohol or food will be served after 22:30 and all customers must leave by 23:00, said First Minister Arlene Foster.

She said there could be "no exceptions" to the rule, and it would also apply to weddings and other social events.

Hospitality leaders had urged a later closing time for Northern Ireland than in the rest of the UK, where it is 22:00.

Colin Neill, from Hospitality Ulster, said the announcement was "another blow to our industry".

"The sector is going to lose hours, its losing staff and it has lost live music and needs to be given a fighting chance," said Mr Neill.

"A curfew is not ideal, but we in the hospitality sector will do all we can to make this work, which hopefully will be only a temporary measure."

He said the measure must be kept under continuous review.

Mr Neill said his organisation had lobbied the government for a 23:30 closing time, in line with the Republic of Ireland.

"My biggest fear is that they'll just bypass my industry altogether," he said.

"They'll bypass the pub and go straight to a house party."

She stressed enforcement was a "priority" for ministers.

"We do not want to go there, we'd prefer that everyone works with us, but enforcement has a role," she added.

"We will be looking at the levels of fines we have."

The first minister said she regrets the time limit had to be imposed, but medical evidence showed "people socialising later in the evening is considered to increase the risk of the virus spreading".

"People adhere to rules less strictly in venues where they are used to less strict social distancing," she added.

In Northern Ireland, off-licences and supermarkets can sell alcohol until 23:00 most days. The cut-off is 22:00 on Sundays.

The executive said it had taken the decision to impose a 23:00 curfew in order to ensure a "consistent approach".

In England, there have been calls for a review of the 22:00 limit, which has led to scenes of crowds forming after closing time in cities including Liverpool and York.

Mrs Foster said the Stormont Executive had looked at the experience in other parts of the UK with closing times, and that she hoped it would not be replicated in NI.

"There is the allegation that people will leave the pub and go to a house party, but they cannot go to an off-licence or supermarket to buy alcohol after 23:00 so we felt it was a good idea," she told the assembly.

"We were conscious it's later in the Republic of Ireland, but we felt people will not travel across the border for such a short length of time."

There is still confusion about so-called beer bikes, which operate in parts of Northern Ireland, and whether they will be allowed.

Earlier this month, the executive said new hospitality restrictions would ban them, but Mrs Foster said it had not been resolved yet.

"Beer bikes are a particular problem, we are currently considering how to deal with it," said the first minister.

"Officials will be engaging with operators of those bikes but still needs to be dealt with, I hope we can deal with it sooner rather than later."