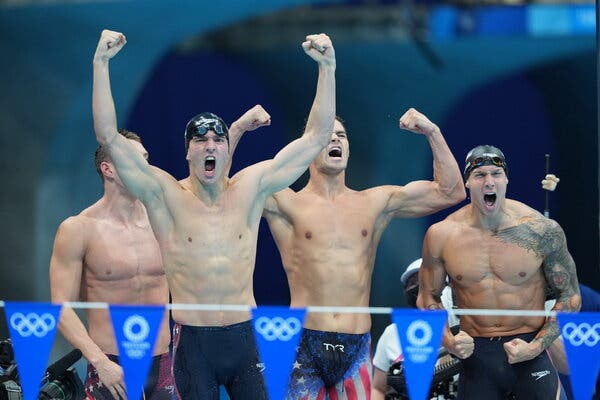 Emma McKeon of Australia became the second woman to win seven medals in a single Olympics, and Caeleb Dressel and Bobby Finke of the United States added more gold medals to the American haul on a frantic final day of the swimming competition at the Tokyo Aquatics Center.

The United States finished the meet by winning the men’s 4x100-meter medley relay in world-record time, giving Dressel his fifth gold medal of the Games and extending an American unbeaten streak in the event.

Dressel became only the fifth American to win five golds in a single Games, joining a list that includes some of the greatest Olympians in the country’s history: the speedskater Eric Heiden and the swimmers Mark Spitz, Matt Biondi and Michael Phelps. (Phelps accomplished the feat three times.)

In her first race of the day, McKeon emerged from a highly competitive field to take gold in the women’s 50 freestyle, finishing with a time of 23.81 seconds, an Olympic record.

By day’s end, she had won gold in both.

Sarah Sjostrom of Sweden came in second place in the 50 free (24.07 seconds), and Pernille Blume of Denmark, who won gold in 2016, took third (24.21). Abbey Weitzeil, the only American in the final, finished last.

Caeleb Dressel’s winning time of 21.07 seconds was 16 hundredths of a second off the world record.Credit...Doug Mills/The New York Times

Dressel opened the session by winning his fourth gold medal of the Games with a lung-busting sprint to victory in the 50 free.

Diving into the lead and never giving it up — or taking a breath — Dressel finished in 21.07 seconds, an Olympic record that was only 16 hundredths of a second off the 12-year-old world record in the event.

With his teammates cheering him from the stands, Dressel exploded off the block and never faltered. When he learned that he had won, he flexed his left biceps and then hustled out of the pool to prepare for the day’s final race, the 4x100 medley relay.

Dressel entered the pool Sunday having already won three gold medals at the Games, in the 4x100 freestyle relay, the 100 free and the 100 butterfly. His time in the 100 butterfly, 49.45 seconds, was also a world record.

The two short, explosive races then gave way to one of the longest of the Games, the men’s 1,500-meter freestyle. Bobby Finke, 21, of the United States won his second gold medal by prevailing in a three-man showdown with Mykhailo Romanchuk of Ukraine and Florian Wellbrock of Germany.

Finke hung close for most of the race and then slingshotted himself into the lead with his final turn, beating his rivals to the wall. He finished in 14 minutes 39.65 seconds, a body length ahead of Romanchuk (14:40.66) and Wellbrock (14:40.91).

The 1,500 final was missing the event’s dominant swimmer over the past decade, Sun Yang of China, who holds the world and Olympic records. Sun was barred from competing in the Games, or anywhere else, while he serves a four-year doping suspension.

Cate Campbell was greeted by her teammates after closing out the Australian win in the women’s 4x100-meter medley relay.Credit...Doug Mills/The New York Times

The session ended with two exciting medley relays. In the women’s 4x100 medley relay, Australia won the gold medal with a time of 3:51.60. The American women, who won gold in the event at the 2016 Games, settled for the silver. Canada took the bronze.

McKeon, who erased a small U.S. lead with her butterfly leg, and Cate Campbell, who delivered the final touch after a powerful closing freestyle, once again delivered an Australian victory. While McKeon picked up her seventh medal of the Tokyo Games — and her fourth gold — in the race, Campbell collected her fourth. She finished with three golds and a bronze.

History was on the line in the final event, the men’s 4x100 medley relay. The American men entered the competition having won gold in every Olympics they had competed in — they did not participate in 1980, when the United States boycotted the Moscow Olympics — and kept the streak alive with a world record, winning easily in 3:26.78.

Ryan Murphy, the world-record holder in the 100 backstroke, staked the Americans to an early lead, but Adam Peaty of Britain, the world’s fastest man in the breaststroke, immediately erased the advantage by the race’s halfway mark.

But the Americans were just too deep. Dressel powered back in the butterfly, and Zach Apple kept the United States streak alive with a strong closing freestyle leg.

Britain won the silver and Italy took the bronze.

Despite their dominance, the Americans had entered the race as underdogs, with Britain, which qualified with the fastest time (3:31.47), Italy and Australia looking to be the strongest of the rest of the field.

The Americans had nearly missed the final, in fact, qualifying seventh with a different set of swimmers. That left the team for the final — Ryan Murphy, Michael Andrew, Dressel and Zach Apple — in an outside position, in Lane 1, but a better-than-outside shot.

“We talked about the world record yesterday,” Dressel said. “It’s not something to be scared of.”