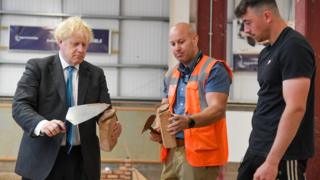 Boris Johnson has vowed "radical" changes to the education system in England to help boost the post-Covid economy.

The prime minister said the pandemic had "massively accelerated" changes to the world of work, and made training gaps "painfully apparent".

He said funding changes could help end the "bogus distinction" between academic and practical learning.

Labour said the plans would not reverse the impact of "a decade of cuts".

Speaking in Exeter, Mr Johnson said there was not "anywhere near enough" support for people who don't attend university.

He added that the government cannot "save every job" amid the Covid-19 pandemic, but wants to help people find new work.

The prime minister announced that adults in England without an A-level or equivalent qualification will be offered a fully funded college course.

Funding for courses offering "skills valued by employers" will be made available from next April, and a full list of the courses will be announced next month.

The announcement comes amid fears that unemployment is set to grow, as the economy slumps in the wake of the pandemic.

Mr Johnson said the pandemic had "compressed" a "revolution" to the jobs market caused by trends such as online shopping.

He added that although some jobs would fall away after the pandemic, he wanted people to take advantage of "new opportunities are opening up with dizzying speed".

The PM's speech comes as:

It will be illegal from midnight for people in large parts of north-east England to mix with other households indoors, as part of tougher coronavirus restrictions announced by Health Secretary Matt Hancock. The number of people worldwide who have died from Covid-19 passes one million, researchers say, with many regions still reporting surging numbers of new infections. Conservative backbenchers demanding votes in Parliament before any further coronavirus restrictions are introduced in England say they are hopeful an agreement can be reached with the government. Some MPs were invited to meet Matt Hancock on Tuesday, and said last night that progress was being made. Education Secretary Gavin Williamson is due to make a statement in the House of Commons later as thousands of students have been told to self-isolate following a surge in cases at universities. Retail union Usdaw says shop workers are being put at greater risk of violence, verbal abuse and coronavirus infection as a result of pubs shutting at 10pm.

This shows how much the Covid outbreak has changed everything around it.

This plan to give further education students a fairer share of funding goes all the way back to a report from Theresa May's time in office.

That was about tackling deep-rooted weaknesses in vocational education and reversing a lack of financial support.

But now - when this appears as a White Paper - expect it to be re-framed as a battle to retrain millions of adults whose jobs have been threatened by the pandemic.

Further education colleges will be put on the frontline of providing the type of modern skills that will be durable enough to withstand the changes that Covid-19 is making to the jobs market.

This could mean funding for digital skills, for instance, for those whose livelihoods are disappearing in retail.

With a winter of uncertainty about what happens next for many jobs - access to retraining for adults of all ages will be important as never before.

The offer of courses to adults without an A-level will be paid for from England's National Skills Fund, which the Conservatives pledged to boost by £2.5bn during last year's general election.

The government also says it wants to make higher education loans more flexible, with the aim of letting people "space out" their learning throughout their lives rather than in three- or four-year blocks, enabling more part-time study.

It said the changes would be backed by investment in college buildings and facilities, including more than £1.5bn in capital funding.

Further details will be set out in an education white paper later in the year.

In other plans, small businesses will be offered financial incentives to take on apprentices and £8m will be spent on skills "boot camps" in West Yorkshire, south-west England, Derbyshire and Nottinghamshire to cover sectors like construction and engineering.

This follows pilots in Greater Manchester and the West Midlands that focused on digital skills.

And the government's online Skills Toolkit, a collection of training resources launched in the spring to help people acquire jobs skills ahead of businesses reopening, will be expanded to include 62 additional courses.

Responding to the government's measures, Labour's shadow education secretary Kate Green said: "A week ago Labour called for a National Retraining Strategy fit for the crisis Britain faces, but what the government proposes is simply a mix of reheated old policies and funding that won't be available until April.

She added the plans would not give workers "the skills and support they need in the months ahead".

CBI director general Dame Carolyn Fairbairn said the "significant" unemployment coronavirus is leaving in its wake "only accelerates the need for people to develop new skills and adapt to new ways of working".

"The lifetime skills guarantee and flexible loans to support bitesize learning are a strong start but to really shift gears, this must be backed up by meaningful progress on evolving the apprenticeship levy into a flexible skills levy," she added.

The apprenticeship levy - introduced in 2017 - takes 0.5% of the salary bill from major employers that have an annual pay bill over £3m, with the intention of using the money to improve skills and provide training.

How would you benefit from this offer to do free courses? Share your experiences by emailing [email protected].